By steering clear of the obvious, Opening Ceremony has grown from a downtown New York boutique into an international fashion brand. 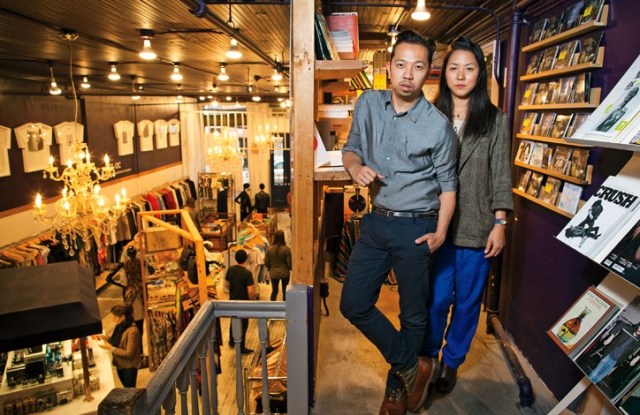 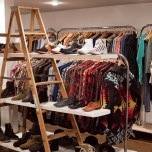 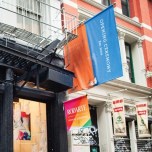 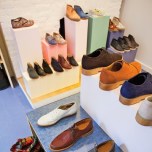 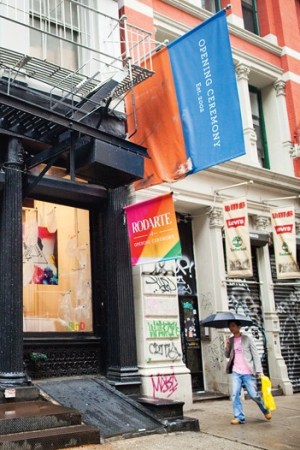 Opening Ceremony made its debut in 2002. 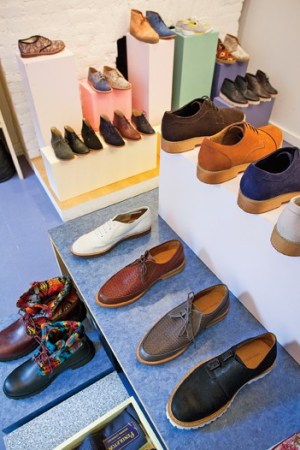 Despite the offerings, Huberto Leon says, “We’re not a trend-driven store.”

That’s the strategy that has turned Opening Ceremony from a trendy boutique in New York’s SoHo neighborhood into an avant-garde brand with a global cult following.

Since the store made its debut in September 2002, owners Carol Lim and Humberto Leon have demonstrated an uncanny knack for identifying fresh talent before it pops up on everyone else’s radar. They were the first to make full-blown commitments to collections by Patrik Ervell and Alexander Wang, just as they were ahead of the curve in selling Topshop products in America and importing Havaianas rubber shoes from Brazil. They formed collaborations with prominent style setters like Chloë Sevigny and Robert Clergerie, and their blog has emerged as a must-read conduit for cool.

“There’s so much out there,” Leon says. “We look for the super-unobvious.”

In the nine years since Opening Ceremony opened on the outskirts of New York’s Chinatown, the retailer has unveiled a small outpost at the trendy Ace Hotel in the Flatiron District; a 12,000-square-foot mini-mall in Los Angeles—complete with Alexander Wang, Band of Outsiders and Acne shop-in-shops and a separate accessories store, and an eight-story, 50,000-square-foot megastore in Tokyo. There are Opening Ceremony shops in Lane Crawford stores in Beijing and Hong Kong, and the company’s private label collection is carried in more than 300 stores, including Barneys New York and Colette in Paris.

Lim and Leon, both Los Angeles natives, have been best friends since they met while attending the University of California, Berkeley, in the Nineties. Leon, who studied art and American studies, has worked in retail since he was 14, starting as a clerk at the Gap. After graduation, he switched to the Old Navy division before Burberry recruited him to be head of visual merchandising in New York. Lim, whose degree is in economics, also moved east, to work as an investment banker, but when Bally was purchased by TPG Capital, she joined the luxury brand as a merchandise planner.

Then the duo decided to take a vacation together, in Hong Kong. Within days, they began to see business potential in their shared passion for shopping.

“We found so many different things: fashion, gadgets, street-market finds, vintage,” Leon recalls. Lim adds,“We met young, developing designers and established heritage brands.” As Leon tells it, their business plan started with a basic question: “Why don’t we bring this shopping experience to New York and sell everything under one roof?”

The concept, they decided, would be a sort of “modern-day Olympics,” where they’d unearth fashion finds from a different country every year and share their discoveries with like-minded people. Their merchandise mix would come from four different areas: established designer brands that exemplify a particular country, emerging designers, one-of-a-kind vintage pieces and select items from open-air markets.

Since they opened the original Howard Street store, the country of focus has kept shifting. Naturally the first year was Hong Kong. That was followed by Brazil, the U.K., Sweden, the U.S. (New York versus Los Angeles), Japan and then France. Coming in September will be Argentina. But once the designs are discovered, many are retained as part of the mix. “Once we feature a country, we continue with it,” Lim explains. “It becomes part of the home team.”

Leon says they choose the countries by thinking about where they’d love to travel—places with “a rich sense of culture. If there’s great food, there must be other great things.” The duo generally devotes two to three weeks to initial buying trips and “go back often,” Lim says. “We really embrace the culture and people.”

Before they settled on the U.K., they realized that most buyers were skipping London Fashion Week in favor of Paris. “So we said, let’s go to London,” Lim says. And there they found Gareth Pugh and Richard Nicoll—as well as Topshop, which was on fire but hadn’t yet ventured into America. Although Topshop has since expanded into the U.S., opening that first boutique was a “revolutionary idea” at the time, according to Leon. “They wanted their stuff next to cool designers, and to us it felt fresh and new. It was a very curated assortment and allowed them to test the American market.”

Leon emphasizes that Opening Ceremony is very “democratic” about its vendor mix and price points, avoiding any hard-and-fast rules. As a result, N. Hoolywood suits and Play Comme des Garcons T-shirts are merchandised next to Miss Kitty key rings and Maui and Sons surf shorts. “We’ll have a $15,000 dress next to a $4 item,” he says. “It’s a real high-low. It’s really more about the designer and the item.”

Despite its trendy image, he says, Opening Ceremony is “a family store” that appeals to everyone from a 14-year-old who discovers the brands on the Internet to young adults, their parents and even their grandparents. “We don’t look at it as an age,” Leon explains. “When we look in our closets, we see stuff from our parents and our friends. We have linen suits, tuxedos, beach clothes, sexy dresses. The store is undefined.”

Lim notes that, regardless of their age, Opening Ceremony customers want “the next thing.” But their interests aren’t limited to fashion: “They’re smart, intelligent people”—much like the store’s owners. Lim is a devoted foodie and both she and Leon love art, film and music. “We are consumers too,” Lim says. “We want to check out what’s new and we invite our customers to come on the ride with us.”

Lim, whose title is chief executive officer, tends to handle the business end, and Leon is creative director, but they continue to do the buying together. “We have the same goal,” he says, “to bring new things to the market and rediscover old things that are fresh.”

Yet Leon disputes the suggestion that Opening Ceremony is trendy. “We’re not a trend-driven store,” he says. “If anything, we go against the trend.”

Leon maintains that even when the brands sold in Opening Ceremony are carried in other retailers, the assortment is different. Last fall, for example, the store offered a line of Hickey Freeman suits, but ordered them made with British fabrics, like those that Hickey used in its early days. As its Web site noted: “We have teamed with the most classic and historic of American suit makers to produce an exclusive line of suiting re-imagined for a new generation of discerning men. These are pieces that use the best Hickey Freeman craftsmanship and tradition, with a perfectly adjusted fit.”

Opening Ceremony makes an effort to provide the history of the brands it sells. “It’s nice knowing the back end,” Leon says. “Our customers learn about everything they buy; it’s not just a shirt.”

Many of those customers are celebrities who wandered into the downtown store and became enamored with its eclectic mix. “They discovered us just like everybody else,” Leon says. Still, it helps that Lim and Leon spend a lot of time in the store. That led to a relationship with director Spike Jonze, who produced a video for the Opening Ceremony blog as well as a faux-fur collection based on his film Where the Wild Things Are. Jason Schwartzman and Kirsten Dunst have starred in short films to promote Opening Ceremony’s new collections, and Chloë Sevigny’s line for the store is now in its fourth season. “We dress people for videos or album covers,” Leon says. “It’s exciting to be part of popular culture.”

Surprisingly, the thirtysomething duo initially balked at expanding to the Web. “We were two of the last few lucky ones to grow up without the Internet,” Leon explains. “We remember how it was to look things up in a dictionary and to read newspapers and magazines on paper. So we resisted going online.”

But once they decided to take the plunge, they insisted the Opening Ceremony site complement the original concept. “Our stores are warm, friendly and fun,” he says. “So we asked ourselves, how do we translate that online? We didn’t want stagnant pictures, so we used our staff as models.”

More than three million new users discover Opening Ceremony online every month. “That’s scary,” Leon says. “But if you like our store, you’ll like what we’re doing because it’s us doing it. We’ll tell you about our favorite super-secret vintage store in Paris and other things we’ve discovered. Learning about things on a store’s blog is not the norm. We don’t use an outside firm to come up with content. This is the most accurate and true experience you can get.”

It also generates sales. Although Lim and Leon decline to provide an overall volume figure, they say men’s accounts for around 40 percent of sales, and the Web site is “a massive component of our business,” according to Leon—the second highest performer after Howard Street.

Although the mix in the New York and Los Angeles stores is 90 percent identical, the remaining 10 percent reflects differences between the two cities. “L.A. is not a walking city, so it’s more of a destination,” Leon notes. “Here, someone can come in three to four times a week, but in L.A., it’s more like once every one or two weeks. The pace is different. Here, they’ll buy a couple of things at a time, but in L.A., they buy in bulk—like Costco,” he says with a laugh.

Lim adds, “For us, it’s important to represent all the things we carry, so we will offer winter coats in L.A. You need all elements.” “We didn’t want to be an L.A. store,” Leon interjected. “We didn’t want our fans to go there and think it was some weird L.A. version of what we do.”

The same applies to Tokyo. In 2009, the Opening Ceremony department store made its Japanese debut through a partnership with Onward Kashiyama. “There’s one store now, but we expect it will grow into other parts of Tokyo,” Lim says.

Unlike the Tokyo store, which is massive, the shop at the Ace Hotel is more like a gift shop. “But it works really well,” Leon says. “So depending upon where we are, we can do different versions. We want to be as flexible as possible.”

Meanwhile, the company’s private label has shown mounting potential. It currently represents less than 10 percent of Opening Ceremony’s merchandise assortment, but since 2005, the line has also been available at other stores, including Barneys New York, Bergdorf Goodman, Lane Crawford, Harvey Nichols, Browns, Colette and Dover Street. “The brand has become its own business,” Lim says.

So are Leon and Lim surprised by the rapid success of their brand?

“We just acted by instinct,” says Leon, “and reacted to the momentum of the company. What started as a simple project between two friends has been embraced in a wholehearted way.”

Neither he nor Lim believes that the brand has peaked, in the U.S. or overseas.

“We can see six stores in New York, and we see ourselves challenging all kinds of retail,” Leon says. “There’s so much out there and our to-do list is so grand, so we can pick and choose what to do next.”