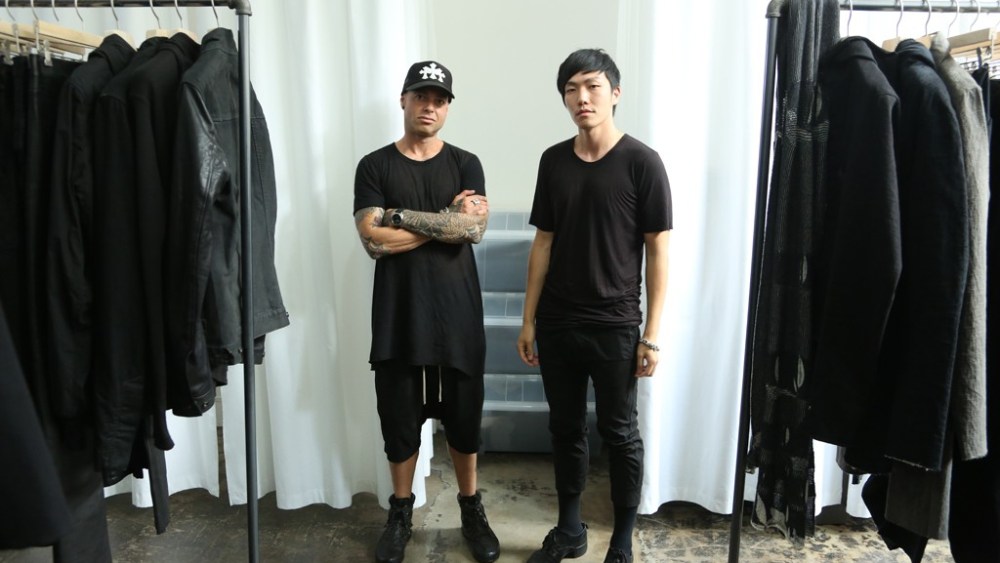 NEW YORK — Gray markets refer to the trading of goods through legal but unofficial paths, ones that original manufacturers may not have intended. It’s those irregular methods — when sourcing clothing, particularly — that gave Alex Kasavin and Wei Du the tongue-in-cheek name for their recently opened boutique at 242 Wythe Avenue in Williamsburg, Brooklyn.

“The name [Graymarket] is a jocular way to explain our unconventional approach,” said Kasavin, who cofounded the store with his partner Du. Kasavin, who also runs Coeur Noir, a specialty printer and letterpress company, met Du, a fashion design student at Parsons the New School of Design, several years ago. The two frequented the forum StyleZeitgeist, an online community where followers of avant-garde fashion and culture congregate for discussion.

“We had a network of friends,” said Kasavin. “We were all collectors, buying, selling and trading clothing, and at some point, we realized that what started off as a hobby and a passion could become more. This [retail concept] grew out of that idea.”

At Graymarket, Kasavin and Du sell men’s and women’s clothing and accessories from cult designers like Guidi, Paul Harnden, Lost & Found, Number (N)ine, Undercover, Maurizio Amadei and Carol Christian Poell alongside luxe pieces from Givenchy, Balenciaga, Haider Ackermann, Rad Hourani, Gareth Pugh and Maison Martin Margiela. The clothing — all from designers’ past collections — is unworn with tags, in mint condition. Basics start at $100 and higher-priced leather pieces cap off at around $2,000.

“It’s sort of deadstock, what we consider archival,” explained Du. “We select significant pieces from each designer, pieces that are iconic, that we think are representative of a particular season or designer. Obviously, we have a very dark palette.”

Kasavin modeled a Rick Owens men’s blazer in a thick, almost velvet corduroy, priced at $850. “It’s not something you’d associate with Rick. We like things like that. We like unusual pieces,” he said.

Buying the clothing, Kasavin said, is “the fun part.” After years of hunting down pieces from obscure designers (“There was a time when clothing like this was made in smaller batches, much more scarce than it is now.”), the two partners combined their international networks of other collectors, fans, proprietors of stores and in some cases, even designers themselves.

“Things here come from all over the place,” said Kasavin. “We’ve found people with personal collections that rival the inventories of stores. We never know where the next thing will come from….It keeps us on our toes,” said Kasavin.

The 650-square-foot space, housed not in a standard storefront but on the ground floor of a 20th-century office building, is an off-the-radar destination for those not in the know. Customers ring a buzzer to enter the industrial, all-white room flooded with diffused natural light. It’s an almost clinical, gallery-like setting, that — aside from a mounted neon sign in Chinese lettering — is devoid of embellishment, much like the muted clothing. The store operates on an appointment-only basis during the week, with normal store hours on Fridays and Saturdays.

While the partners eschew e-commerce in favor of a physical shopping experience, they may launch a lookbook via Tumblr to showcase the store’s one-of-a-kind wares. They also plan to amp up their accessories offerings.

Brooklyn, though home to artisanal-everything (granola, horseradish, jam), is lacking in high-end designer clothing. “There’s nothing like it here,” said Kasavin. “While the neighborhood is certainly developing in a very different way, we still feel that it has an industrial vibe that we can very much relate to. We feel like this kind of clothing makes sense with the landscape here.”

Kasavin remembered an older couple who made an appointment at the store and arrived wearing preppy, business casual clothing. They outfitted the gentleman in a full head-to-toe look, something Kasavin feels strongly about being able to provide his clients.

“When he put it on — and some people feel really unnatural — you saw him walking around with this confidence,” Kasavin said. “It’s fun to see people discover for the first time. It can be a transformative experience.”