The standing-room only group that turned out to honor Clifford Grodd included giants in the men’s wear industry, both past and present. 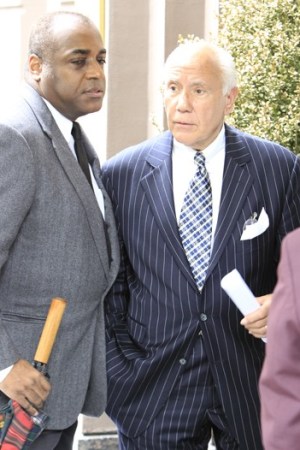 The standing-room only group that turned out at the Frank E. Campbell Funeral Home in Manhattan Thursday to honor Paul Stuart president and chief executive officer Clifford Grodd included giants in the men’s wear industry, both past and present. Ralph Lauren, Alan Flusser, Joseph Abboud, Jeffrey Banks, Sal Cesarani, Marvin Traub, Phil Miller and many others came to the memorial service to celebrate the life of the legendary retailer who died Tuesday.

“Looking out at all those suits out there would have made him happy,” his son, James Grodd, said during the eulogy.

In addition to his son, the hour-long service included tributes from Grodd’s daughter, who read a poem she penned for her father; his son-in-law; brother; cousin, and college roommate. All of them spoke of his incredible determination and the passion that permeated everything he did. “His business philosophy was not to be the biggest, but be the best,” said his son-in-law Michael Stone.

The service ended with the casket being carried out of the room with Grodd’s signature brown hat perched on top.

On the way out, many attendees walked past the Peter Elliot men’s store across the street where the owner, Elliot Rabin, had installed a tribute window to Grodd, complete with a pinstripe blazer, white pants, sunglasses and a photograph of a World War II fighter plane, similar to the one in which Grodd was shot down in during the war. A sign read: Clifford Grodd, 1923-2010, Thank You Cliff, Elliot.