Some 15 to 20 people protested in front of the retailer's flagship Wednesday afternoon. 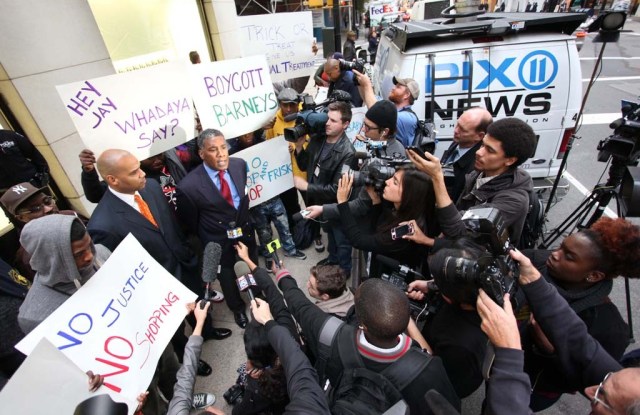 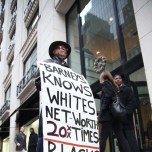 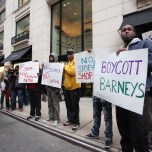 NEW YORK — Some 15 to 20 people protested in front of Barneys New York’s flagship Wednesday afternoon carrying signs such as “Boycott Barneys,” “No Justice, No Shopping” and “Hey Jay, Whadaya Say?”

“We are disenchanted with what’s happening at Barneys. We are here to boycott Barneys until they make some adjustments in their security detail and policy,” said Clinton M. Miller, a pastor with the Brown Memorial Baptist Church in Brooklyn. He said he was standing in solidarity with Trayon Christian and Kayla Phillips, two African-Americans who were questioned by officers from the New York Police Department after making expensive purchases at the Barneys flagship. Christian has filed a discrimination lawsuit against Barneys, the city and the NYPD, while Phillips has filed a $5 million notice of claim. Miller said his congregants plan “to be here intermittently unless a resolution is brought forth.”

On Tuesday, Mark Lee, chief executive officer of Barneys, said at a press conference with Rev. Al Sharpton, “Our preliminary investigation concluded that, in both of these instances, no one from Barneys New York raised an issue with the purchases, brought them to the attention of internal security or reached out to authorities.” Lee pledged to terminate anyone found to have committed any kind of profiling in a second, fuller investigation being conducted by Michael Yaki, a civil rights expert who serves on the U.S. Commission on Civil Rights.

“There is a broader issue that needs to be addressed and Barneys New York is committed to be part of the solution. We look forward to collaborating with community leaders and the broader retail community to bring about positive change,” Lee said at the press conference.

On Wednesday, one of the protesters, Deyshaun Clouds, who was carrying a “Hey Jay, Whadaya Say?” poster, said he wanted “Barneys to stop being racist.” Tyriek Dillard of Brooklyn added, “Hopefully they’ll stop racial profiling and let people be. Obviously, people come into the store and have money. I want them to stop doing what they’re doing. I won’t shop there now.” Mary Bethea, who was wearing a Ferragamo belt similar to the one Christian had bought, said that when she shops at Barneys “a lot of eyes are on me, but I never got stopped. They wanted to say something to me, but I bought the belt. I felt it’s not fair, and it could have happened to me.”

Rev. Conrad Tillard of Bedford-Stuyvesant said, “Barneys is wrong. No one in the city of New York is qualified to analyze a person’s dress or manner to determine how much money they have.…I won’t sit by. People have the right to come to any store in the city.” He also noted that “Jay Z should be vocal. The kids who are coming in here look up to him as a leader.”

Jay-Z has linked with Barneys in a holiday promotion to raise funds for the Shawn Carter Foundation.

Rev. Dennis Dillon of Brooklyn said he came to the protest to express his “outrage and concern” about this issue. “Black people in America and New York are not poor. We don’t want to be suspects.” He said blacks have $141 billion in buying power in this city and account for 41 cents of every consumer dollar spent in the city, outside of tourism. “We want the right to shop wherever we want without being profiled.” He said he was calling on Barneys’ owner, Richard Perry, and Lee to address the issues here.

Dillon said he looked at the Barneys’ employees, “and there are hardly any blacks in senior management positions. There are 300 designer brands, and no black designers or manufacturers within the products on their shelves.” He said he has done a report of top places where black New Yorkers purchase shoes, and 11 percent replied Barneys. “We’re calling for justice and were asking for righteousness,” he said. We’re calling on people not to shop at Barneys New York this holiday season. We need to end racism in America.” He said the reverends would be delivering a letter to Lee.

Eric T. Schneiderman, New York’s Attorney General, has asked Barneys and Macy’s to provide information about their policies for detaining and questioning customers based on race by Friday. There have been allegations of racial profiling by African-Americans shopping at Macy’s. In a letter to both Barneys’ Lee and Macy’s Inc. chief stores officer Peter Sachse, Kristen Clarke, bureau chief of the Civil Rights Bureau of the attorney general’s office requested such information as the stores’ policies and procedures for stopping, detaining and questioning its customers; the total number of stops and detentions of customers between Oct. 15, 2012 and Oct. 15, 2013, by race; the store’s policies and procedures for contacting law enforcement regarding its customers; customer complaints received within the last year relating to discrimination on the basis of race, and stops, detentions and/or questioning of customers by or at the request of store personnel.

A spokeswoman for Macy’s said Wednesday, “Yes we are in receipt of the letter and we are fully cooperating with the Attorney General’s request to provide the document’s he’s requested.”

Barneys’ Lee said at the press conference Tuesday that he will be fully cooperating with the Attorney General’s office.