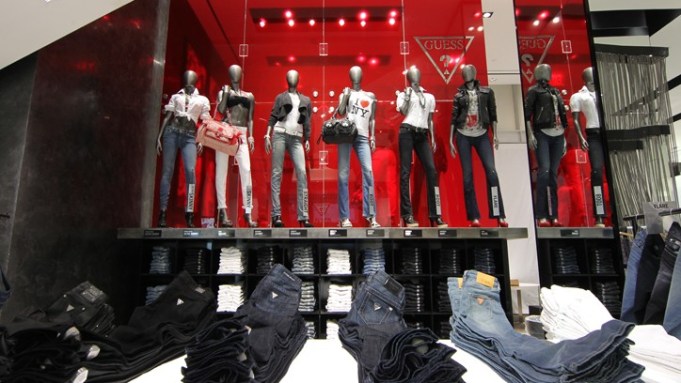 Described with superlatives such as first, biggest and premium, the 13,000-square-foot, two-level unit at 575 Fifth Avenue and 47th Street is primed to do hefty sales volume. For starters, it’s the largest Guess store in the world.

“This is a big step for us,” said Paul Marciano, vice chairman and chief executive officer of Guess Inc. “We’ve never had a major location on Fifth Avenue. We found a store that’s a little bit big, but it will cover every avenue of our business. We have collection of lingerie and underwear, but because of space issues, we’ve kept it in Europe and Asia. I will [now] have the space.”

And it’s not the only splash Guess is aiming to make in Manhattan. Marciano said he’s also looking to open stores on 34th Street, Third Avenue and in the Flatiron District.

The flagship boasts the first Guess dress department, the largest collections of footwear, jewelry, accessories and, of course, denim. There’s women’s and men’s apparel, Guess by Marciano and eyewear. Exclusive to the Fifth Avenue location is an international jewelry collection that until now has been sold only in Guess accessories-only stores overseas. The collection of classic jewelry is more expensive than the existing trend-driven line and features animal pendants, charm bracelets and a rhinestone necklace with teardrops and hearts, $128, designed specifically for the Fifth Avenue store.

A group of handbags exclusive to the store ranges in price from $118 for small to $148 for large, and features a Guess logo plaque and chain strap with ribbon woven through. There’s a greater range of watches, an important category for the brand. The Guess line starts at $120, while the Guess Collection of Swiss-made watches is priced from $350 to $2,700 for a limited edition automatic version.

The Guess flagship represents a new (relatively) low-key approach to denim and visual design. Jeans, priced from $89 to $158, have fewer embellishments, according to a spokeswoman.

While the flagship has many slick surfaces — and a two-story glass elevator swathed in metal mesh, the company said it toned down the high-gloss finishes. An example is the silver-leaf wallpaper in the dressing rooms that looks like distressed stone tiles. The same wallpaper appears on ceilings above the chandeliers, which are also covered with metal mesh. Steel display blocks were custom-finished using a chemical wash. There are nods to Guess’ heritage throughout the store, including an area rug made from 500 leather and metal-studded jean patches. A vintage tufted black leather sofa and chair sit on top of the rug in a “lounge area” along with a Deco mirrored coffee table replete with a vintage camera and books of Guess images.

The shop marks Guess’ arrival in Manhattan, although the company has been operating smaller Guess and accessories-only stores in SoHo, and the South Street Seaport, here.

When the Marciano brothers founded Guess in 1981, $50 million in sales was seen as a benchmark for success. “We never thought we’d [accomplish] it,” Marciano said. Guess’ worldwide sales in 2010 were $2.1 billion.

The company plans to open at least 50 stores in China in the next 12 to 15 months, unveil 30 accessories units this year, build G by Guess for 14- to 23-year-olds into a 58-unit chain in three years and relaunch its kids’ business with 15 new stores. There’s also interest in a home business.

With a presence in 87 countries, Marciano said international accounts for over half of Guess’ business.

“We’re making a strong investment [in Asia] and are putting a great focus on building a management team,” Marciano said. “China has been a priority for many companies, including Guess. We have 65 stores there already.”

Guess exited the Japanese market four years ago, but intends to go back within the next two years. “It’s a difficult market,” Marciano said. “We believed we knew Japan. We had a small licensee, but it didn’t work to our expectations. Next time, we will have control of our image, product, marketing and advertising. Our partner will handle operations, real estate and back-end office functions.”

Marciano sees Europe as having the biggest growth potential. “The brand is so well known and well accepted,” he said. “We want to develop Northern Europe — Germany, Scandinavia and the U.K. We have no presence in Brazil, but we’re talking to two potential partners there.” Guess has long had a presence in Singapore, Thailand, Malaysia, the Middle East, Central America and the Philippines.

“We’re continuing to expand in the U.S.,” Marciano continued. “We are making sure we don’t repeat the mistakes of the past.”