Guess to Take Sean Wotherspoon-Curated Farmers Market on the Road

Round Two’s Sean Wotherspoon brought in Chinatown Market, Pleasures, Utmost and Carrots among other brands for the Cinco de Mayo launch of his Guess collaboration. 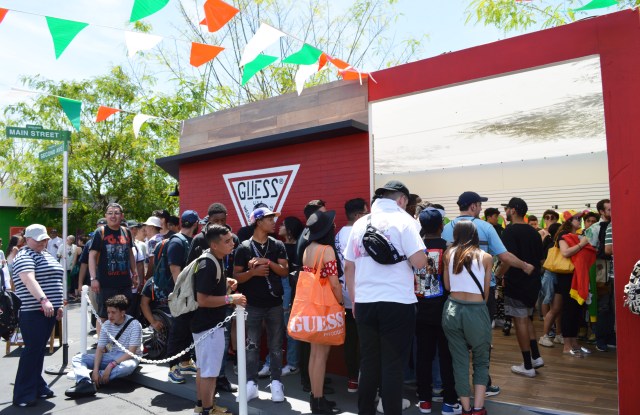 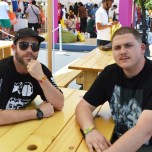 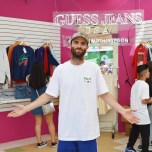 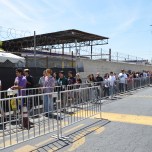 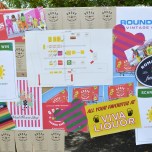 LOS ANGELES — If lines forming hours before opening — in nearly 90 degree weather, no less — is the new metric supplanting sales per square foot, Guess may have nailed it with the weekend’s kickoff to what will be a roaming, streetwear-inspired Farmers Market.

The concept began as a means of launching the Guess Jeans USA division’s collaboration with Sean Wotherspoon, owner of the Round Two boutique, but clearly morphed into something more. The new collaboration, a cross of Eighties and Nineties Guess with a brightly colored punch of hues inspired by California’s agricultural roots, became one of several releases at Saturday and Sunday’s event that drew crowds to Guess headquarters in downtown Los Angeles.

“I’m vegan. My whole family’s vegan so it’s something that I feel pretty passionate about and I think it related well to clothing and the tie into a farmers market instead of a pop-up shop was able to include a lot of the community,” said Wotherspoon Saturday as he sat at a picnic table at the Farmers Market. “A lot of the colors I used for the Guess stuff are directly referenced from fruits and vegetables. We took the exact Pantone, re-created that and used overdyes. I wanted it to be super bright and start the summer off with crazy colors and give everyone that centerpiece for their summer outfits.”

A line began forming around 7 a.m. Saturday and ran down the block. Attendees who registered for the free marketplace awaited Wotherspoon’s drop, along with the releases of other limited-edition and exclusive items, such as The Pancake Epidemic founder Darren Romanelli‘s  reworked pieces and a collaboration with Guess Jeans and Medicom Be@rbricks, along with Carrots sweatshirts and long-sleeve crews bearing the denim company’s logo. Other brands there included Pleasures, Utmost, Chinatown Market, Cali Thornhill Dewitt, Fontaine Cards, Pintrill and Sandal Boyz.

“We tried to curate it well with the brands we included — no one too big. A lot of the brands are just friends of mine and [the collaborations are] different pieces of Guess’ history,” Wotherspoon said. “This is fun. It doesn’t make you feel as much like a consumer. You’re not on Rodeo or Melrose in front of a store and there’s 10 other stores. It’s an organic consumer and it’s kind of cool.”

Inside the market, lines snaked outside the booths of brands such as Pleasures, Fontaine, Chinatown Market and Guess while some attendees shopped fresh produce and vegetables from Sage Mountain Farm or noshed on tamales, hot dogs, agua fresca and other fare from food vendors.

“Everyone in the world, no matter who it is, you want something that makes you feel unique, whether it’s a vintage item or a new item,” said Wotherspoon, who is set to open his next Round Two store in Miami. “If someone’s able to tell you for sure, ‘Hey, this is only happening here. If you can make it to this event, you’re going to be the only person wearing this,’ it just feels good. This is a really new take and I think it really excited people.”

In fact, the original plan called for the Wotherspoon collaboration to launch at a more traditional pop-up format, explained Nicolai Marciano, who handles brand partnerships and specialty marketing at Guess. That idea, originally conceived late last year, then evolved over time from a farmers market-themed pop-up to a booth at an actual farmers market in downtown before the idea of taking Lot 5 at Guess headquarters to turn it into their own market.

“It’s the community. It’s an experience,” Marciano said. “You sell something to a store, like a wholesale account and there’s nothing special about that. It’s very transactional. Here, you’re creating a story around the clothing that’s dropping and an experience that’s happening and that’s ultimately where our demographic and the youth wants to connect these days.”

It’s also a highly personalized experience, Romanelli said, sharing a picnic table with Marciano in the shade outside of the sweltering heat.

“It’s being able to really lock into a moment and create energy,” Romanelli said. “It’s that vibe that I think the youth is more interested in than traditional retail drops and this is definitely their own version because there’s history on this lot. This office has been here for 30 years so the idea of being able to anchor this moment on the back lot, connected to the history, and that whole idea of tapping the archive and contemporizing the archives, it’s nice.”

Romanelli has worked with Guess on a few collaborations now, with 30 Medicom bears inspired off of Wotherspoon’s Farmers Market color story made for the weekend event. Another 20 went on sale Friday night in Tokyo.

Marciano confirmed the Farmers Market concept will now travel to other cities and countries.

He confirmed the concept will move to various regions in different sizes and capacities, although declined to get into too many specifics about the broader game plan there.