H&M has plans for the U.S. that include smaller concept shops, improved interiors to better segment merchandise and more stores in Manhattan. 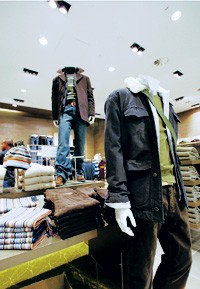 On the agenda: smaller “concept” shops featuring narrower assortments that might just have men’s wear or kids, improved interiors to segment the merchandise better, and accelerating the pace of openings.

In addition, H&M wants more stores in Manhattan, where there are already seven.

The Stockholm-based fashion retailer, which has over 1,000 stores worldwide, has had an erratic four-year ride in the States since its flagship debut on Fifth Avenue and 51st Street in 2000. Profits have been elusive and the pace of store openings has slowed. The fact that the lease for today’s big opening — a 19,816-square-foot, two-level store in the Bloomberg Tower at 731 Lexington Avenue — was signed around the same time as the Fifth Avenue store underscores the challenges of entering new countries.

But for the opening on Lexington Avenue, H&M brought its top executives into town to celebrate, and spotlight the strategy shifts. The chain has 74 units in the U.S. and has been focused on opening stores in the Northeast and mid-Atlantic regions, Chicago and California.

“In Europe, we have opened some concept shops for men and children,” said Rolf Eriksen, chief executive officer of H&M. “I think it’s in the future for the U.S. We are testing some stores and in Germany, we have two special stores for men. We’ll see more of them, in Europe and the U.S., but I can’t tell you when.”

A handful of concept shops with more specialized assortments are in other countries, including Spain and Italy.

Start-up costs, he explained, have made it difficult for the U.S. operation to be consistently profitable. The U.S. operation did post a profit in the first quarter, but later lapsed back into the red.

“We had to spend a lot of money in the beginning to build a big infrastructure,” he said. “When we entered the U.S. market, we knew it would take time,” to turn profitable, he said. “For now, it’s not so important to be profitable. It’s more important to see if we are on the right track, and we have been satisfied for the last couple of years. At the moment, business is running very well in the U.S. Lexington Avenue is a great position, one of the best in New York. We signed the contract four years ago and have been looking forward to this opening.”

The Lexington location, like some other recent downtown sites, has an “upgraded” look, compared with stores situated in malls, Eriksen explained. “It’s the same way in Europe. With downtown stores, we do a little more with the lighting, and there’s more panels on the walls.”

Eriksen also said there’s greater “clarity” to the stores, as well as color, making it easier to shop. Chandeliers, lamps and curtains adorn the Lexington Avenue store, as well as wood paneling and higher-grade fixturing that projects a more masculine ambience for men’s wear.

“Our mall stores have a more similar look than the stores we have in Manhattan,” noted Sanna Lindberg, H&M’s country manager for the U.S. “Flagships always look a bit different, and every store that we open has a new touch to it.”

The Lexington Avenue store, which displays the complete H&M assortment including men’s, women’s and children’s apparel, outerwear and accessories, is the seventh H&M unit in Manhattan. It will also feature Karl Lagerfeld’s collection for H&M, slated to be distributed at select H&M stores beginning next month. Asked how it will be displayed, Lindberg replied, “We don’t want to go into detail. It’s important that it’s a surprise.”

According to Lindberg, the company is intent on opening more stores in Manhattan and is interested in Union Square, the upper West Side, the Flatiron district and possibly additional units in SoHo and Harlem.

Generally, H&M seeks 17,000 to 23,000 square feet for high-traffic, city locations, whereas concept shops would be roughly half the size, Lindberg said.

This year, the plan is to add just nine stores in the U.S., a slowdown that Lindberg attributed to challenges revolving around manpower. She added that there has been a high rate of turnover of U.S. staff, particularly young sales people, whereas in Europe, it’s not quite so high. “The turnover is not that high for managers,” she said, adding that she believes H&M’s turnover rate is no worse than other retailers.

She acknowledged that profitability partly rests on building a bigger base of stores. “We have to grow and have more stores,” Lindberg stated.

Sales would even be better, Lindberg said, if U.S. consumers had a fuller awareness of H&M’s offerings. The brand is sometimes perceived narrowly as a hip, youthful ladies’ line, she said. “There is much to explain. The collection is quite broad. We have garments for everyone; for kids, teenagers and men.”

She said the company has begun devising strategies to heighten awareness of the complete collection, such as fashion shows, and more creative ways to present the merchandise. Not surprisingly, bestsellers pointed out by the staff were concentrated in the women’s areas, and included women’s tweed wool coats, priced $69.90; wool sweaters with fake fur collars, at $19.90; tweed wool pants, $34.90; lingerie-inspired tops, $19.90, and velvet blazers, priced at $55.90.