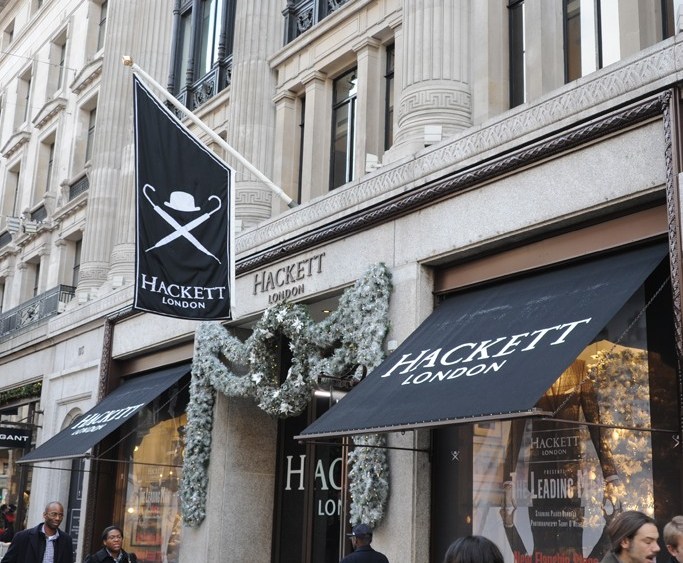 LONDON — Hackett London will this week open its largest store ever, an 8,934-square-foot space infused with theatrical flair, British pride — and Beefeater gin.

The store is located on one of the hottest shopping strips in London: Regent Street, where J. Crew opened its first European flagship earlier this month, and which is home to Burberry’s largest store.

“We’ve grown up — and we are a major player now. We wanted this to be a big statement: it’s younger and cooler than our Sloane Street store,” said Jeremy Hackett, founder and chairman of Hackett London, which is owned by the Spanish investment company Torreal, whose portfolio includes Pepe Jeans.

Hackett is located in the former Ferrari brand shop at 193-197 Mutual House, and other neighbors on the street include Hamley’s, L’Occitane en Provence, Brooks Brothers and Jaeger. A smaller Hackett unit a few yards away will close when the flagship opens on Friday.

The store’s centerpiece is a big staircase that joins the three floors. The steps have a Victorian, industrial feel with bronze and nickel hardware, and Hackett said it reminds him of “old London, and rising from the depths of the Tube station.”

The ground floor is dark and moody, with floors done in black-and-white granite and limestone, while the walls are made from Georgian-inspired wood paneling.

The floor has been designed with an English countryside theme, complete with taxidermy foxes, falcons, badgers and a big stag’s head mounted above the cash registers.

There is also a “living wall,” covered in real ivy and moss. Customers need to enjoy it while it lasts, as the ground floor decor will change four times a year. Next up is a “rain showers” theme, to feature raincoats and umbrellas.

A company spokesman said Hackett has a warehouse packed with props for its various stores, and they will be rotating in and out of the ground floor.

The ground floor stocks the sportswear collections, while the lower ground one is dedicated to boys’ apparel and Hackett’s various sponsorships. The boys’ area is dominated by a giant, gnarled tree with a thick trunk and a tangle of branches that extend across the ceiling. The tree was created by the same company that worked on the Harry Potter film sets, and features a little boy mannequin swinging from one of the branches, while some of the walls are covered in bright green moss. That space will change, too, and be decorated with a circus theme in a few months’ time.

The boys’ area is filled with vintage suitcases and toys — such as pedal cars — and more modern fare in the form of iPads for young customers’ use. Hackett said that, soon, the store plans to invite customers’ kids to join a drawing competition, and the winner will have his work printed on a limited number of T-shirts.

There is a separate space on the lower ground floor that stocks merchandise related to the brand’s collaboration with Aston Martin and various sponsorships, such as the London Rowing Club.

The top floor houses suits from Hackett’s premium Mayfair label, which has a higher armhole and a slimmer silhouette, as well as the formalwear collections. Mayfair is priced 20 to 25 percent higher than the main collection.

There is also a dedicated accessories room — a first for the brand — and a corner where customers can have leather goods hot-pressed with monograms or personal messages, or have their initials stitched onto shirts.

To mark the opening, the store will offer limited-edition scarves and leather goods, trousers printed with a map of 19th-century London, and polo shirts with “London W1” — the store’s postcode — printed on them.

“We really wanted to emphasize the British-ness of the brand with the limited editions,” said Hackett, adding that he sees the personalization service as a kind of “collaboration with the customer,” and he hoped the monogrammed products will become “heirlooms.”

The floor also has a long, glossy wooden bar, with gray flannel covered stools. The bar, a collaboration with Beefeater Gin’s 24 label, will serve hot and cold drinks as well as cocktails to customers. It will offer free Wi-Fi, and customers will also be able to recharge their phones and various devices there while they shop.

Vicente Castellano, managing director of Hackett London, said the store would allow the brand to “shout about” collections such as children’s wear.

He declined to give first-year sales projections, but according to real estate sources familiar with the area, prices for prime space on Regent Street are in the region of 650 pounds, or $1,036, a square foot. Castellano said he expects the new store to generate double the sales of the current Regent Street unit in year one, and triple the sales of the smaller store going forward.

Hackett is in expansion mode: Over the next few months there is a new unit planned for the Passeig de Gràcia in Barcelona, and a third Paris store. The company is looking for a site in Lisbon. A second store will open in Singapore, while the brand plans to double its number of units in Mainland China to eight, although Castellano said he is seeking “controlled growth” in that region. There are two stores in Hong Kong, as well as a string of units in South America.

The U.K. remains the brand’s biggest market, generating about 20 percent of sales.

Castellano said Hackett is particularly focused on Mayfair and premium accessories, an underdeveloped category for the brand, and he said the aim going forward is to create a bigger and more innovative range.

Hackett London has recently taken on an in-house accessories design team and their first efforts will be on show in January at London Collections: Men.

Asked about how long Torreal — which purchased Hackett from Compagnie Financière Richemont in 2006 — planned to hang onto the brand, he said the company’s vision was a far-reaching one.

“When we bought Hackett, we understood the incredible potential of this company, and today we are not even halfway to where we want to be,” said Castellano. “One day, we’ll think about selling it, but that day is still far away.”