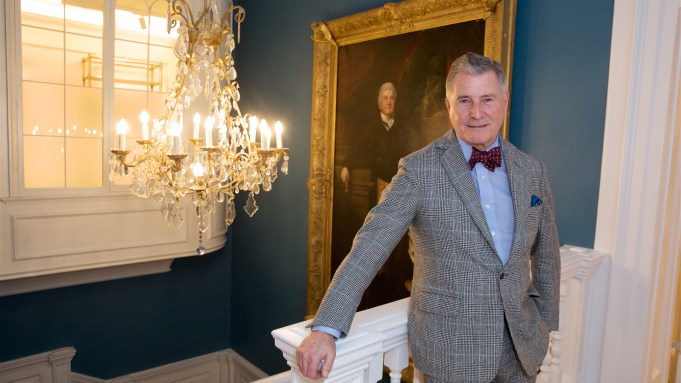 LONDON — Jeremy Hackett has come full circle. When he first moved to London from his native Bristol, Hackett got his first job on Savile Row, and then opened a store selling secondhand suits and accessories, many of which were sourced from Savile Row tailors. Now he is debuting his brand’s store on the famous tailoring street.

The new space is located on 14 Savile Row, a Georgian building that previously housed the Hardy Amies studio, and has now been restored as the home of Hackett’s offices, design studio, a club room and other spaces dedicated to made-to-measure and bespoke services.

“I’ve always wanted to be on Savile Row because, for me, it’s the icing on the cake. When men become successful, one of the things they want is a Savile Row suit,” said Hackett from his new top-floor office, which is filled with understated furniture, pillows that feature his two beloved Sussex spaniels and an array of books on style.

Hackett always had a flair for bespoke tailoring and is now ready to push that part of his business in a bigger way. “Right from the beginning we’ve offered bespoke, but it’s never been the main thrust for the business. This opening is giving us the opportunity to say we’re here, we’re on Savile Row, we can compete with the rest of the guys,” said Hackett, who was dressed in a striking check bespoke suit — created as part of a collaboration a few years ago with Prince Charles — and a polka dot bow tie.

The company, which is majority-owned by Spain’s Pepe Jeans Group, has also hired a new head cutter who will oversee a dedicated team of craftsmen located on Savile Row. He is looking to offer a quintessentially English look, but a little more relaxed in order to cater to a growing young clientele.

“Most tailors have their own house cut, sometimes it’s quite rigid, and then you have others who make a softer look. That’s really where we’re going to fit in, with a tailored, but more relaxed, shape. It all still depends on the customer, but our intention is to offer a very English look that will still have some of the benefits of the way Italians put a suit together, just a bit softer, a bit more relaxed,” he added.

Doing bespoke also makes business sense according to Hackett, who made clear during the interview that “this is not a vanity project” and there’s an opportunity to cater to a younger clientele that is now becoming more interested in tailoring.

“There’s been an increased interest in tailor-made clothes. I think that might be generational, because young guys don’t want to look like their dads who are walking around in hoodies and tracksuit bottoms,” said Hackett, whose brand also has a store on nearby Regent Street.

“They’ve never experienced proper tailored clothes, so for them it’s something really new, and that’s what we’re building on. A lot of our customers are between the ages of 25 and 35 and have just become successful in their careers. In fact, I used to sell a lot of secondhand suits to students, because they would much rather come buy a good secondhand suit than go to a department store and buy a cheap ready-made one. They graduate to buying new suits off me, then to having suits made and then going to the next level and having bespoke suits. These are customers who have been with me for 30-odd years.”

Hackett has been encouraging this level of loyalty in his clientele by also making sure he’s keeping them entertained, through his 65B Members Club. The new store will have a dedicated club room, hidden at the back and decorated with lush velvet fabrics and animal-print wallpapers, where events such as cigar evenings and talks on photography, fine wines and Aston Martin will be held.

Elsewhere in the store there are spacious rooms selling the ready-to-wear collections. Those rooms highlight the building’s original features with exposed wood floors and minimalist furniture.

The opening of the store will mark a number of launches, too, including a new cologne created in collaboration with D.R. Harris, and a selection of vintage gentleman’s accessories that has allowed Hackett to go back to his roots of selling secondhand items.

“It’s another reason to pop in and see what’s new. It’s the idea of the thrill of the chase. You never know what you’re going to find — and people like that,” added Hackett.