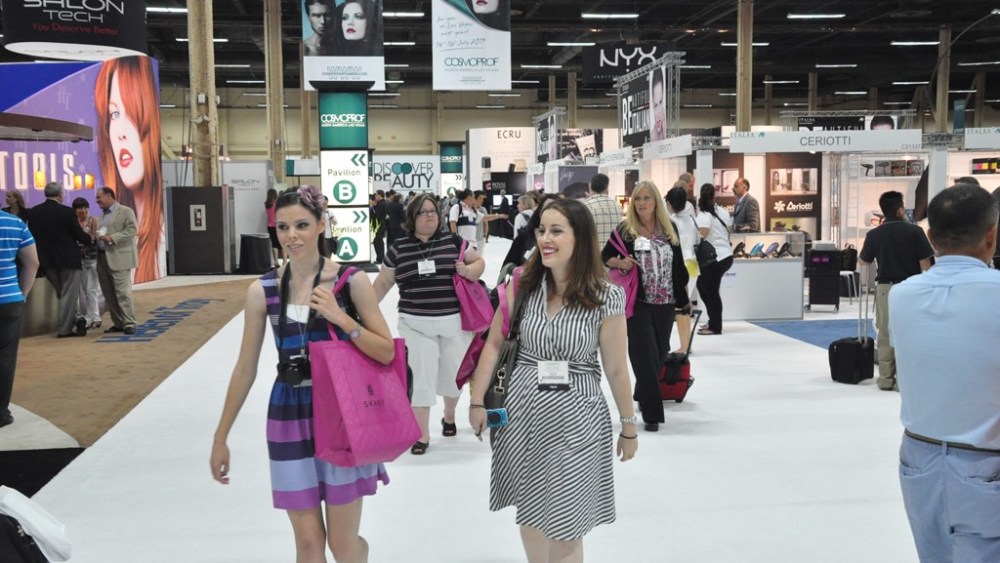 LAS VEGAS — Hair and nail battles raged on at Cosmoprof North America, where brands angled to get a leg up with the latest releases to stoke the nail art, gel polish and keratin smoothing treatment crazes.

Nearly 860 companies and 25,000 importers, distributors, manufacturers, spa and salon owners — and retail buyers, up 9 percent from last year — came to the trade show, which held its 10th edition at the Mandalay Bay Convention Center here from July 22 to 24. The increased attendance reflected an upbeat, yet cautious, outlook for the U.S. beauty industry despite a forecast by the Demeter Group that its revenues would dip slightly this year to $59.8 billion from $59.9 billion last year.

The spa and salon trends fueling sales haven’t been without controversy, none bigger than the one surrounding formaldehyde gas emitted when stylists are performing Brazilian Blowout treatments or similar services. The fallout from the controversy was apparent at Cosmoprof as brands offering the services peddled alternatives to formulas containing formaldehyde or asserted their commitment to governmental regulations.

Keratin Complex, for instance, put up signs around Cosmoprof touting its compliance with standards set by the federal Occupational Safety and Health Administration. OSHA stipulates that products that have .1 percent or more formaldehyde must include notices revealing that they have formaldehyde, the names of the parties responsible for the products, and hazard information.

Among the companies presenting alternatives to traditional keratin treatments was Ván Tibolli Beauty, marketer of GKhair. It’s Tibolli line premiered abroad last year (European countries have tighter on formaldehyde content than the U.S.) before being introduced domestically this year and is based around Trioxxy, proteins intended to enhance the texture of hair. A Tibolli Trioxxy treatment is estimated to cost $250 to $450 at salons.

Unlike the original keratin services, Colleen Martorano, director of education and marketing at Ván Tibolli Beauty, said that, with a Tibolli treatment, “You can shampoo, and style your hair the same day. It doesn’t hold you up.” GKhair, driven by traditional keratin treatments, still constitutes 55 percent of Ván Tibolli Beauty’s U.S. sales. Martorano noted the company’s total sales grew 300 percent over 2008, 2009 and 2010, although they have slowed down to a more moderate double-digit pace last year.

David Mulhollen Jr., president and co-founder of Keratherapy, which sells products with and without formaldehyde, said the influx of non-formaldehyde options isn’t indicative of U.S. customer demand, but rather companies pushing into certain international markets with tough formaldehyde policies. In the U.S., he said customers have returned to treatments with formaldehyde to get striking, lasting results that don’t hamper hair dye as some formaldehyde-free treatments do. (He stressed Keratherapy’s formaldehyde-free products can be used after color applications because they don’t strip hair color.)

“If salons have the ability to choose both, 80 percent will be from formaldehyde and 20 percent will be from non-formaldehyde,” said Mulhollen, who mentioned Keratherapy’s bestselling product, the leave-in Color Lock & Smooth Keratin Treatment Spray, has formaldehyde. “Now, Oprah is not talking about it. Dr. Oz is not talking about it. It has really calmed down in the press.” However, he added, “Hopefully, there will be a new preservative that will replace formaldehyde. A lot of people are working on it.”

In nails, a lot of people are working to respond to the ongoing desire for manicures above and beyond the routine. In its fall collection, NCLA spotlighted a slate gray shade called Rock Solid accented with silver metallic sparkles. OPI created an 18-karat gold leaf top coat inspired by James Bond, and Orly previewed a top coat that changes the color of nail shades. This month, Orly is also launching SmartGels, an at-home gel manicure system encompassing a starter kit for $59.50, an Orly LED lamp for $59.50 and 12 lacquers for $9.95 each.

Nails took center stage at Discover Beauty, an area dedicated to emerging beauty brands. Italian brand Layla Cosmetics, winner of the Discover Beauty award feting its innovation, packaging and ability to succeed, attracted audiences checking out its Hologram, Magneffect and texturized matte Softtouch polish varieties. Acquarella added an entirely different element to the nail line-up at Discover Beauty with its water-based nail polishes. “The buyers for department stores were like, ‘This is something we could totally sell in our store.’ It is going to work as an alternative to whatever it is that they are selling. We are not trying to go after the same market share as an OPI,” said brand spokeswoman Polly Deason.

At past editions of Cosmoprof, oils were the talk of the hair segment, but, this time, they were all the rage at skin care brands such as Marula The Leakey Collection and Niki Saint Pierre. Letitia Wells, director of buying for YouBeauty.com and its two-month-old e-commerce Web site BeautySage.com, which partnered with Discover Beauty on a pop-up store featuring three brands, including Marula The Leakey Collection, said, “People, once they try it, they realize the benefits of it. There is that fear that if you have oily skin facial oil will make it oilier, but that is definitely not the case. Argan oil is one of the bestsellers on our site.”

Elena Severin, store manager and buyer for NewBeauty at Fred Segal in Santa Monica, Calif., attended Cosmoprof for the first time and detected a surge in doctor-fronted skin care brands, most notably Goldfaden MD and Hevia Skin Science. NewBeauty at Fred Segal’s customers “tend to be savvy not just with skin care, but with procedures, so having a doctor in the field knowing what works and doesn’t work firsthand rather than having someone create something out of their basement lends credibility,” she said.

Goldfaden MD has completely redone its packaging over the past year to emphasize both its natural positioning and its medical heritage. The line has been streamlined from 26 stockkeeping units to seven before an expansion to 12 by the end of next year priced from $32 to $115. “We really wanted to make a statement in the marketplace. Right now, consumers are extremely overwhelmed with what they see on shelves. Our goal is really bringing the key, basic solutions to the marketplace,” said Lauren Wolk, Goldfaden MD’s vice president of sales.

Overall, Severin was pleased by the focus of several brands at Cosmoprof on a tight selection of one to five key products. “It is not as daunting for me as a buyer or for our customers to try things out,” said Severin, who singled out BioElixia’s BodyShaper Cellulite Contour Crème as an example. “Fred Segal customers are looking for that new, cutting-edge line, and it doesn’t have to be a huge 10- to 20-sku line as opposed to one great, hidden gem.”