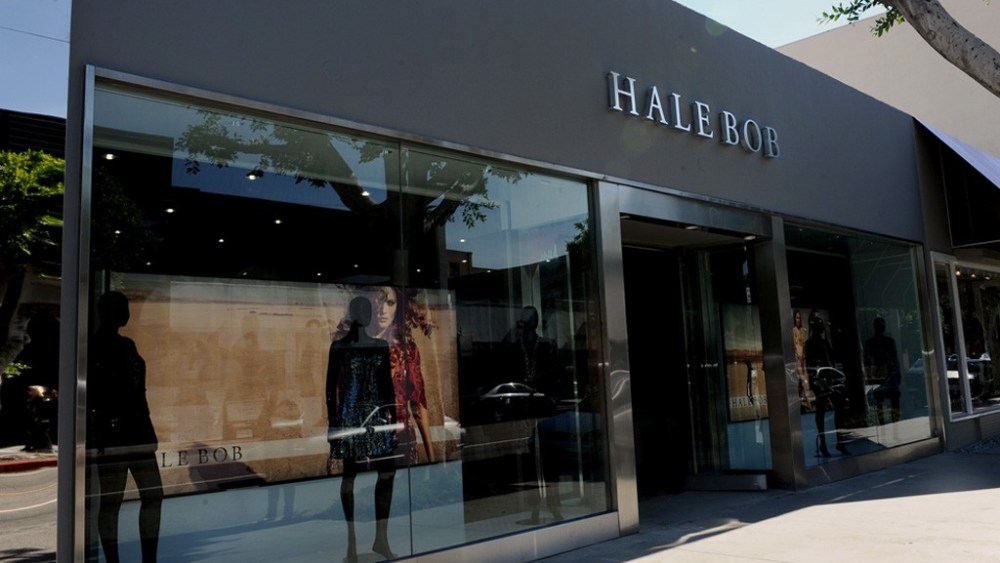 LOS ANGELES — After nearly a decade in business, Hale Bob has entered retail.

The Los Angeles-based contemporary brand known for its embellished and print-driven tops and dresses opened its first store on Robertson Boulevard late last month. The 2,800-square-foot store, which shares a block with Seven For All Mankind, Tory Burch, Anya Hindmarch and Alice + Olivia, among other recognizable retail tenants, is intended to raise Hale Bob’s profile just as the brand endeavors to increase its reach with licensed merchandise and franchised locations.

“Why didn’t I go earlier? I was not ready to go to retail. I prefer to take time to analyze and have a bigger collection,” said Hale Bob owner and founder Daniel Bohbot when asked about the decision to start retailing now. “Sometimes you have to get to the point where you feel comfortable about it. It is true I had a lot of opportunities to open five years ago or three years ago. Now, I feel that it is the right time for Hale Bob. We have a vibrant, growing business right now.”

Hale Bob executive vice president Corinne Ionescu described the store as a vehicle for exposure to “potential licensees and potential franchisees in the U.S. and abroad.”

“Everybody comes to Robertson to see what the trends are. It is also an opportunity for specialty stores to see the product in its best showcase,” she said.

Designed by Philippe Puron, who has worked mostly on residences, Bohbot likened the store to a metropolitan loft. Modern with black and white walls, and concrete flooring, the store has ample open space broken up by a seating area and mannequins. The majority of the merchandise lines the sides of the store, and photos from the fall campaign on the walls are the most dominant decorative elements.

Hale Bob has expanded from its namesake core line, Hale Bob, which is priced from $100 to $250 for tops and $200 to $400 for dresses, to Hale Bob Cabana in 2009 and Hale Bob Vintage last spring. The Cabana line will enter the store in January with swimwear, tunics, wraps and cover-ups ranging from roughly $100 to $200. The Vintage line specializes in body-conscious, feminine dresses with an average retail price of $160.

Currently, dresses and tops each constitute about 40 percent of Hale Bob’s sales, with the rest divided between sweaters, coats and a smattering of accessories. Going forward, Bohbot said Hale Bob would spread into different categories with licensing deals and shoes, bags, eyewear and jewelry as possible category extensions. “It is a logical next stop especially when we have a store in Los Angeles that allows us to test new categories and licenses,” he said.

Hale Bob has around 1,000 wholesale accounts in the U.S., including Bloomingdales, Macy’s, M. Fredric and Boulmiche, and 1,000 abroad, including Harrods, Harvey Nichols and El Corte Inglés, according to Bohbot. For the last three years, he said Hale Bob’s sales have climbed between 15 and 20 percent a year, and around 50 percent of the company’s sales are done in some 15 countries outside the U.S., where the focus will be on identifying franchised retail locations.

Bohbot wouldn’t project sales for Hale Bob’s Robertson store, but industry sources estimate it could generate $2.8 million at retail in its first year. Speaking of future stores, Hale Bob licensing agent Michelle Hansel said, “We don’t have a plan in terms of a number. We want to see how this does and then potentially we could have a few flagships in the U.S. and go abroad.”

She singled out New York, Miami and Las Vegas as possible destinations for Hale Bob flagships.