By Samantha Conti and Tsukasa Furukawa on July 11, 2006
View Slideshow 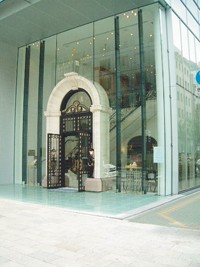 LONDON — Harry Winston is expanding in Europe and Asia — the jeweler’s first London store opened last week and plans were set for the firm’s largest worldwide unit in Osaka, Japan — as part of a strategy to more than triple the number of stores in the next decade.

“The diamond World Cup starts here,” chairman Ronald Winston said during the store opening on July 4. “There’s going to be a lot of competition. In fact, I can feel the 12-gauge shotguns loaded and pointed in our direction.”

Winston said he expected the London store to attract the company’s international client base, especially customers from Russia, Saudi Arabia and India. “We have a long history of selling in India and there’s a huge middle class there now,” he said.

Winston was sitting on a dark velvet chair in a private sales room at the 5,500-square-foot flagship that spans five floors. Thierry Despont, who designed the Harry Winston units in Beverly Hills, Tokyo and Osaka, came up with the store’s concept.

There is a cream and brown color scheme, plush suede sofas, silk velvet walls and a crystal chandelier in the atrium. The jewelry twinkles from black lacquer display cabinets with gold detailing. The bronze front door mirrors the exterior of the Beverly Hills unit.

Over a glass of fresh orange juice, and with a Frank Sinatra soundtrack playing quietly in the background, Winston said he felt at home in London.

“We’ve actually been selling here for the past 20 years, although there was no store,” he said. “And I love London — I used to come with my late father to look at rough diamonds from De Beers.”

“It does feel like we’ve always been here, because we have such an international clientele,” O’Neill said. “But we certainly weren’t going to come to London until we had it right. Londoners can be very unforgiving.”

The store is stocking everything from its $3,000 entry-price-point drop hoop earrings to a pair of 60-carat, D-flawless diamond drop earrings for 5.83 million pounds, or $10.7 million at current exchange.

In a nod to its new store, the company also has created the special-edition Westminster Tourbillon watch, with cathedral gongs for four notes in the tune of the church’s chime. The watch, with its alligator band and emerald-cut buckle, is priced at 200,000 pounds, or $368,000. Eight watches have been made.

O’Neill said Despont’s aim was to create “a residential feel” in a place where business is transacted.

“It’s our conception of what luxury should be,” said O’Neill, adding that he does not consider Harry Winston to be a brand, but rather an American design house.

The London unit is Harry Winston’s 12th store worldwide, and O’Neill said he’s focused on a deliberate, steady retail rollout over the next decade.

“Our ambition is to have 40 to 45 stores, but we’re in no hurry, and we’re not settling for anything less than the right location,” he said. “Harry Winston has always been about ‘less is more.'”

A key focus of the expansion is Japan, where Harry Winston announced it will open a fourth unit next spring in Osaka’s central shopping district of Shinsaibashi.

The boutique, with an estimated floor space of 6,420 square feet, will form Harry Winston’s largest freestanding establishment worldwide, said executives at subsidiary Harry Winston Japan. It will help to expand business in western Japan, focusing on Osaka and its neighboring cities of Kyoto and Kobe.

Harry Winston opened a third boutique in Japan in February on the first floor of Omotesando Hills, a new shopping complex in the heart of Tokyo that stands along the fashionable Omotesando Boulevard, often referred to as the Champs-Elysées of Tokyo.

The company is entering the Osaka market after testing it since 1998 with a salon on the first floor of Osaka’s Rihga Royal Hotel. The salon will stay open.

Harry Winston started doing business in Japan 1988, when it established its original salon at the Hotel Seiyo Ginza. That location was closed in 2000 and moved to a more prestigious address in Ginza, near the famed Ginza 4-chome crossing, where a two-story salon was opened.

Harry Winston Japan said it does not give out sales figures or other details of its operations.