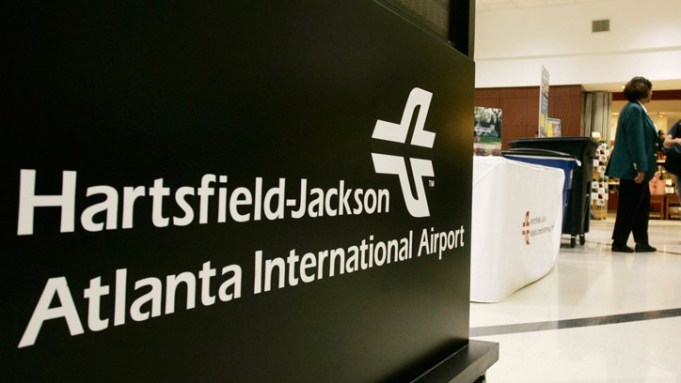 ATLANTA — The world’s busiest airport, Hartsfield-Jackson Atlanta International, is overhauling its retail space with about 80 new tenants in renovated shops focused on luxury fashion and accessories.

The project, which is to be completed by next June, will bring in brands such as Bulgari, Salvatore Ferragamo, Brooks Brothers and Zegna.

Officials said the airport’s stores generated annual sales of $90 million in 2007, and forecast $125 million when all units are back in operation. With 89 million passengers last year, compared with 84.8 million in 2006, the airport’s 110 retail spaces — not counting food and beverage locations — were last updated in 1995 for the Summer Olympic Games here in 1996.

Airport retail can be a lucrative alternative to traditional locations, especially during the current economic turmoil. Specialty store sales for nonanchor mall tenants dropped 4.7 percent in 2007 to an average of $393 a square foot, according to the International Council of Shopping Centers. By contrast, sales in airport stores range from $1,000 to $2,000 a square foot, said Pauline Ambrust, president and chief executive officer of Airport Revenue News, a Palm Beach Gardens, Fla.-based trade publication.

Airport retailers are not immune to the macroeconomic issues facing stores in traditional locations and are also subject to the struggles of the airline industry. However, airport stores, usually units of less than 700 square feet, have shown increases each of the past five years, Ambrust said.

John Cugasi, director of concessions for Hartsfield-Jackson, said airport retail has evolved, attracting more high-end fashion and beauty merchants. Women are 50 percent of the target market in what had been a male-focused tenant mix a decade ago. Local, domestic and international retailers are seeking to capitalize on the airport’s position as a regional hub and its increasing global profile.

“After the basics [news and gifts], we’re focusing on more needs-based retail, such as technology, apparel, jewelry, accessories and personal care,” he said.

For every retailer, exposure to the huge passenger volume is the primary motivator. Traffic, especially international passengers, is forecast to increase dramatically when the Maynard Jackson International Terminal, a 1.2-million-square-foot, $1 billion facility that will add 12 international and 16 domestic gates, opens in 2011.

The airport’s retail sales, excluding food and beverage, have grown 10 percent annually since 2001, but 2008 is expected to be flat because of closings during construction.

Three big airport retail operators — HMS Host, Paradies and Areas USA — won bids from the City of Atlanta, which owns and runs Hartsfield-Jackson. Each company, in partnerships with retailers, will open 13 to 30 stores in the main terminal and four concourses — A through D.

“Atlanta will set a new benchmark with international brands,” she said.

Bulgari will open its second non-duty free location in Atlanta after a similar store in John F. Kennedy International Airport’s Terminal 8 opens this fall. The offerings will include Bulgari’s signature jewelry and watch collections, emerging accessories designs, silk, such as ties, and small gift items.

Atlanta-based Paradies will open 13 stores such as Brooks Bros., Lacoste and Brighton Collectibles. Women’s product has grown as much as 30 percent at some retailers, said Bruce Feuer, vice president of business development for Paradies.

Paradies charts traffic and assigns staff based on peak times of day and seasonal changes. Despite the advantage of having a captive audience of affluent customers, they may be time-strapped or stressed. Paradies’ sales training programs teach behavioral skills, and offer full benefits for 20-plus hour a week salespeople to keep turnover low.

Atlanta will be the first U.S. airport venture for Areas USA. The Barcelona-based company has 450 stores in nine European and South American countries, including airport, hotel and casino venues, for total sales of $1.2 billion worldwide.

Tim Kinder, director of merchandise for Areas USA, said airports present the challenge of limited night hours for construction and merchandising product, and security restrictions on employees and deliverers.

Retailers such as Vera Bradley and Mori Luggage & Gifts see the airport stores as brand builders that extend regional or national awareness to international customers.

Atlanta-based Mori Luggage is opening its first airport location to attract consumers from beyond the five Southeastern states where its 29 company-owned stores are located. The 320-square-foot unit will offer product edited for more high-volume travel accessories and fewer gifts and decorative accessories than carried in corporate stores.

Atlanta is a top wholesale and retail market for Vera Bradley, a Fort Wayne, Ind., accessories line known for its quilted cotton bags that have a big following in the Southeast and Midwest. The label’s 330-square-foot Atlanta airport space opens early next year, following a similar location in Indianapolis International Airport in November. The stores are part of a retail rollout that included 21 Vera Bradley corporate stores in 17 states that opened in 2008.

“Atlanta is a top market for us, and brand awareness is high there,” said Monica Edwards, director of brand communications. The company will also open a store in Atlanta’s Phipps Plaza, a Simon Properties luxury mall, in November.

Brooks Bros. launched its first airport store in 1998 and now has 22 airport locations. Starting solely with men’s product, women’s apparel, added in 2003, is in 14 stores and growing. The Atlanta location, opening in January, is one of four airport locations opening this year, with 10 to 15 planned in 2009 in the U.S. and Canada.

Lacoste will open a 750-square-foot Hartsfield-Jackson store. It has others at Newark and Kennedy airports.

“It’s a partnership in the true sense,” said Robert Siegel, chairman and chief executive officer of Lacoste USA, who compared the concept to an in-store shop in a department store. “We sell merchandise wholesale to them, make sure the stores look like our other locations and they operate and staff it.”

Beyond apparel and accessories, Atlanta officials say stores will offer plenty of retail to promote Atlanta and the South. Along with the Georgia Aquarium store and Savannah’s Candy Kitchen, the Panda Veranda has a live “Panda Cam” feed directly from Zoo Atlanta of the four pandas there including a cub born Labor Day weekend.