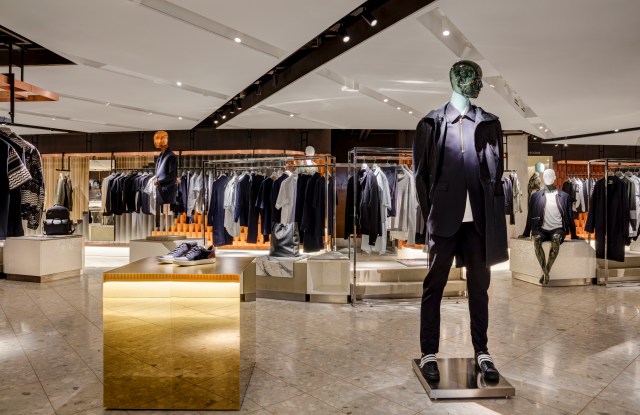 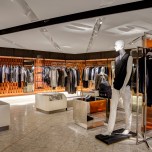 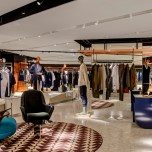 LONDON — In a bid to capture the attention of time-poor, cash-rich and digitally dependent customers, Harvey Nichols is upping its men’s wear play with a refurbished department designed and merchandised with efficiency — and indulgence — in mind.

The 28,000-square-foot space opens today and spans two lower ground floors. The new department was designed by Virgile + Partners, which has worked before with Harvey Nichols as well as with retailers such as Burberry, John Lewis, Harrods and Space NK.

Men’s wear is phase one in the Knightsbridge store’s long-awaited refurbishment plan, a four-year project spearheaded by Stacey Cartwright, who took over as chief executive officer in 2014. Cartwright was formerly chief financial officer and executive vice president at Burberry Group.

The men’s floors have been organized with convenience in mind and for lightning-quick browsing that mimics an online experience.

The denim area is arranged by product type rather than by brand, with white T-shirts hanging together on one rail, leather jackets on another and chinos of various styles and price points also grouped together.

Downstairs in the tailoring room, day suits all hang together, as do formal suits and tuxedos. A nearby shirt showcases myriad models in separate nooks so that customers can eyeball collar, cuff and color varieties.

The store’s Style Concierge has its own vast dressing room space — with sofas, flat screen TVs, mobile device chargers and PlayStations — and shopping services that are free of charge, with no minimum spend. Sales assistants are armed with tablet tills so that customers can make purchases anywhere. There is seating in every area for weary shopping partners.

“We want to take the grunge out of shopping — and leave all the fun bits. It’s about entertainment and indulgence — with added value and service. And we’ve been very thoughtful about how guys want to shop,” said Cartwright, adding that Harvey Nichols thinks of itself as a “large boutique rather than a department store.”

During a walk-through, she declined to reveal the money spent on the new space, although she called it “significant,” with “many millions” invested.

On the first lower ground level, the international designer, contemporary and denim areas have been built around a central footwear and accessories space.

The international area has discreet branding, no discernible shops-in-shop, and strong design features, including walls done in a variety of textures. One is covered with a repeating pattern of recessed wooden eggcups, while others are clad in brick, copper, and wood.

Striking-looking mannequins were handmade in Spain in materials such as copper, leather, velvet or brushed metal. They are posed among mid-century modern furniture dotted around the area.

Cartwright calls the new design the “Harvey Nichols envelope.” It’s part of a growing trend for London retailers to put their individual stamp on spaces, rather than showcase a collection of heavily branded shops-in-shop.

Next month, Project 109 will also open on the floor. A concept space, it will house installations, pop-ups, and a gift and technology area. Nearby there will be a barber, café and bar — open from early morning until late at night — and the area will have its own entrance on the corner of Knightsbridge and Seville Street.

New escalators have been built to access the second basement level. They have replaced a daunting set of stairs that would regularly deter customers from exploring that part of the store, “a rabbit warren of underutilized spaces,” according to Cartwright.

The second lower ground floor now houses the off-duty collections, tailoring and the Style Concierge service. There is also a selection of accessories including pens, lighters, wallets and luggage.

The space features design quirks such as taxidermy birds in shiny glass cases, and toy soldiers, trains and plastic water guns on display alongside swimming trunks and Sunspel shirts.

Matthew Miller, Casely-Hayford, Peir Wu, Tiger of Sweden, Soulland and Grenson are among the brands that are doing exclusive capsule collections to mark the unveiling.

Shadi Halliwell, the store’s group marketing and creative director, called the refurbished area “a one-stop shop,” adding the launch would be supported by a major ad campaign to break in May, around the time Project 109 opens.

She said the care the store has given to the new space speaks to the fact that men’s wear is growing faster than women’s wear.

According to Euromonitor, global men’s wear sales grew 4.5 percent in 2014, while women’s wear grew 3.7 percent. Sales in the men’s wear apparel market are set to reach $480 billion by 2019.

According to Mintel, sales of men’s clothing have risen 22 percent in the last five years, with the segment growing faster than women’s wear.

Harvey Nichols’ ground floor is the next area to undergo a facelift, and phase one of that project will be unveiled in July. The floor is set to be completed by the end of October.