The Landmark luxury shopping mall has gotten a bit funkier with the opening of Hong Kong's first Harvey Nichols.

By Vicki Rothrock and Fionnuala McHugh on October 4, 2005
View Slideshow 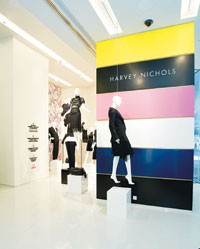 The British retailer opened its doors here last month after more than a year of renovations. The five-floor shop occupies what was a combination of retail and office space. The store is 60,000 square feet across five floors, with the upper two being larger.

The total investment was around 100 million Hong Kong dollars, or $12.8 million at current exchange, said Brenda Wang, chief operating officer of Harvey Nichols in Hong Kong. She declined to anticipate first-year sales for the new store.

Hong Kong’s Harvey Nichols is the eighth unit worldwide for the group. Other stores are located in London, Manchester, Edinburgh, Birmingham, Leeds, Dublin and Riyadh, Saudi Arabia. There are plans to open in Dubai in December and in Istanbul in September 2006.

Wang has been in Hong Kong for 12 years and witnessed the ups and downs of the territory’s retail scene. Before, “a look was transported off the catwalk and on the person,” she said. Now, it’s more experimental and more sophisticated.

There’s also the added dimension of catering to an increasing number of tourists from Mainland China who come to Hong Kong ready to shop because the sales taxes are lower. It becomes a balance for the retail sector to cater to this new emerging consumer base as well as the more sophisticated Hong Kong shopper.

The affluent Mainland Chinese “want brands,” Wang said, adding that Harvey Nichols allows them to experiment and see brands that aren’t offered anywhere else in Hong Kong, such as Kris Van Assche.

She is quick to clarify how she sees the new shop: “We’re not a department store,” she said. “We are a fashion specialty store.” In addition to fashion, the store also focuses on beauty products.

“We’re very focused on creating our own points of view,” said Wang, adding the market can take more brands, which makes Hong Kong a prime location for expanding. “Hong Kong wants choices,” she said, adding she doesn’t see Lane Crawford’s flagship at the IFC shopping mall as a competitor.

Landmark is a prime location that boasts nearly all the high-end luxury brands: Gucci, Fendi, Dior, Lanvin and Louis Vuitton among them.

“Landmark has always been that very iconic shopping area for luxury fashion and retail,” Wang said, adding that Dickson Concept Group has a solid relationship with Hongkong Land, which owns Landmark and many of the surrounding retail spaces. Harvey Nichols was bought by Hong Kong-based Dickson Concepts International in 1991 and has been privately owned by Dickson Poon, the company’s executive chairman, since 2003.

The Landmark location is also a consideration when it comes to products on offer. “Harvey Nichols has to offer a complementary product selection that enhances Landmark,” she said, adding its brand portfolio is constantly evolving.

Harvey Nichols isn’t the type to come into a new market shy. The store has injected playfulness and bright lights into Landmark, particularly with the display above the store’s ground floor entrance facing the atrium. A large Union Jack flag that is constructed with yellow flashing lights and a red and gold Asian-motif print are the background for three mannequins.

Marc Baumann, general manager and visual merchandising and display manager, said he was struck by the flashing lights and neon of Hong Kong. He wanted that essence to be part of the Hong Kong logo of the shop, he said.

“We wanted to bring the roots of Englishness and the vibrancy of Hong Kong into the design of the shop,” Wang said.

Head architect Christian Biecher, who also worked on the retailer’s Dublin store, “wanted to make sure we weren’t just a typical white box,” Wang said. “Fashion can be from art to pop culture and he tried to put all that together to make a statement about what Harvey Nichols is about.”

That British feel manifests itself in large, gold metal cut-out screens inspired by a vintage lace pattern at entrances of the store. There also are floral vintage wallpaper designs throughout.

Each floor has its own atmosphere with different music, lighting, color schemes and mannequin styles.

The ground floor is a walk through the land of luxury beauty. Among the eight brands showcased are Dior, Chanel and South Korea’s Sulwhasoo. The lighting is bright, with each brand getting either prominent counter space or an individual nook for privacy.

The first floor features the multibrand concept pioneered in the company’s flagship in London: Beyond Beauty. Offered are organic brands, vitamins, fragrance and lots of skin care. “In Asia, it’s more focused on skin care as opposed to makeup,” Wang said.

Brands include Organic Pharmacy and the men’s line Baxter of California.

Some brands, such as Versace and Dolce & Gabbana, have agreed to have Harvey Nichols as the only place in Hong Kong where their merchandise can be bought other than in their respective shops.

The third floor is designer women’s wear, shoes and personal shopping. The space has little cocoons off the main walkways, which give shoppers more privacy. Brands include J. Mendel and Carolina Herrera.

Maria Stratigakes, J. Mendel’s vice president for retail and merchandising, said of Harvey Nichols, “We have the same feelings and ideas about luxury. Most people think of us as furriers but we’re really a luxury brand and Harvey Nichols is a perfect fit for us.”

On the store’s fourth floor there are three sections for men’s wear: international designers geared toward a young crowd, which include New York’s Cloak and Marcel from Paris; tailoring with suits and shirts from Richard James and Kilgour, and contemporary with J. Lindeberg, Morphine Generation and Dark Shadow. There also is a denim wall with a Levi’s Vintage line, Blue Blood and Tag, as well as a corner for Diesel.

The fourth floor also is home to a contemporary collection for women, which measures about 8,000 square feet. Brands include Mint, Alannah Hill, Loy & Ford and Issa.

Between the men’s and women’s wear is a children’s section with designer brands such as Dolce & Gabbana, Prada, Paul Smith and Juicy.

Similar to other Harvey Nichols, the Hong Kong store has a restaurant on its top floor, dubbed Fourth Floor. The food is classic French cuisine cooked by a chef from Singapore. Unlike other restaurants that flaunt the celebrity of their cooks, Fourth Floor’s focus is on the food and space — not so much on who the chef is, Wang said.

The restaurant has a low ceiling with a geometric, primary-colored design, which is echoed on the floor. Lunch service begins at noon and the restaurant will stay open until the last customer leaves.

Much like the changing mood of each level, the restaurant has lights on the floor that change color to match the time of day. The music also shifts throughout the day in style and volume from more relaxed to more club-like in the evening.