Trish Wescoat Pound has built one of fashion’s more delightfully bipolar companies in Haute Hippie, which is both living the dream and looking for cash. 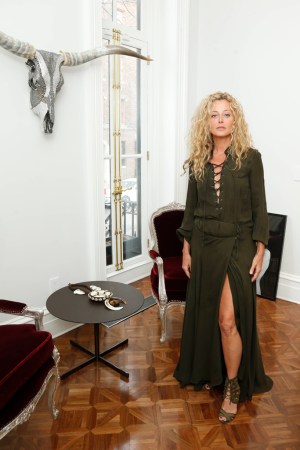 NEW YORK — Trish Wescoat Pound has built one of fashion’s more delightfully bipolar companies in Haute Hippie, which is both living the dream and looking for cash.

And maybe that was destined from the beginning, when Pound left her corporate gig at Liz Claiborne Inc., took her years of experience at Theory and launched the brand out of her apartment in 2008.

To start, she gave it a moniker that suggests contradiction, blending high refinement with a vagabond nature. It’s a mix that both operationally and stylistically has helped the company grow to $40 million in sales, with distribution online, at department stores such as Saks Fifth Avenue and Neiman Marcus and in four, soon to be five, of its own stores. Sales this year are expected to grow by 25 percent to 30 percent. That growth speaks to the brand’s capacity, but the cost of doing business at that scale doesn’t necessarily leave it with enough money to achieve its potential.

So the hunt is on for an investor. While an infusion of cash would help Haute Hippie better telegraph its brand identity to shoppers and build out stores and new categories such as accessories, it might also give Pound a moment to think.

“I want to really design more,” said Pound, who is creative director but who has worn many hats at the company, often at the same time, drawing on her experience in merchandising and production. “I don’t want to have to go from the left to the right side of my brain anymore,” she said. “It’s exhausting and at the end of the day, [it means] going home and having nothing for myself.”

Going home is a relative term for Pound, whose husband, Jesse Cole, stepped in as chief executive officer in 2012 to help organize operations and clean up after a number of employees went on spending sprees with corporate credit cards. That fraud cost the company $700,000 to $800,0000 and shaved 10 to 12 points off profit margins for two seasons.

To plug that hole in the company’s finances, Cole brought in TPG cofounder David Bonderman, who acquired about 10 percent of the business as a personal investment.

“Had we not been tampered with I never would have sold a piece to any one,” Cole said. “David turned out to be a great partner and we’re very, very happy to have him in the Haute Hippie family. We went through this murky time and operational capital was very important.”

But except for some lingering legal action, that incident is pretty much over. Five former employees pleaded guilty to felonies in the New York state case over the past month or so. The company has also sued the employees to get back the full amount that was stolen. “The D.A.’s office did the first part and convicted these bad actors and we’re going to finish it off,” said Haute Hippie’s attorney, Stuart Slotnick.

Cole is now out pounding the pavement for more money and is said to have found some interest and received at least one letter of intent.

“We’re looking to sell somewhere between 20 to 30 percent of the business,” Cole said. “It does sound arbitrary, but with David owning 10 percent of our business, we still want to remain in control.”

The pitch this is that Haute Hippie not only has its act together, but is positioned to be a much bigger company. Pound said a little bit of money would let the brand potentially double sales with more or less the same manpower.

“We’re still like that company that, we can do everything, but we need to do everything that we can better and we need to be more efficient and more effective and to have it packaged in a way so that it’s not throwing everything together at the last minute,” Pound said.

In addition to adding more categories, Pound said the company could have a lot more stores and build a bigger e-commerce business with a more aggressive social media strategy. “All these things are so super important,” she said.

But what Pound really wants to do is “speak to my customer in a bigger way.”

She spent months on the road last year, crisscrossing the U.S., doing personal appearances at stores and meeting customers.

After a hotel bill ran higher than expected, Pound got a call from what she described as “corporate,” but the person on the other end of the phone was Cole. “To be the husband and the ceo at the company, sometimes it’s a fine line,” he acknowledged.

Her response was to slum it for the rest of the road trip. But staying at the YMCA and running on fumes seemed to energize her, bring her closer to her hippie side. “I know that when I’m on the road and we’re driving and these funny things happen and we meet these interesting people and we laugh and we cry and we share stories, I know it’s special,” she said.

Such experiences are very much a part of Pound’s creative process, which is deeply textured, often drawing on history and playing off big themes, including death; the skull of a longhorn is a common reference point for the brand. Little of this journey, though, is apparent when a Haute Hippie dress is hanging on the rack or clicking by on a Web site.

“The world does not get to understand how much effort, how much history and research goes into everything Trish does,” Cole said.

And Pound added: “I just want to do justice to what has been created and I want to make sure I don’t fall short on communication, or reaching the consumer, or leaning in and inspiring. I want to do a good job and I want the brand to have a voice given to it. In some ways the brand has outgrown me. It’s outgrown my apartment. It deserves more.”