The new e-commerce site will offer more than 400,000 items from 4,000-plus brands through deals with more than 100 online retailers. 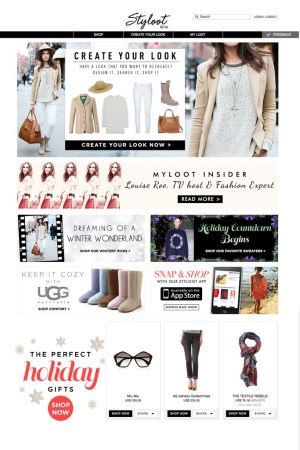 Featuring clothing, jewelry, accessories and footwear, Styloot offers more than 400,000 items from 4,000-plus brands through deals with more than 100 online retailers — ranging from Net-a-porter to Target, Bloomingdale’s to Banana Republic, and brands ranging from Christian Louboutin and Levi’s to Oscar de la Renta and BCBG Max Azria. The site’s search engine enables users to refine a search by brand, style, color, retailer, price point and type of sale (from 30 percent off to 70 percent off).

Styloot aims to set itself apart from other online retailers with similar search mechanisms with its “Create My Look” tool. The feature allows users to get even more specific by, for example, entering the type of toe, vamp, fastening and heel of a shoe, using a range of given descriptions and visual symbols that appear on a “mannequin” foot and leg as the user clicks on her specifications. For tops, users can similarly choose their neckline, sleeve, overall style and opening while seeing the silhouette change on the mannequin. For pants, they can specify the type of pockets, style, waist and so on.

Styloot also has a free app for mobile devices and tablets that allows users to take a photo of an item or an entire outfit that they may spy in a store or on the street, and receive a list of similar items, arranged by price point, within 24 hours. There are also the requisite inspiration boards that users can create and share on the site or via Facebook and Pinterest.

Each purchase is made on the retailer’s own site, with Styloot earning revenues through percentage points from each transaction.

“It’s exciting to see how online shopping has grown and changed since we started HauteLook,” said Espinosa of the site, where she served as vice president until it was sold to Nordstrom in 2011. “Back then, getting people to leave a credit card number wasn’t easy. Now women are supersophisticated in how they shop online, and they know what they want.”

In November 2011, Espinosa set out to create a new online shopping experience aimed at bigger, better and more, rather than only the flash sales that HauteLook helped popularize. She found investors and technical partners in Karthik Nandyal and Samir Patil, American-educated engineers and entrepreneurs who worked on Wall Street and are now based in Pune, India.

“Their technology was the only thing that I was seeing that had everything: the deepest inventory search, the visual recognition and technical innovations,” she said. The price of labor for college-educated employees is also significantly less in India.

While Los Angeles-based Espinosa focuses on the curation, look and flow of the site on the front end, making sure there are new items and trends added every day, her Pune-based partners create the back-end experience, including the search results for users’ ultraspecific requests and photos. “We have a team of grads from the Indian equivalent of FIT, who pore over the inventory to fill everyone’s search requests,” she said.

To build awareness for the nascent site, which went into beta mode last month, Espinosa is in talks to partner with a multimedia company that would generate traffic for site, while Styloot would bring prestige and credibility in the shopping community to said company. She also plans to add editorial and interactive content such as celebrity and real-life street-style images and celebrity photo feeds in partnership with a photo agency. The My Loot Insider feature already showcases Los Angeles stylemakers by presenting their shopping picks, a feature that will eventually expand to include fashionistas worldwide. On the product side, brand exclusives are a goal to make Styloot a discovery site for new talent and a destination for established designers wanting to get in on the action.

“Ultimately, I want this to be the first destination where women go to shop. It appeals to the savvy shoppers because there’s a range of price points and you can see everything in one place. You can also get ideas for what to buy, and shop the latest trends. The potential is really big,” she said.

While Espinosa declined to give financial projections, industry sources said a site like Styloot could net up to $5 million in commissions in 18 months.