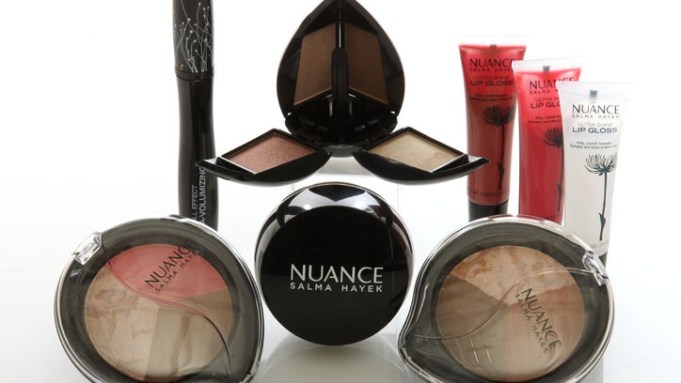 Salma Hayek couldn’t keep her hands off guests Thursday during a luncheon to unveil her 100-stockkeeping-unit Nuance Salma Hayek line that will bow in August exclusively in 7,000 CVS Pharmacy stores and online. In the sun-basked dining room of The Mondrian Hotel, Hayek dabbed her secret potions on CVS executives and beauty editors. “You have to try this,” said the petite Hayek as she held the hand of Lori Bloom, wife of CVS’ Mike Bloom, executive vice president, merchandising, supply chain, marketing and advertising. “It will get rid of my wrinkles,” smiled Lori Bloom.

To say that Hayek is passionate about her new beauty endeavor with CVS, would indeed be putting it mildly. The project, which she said has been on her mind for almost 10 years, in the works for six years and under development for the past three, had the actress literally in tears and on the edge of her cushioned chair. To the crowd, the Mexican beauty convincingly discussed how she sought to create a line to honor her grandmother’s beauty secrets, a cosmetologist who studied at Vichy Labs in Paris, and who also combined Native American and Mayan remedies into her potions. Ingredients used by her family, some not even known to top chemists, are cornerstones of the collection and range from familiar rosewater to the more obscure tepezcohuite.

“I took three years off my [acting] career to work on this,” she said in an exclusive interview with WWD. “This is not something that required 14 hours. Nooo, baby. This has been a full-time job.”

CVS executives couldn’t ask for a more honest and compelling spokeswoman and co-developer of the brand, which the company hopes will elevate the retailer above the rest of the mass market. “This is another first in our evolution of the beauty business,” proclaimed Bloom. “We’ve been committed to leadership in beauty.” According to industry experts, Nuance is the first drugstore, full-line assortment supported by a celebrity.

“It is important for us to be first,” said Cheryl Mahoney, vice president merchandise manager beauty care, personal care.

Nuance, Hayek divulged, “was not her first choice of brand name” but everything happens for a reason, as it aptly explains a point of difference of the line.

“Beauty is about subtle differences and the celebration of what you have,” said Hayek, who paused to apply Nuance lipstick in a shade called Playful, topped off with a gloss called Berry. The bit of color gave her a polished look, without detracting from her colorful printed YSL blouse and YSL black trousers.

While most are intrigued with the idea of a celebrity-backed line at mass, the burning question with Nuance is that Hayek is not most celebrities. With her status (she is an Oscar-nominated actress and Golden Globe winner) her connections (her husband is PPR chief executive officer François-Henri Pinault) and overall clout (she is a producer, director and philanthropist) why partner with a drug store chain?

On cue, Hayek delivered an answer most would expect. “It is possible to create extraordinary product for a low price. Everyone should have the right product at the right price. A lot of products don’t even cost a lot to make. I wanted to make simply the best product and give everyone access to the good stuff.”

But another reason emerged when Hayek playfully characterized herself as a bit controlling.

“When you deal with prestige suppliers there are only a couple that make the products for everyone. You are offered the cream that they didn’t already offer to Estée Lauder and [L’Oréal]. [For Nuance] I am dealing with many, many labs and suppliers who are hungry for the business and who didn’t mind some crazy Mexican coming to them over and over and over again asking them to change something.”

Hayek explained that by dealing and visiting the labs herself, armed with notes and ingredient lists and knowledge of how she wanted things blended, she was often misidentified as a chemist.

“And, I am not easy. And they have been very patient with me. You have to be really willing to put up with that. I mean, I am a double Virgo.”

While she even had to hear the word “no” along the way, especially when trying to get harder-to-find ingredients for her line which simply couldn’t be mass produced, she said “the world came together for the final formulations.” Hayek would not reveal how many labs in total have contributed to Nuance, but noted that Europe, the East and West Coasts of the U.S., Latin America and Africa have all contributed in some way.

Hayek, who said she has never had as much as an injection to preserve her 45-year-old, photogenic face, has relied simply on product her whole life, making her the ideal beauty junkie.

For years it has been speculated that Hayek was interested in developing a beauty line, namely a skin care range, and that’s how Nuance started, she said. But, quickly it grew into a full range of beauty products.

While many exclusives or celebrity launches zero in on one category — say fragrances or skin care — Hayek is hitting hair, skin, body and color. CVS maintains the idea was to come on board strong with all categories, rather than try to build one and then venture into another. However, each product will be merchandised within its proper category — color cosmetics will be at the entry of cosmetics, for example. “We are putting the products where the customer expects to find them,” said Mahoney said. The items are linked, however, by common colors on the packaging and the name.

An endcap in stores will contain the whole line, as well. “It will have a visible location,” said Mahoney. “For example it is the lead into beauty right at the front and skin care will be on the top shelf.” There is a commitment to service with beauty advisers in 800 doors who will be trained to sell all categories of Nuance.

Price points range from $7.99 to $19.99 for an antiaging supercream. It is estimated Nuance Salma Hayek will generate $35 million in first-year sales.

Ingredients that Hayek is most proud she brought to the table include prickly pear, which is in the body cleansing gel for moisture; mamey, which is in the volumizing hair sku to strengthen and thicken locks; and tepezcohuite, which is in the AM/PM Anti-Aging Super Cream, and is typically used on burn victims and has been 100 percent proven to generate red blood cells, she said.

There are also nontraditional beauty items in the line, such as a Correcting Spot Treatment 10% Sulfur Acne Treatment, which she said contains licorice to address the after effect of a blemish.

“It’s easy to address the pimple. That goes away in one day. It’s the red spot that drives you crazy.”

She is convinced, after all of her due diligence, that she has developed several items that rival the most expensive, technologically advanced products on the market, such as a base, which is included in the second launch of Nuance, one that has yet to have a rollout date.

“We cracked it. It is the best base that I have ever tried,” she said. “It covers everything yet you can still see through it. It is amazing.”

She called CVS “an important partner” who she said tested each of the products to make sure of their efficacy. Funded fully by CVS, Hayek said she had met with several retailers before deciding on the chain.

As for her other passions, such as acting, 2011 has been very busy for her.

In January and February, Hayek was busy filming a French movie, “Americano”; in February and March, she was filming a Spanish movie, that translated means, “The Spark of Life.” Beginning this month she is off to Boston to shoot “Here Comes the Boom” with actor-comedian, Kevin James.

As far as other beauty endeavors are concerned, she has not ruled out a fragrance deal, something she said that would be completely separate from Nuance and would likely be in the luxury market.