The retailer's reengineering capitalizes on real estate and reduces retail holdings to help shore up the balance sheet.

Richard Baker hopes to take Hudson’s Bay Co. private to save it — and is shrinking it as well.

Shares of HBC skyrocketed 42.4 percent Monday after its executive chairman, along with a group of other shareholders, proposed taking the company private at 9.45 Canadian dollars, or $7.13. The stock closed Monday up 2.70 to 9.07 Canadian dollars on the Toronto Stock Exchange.

The plan to take HBC private is conditioned on HBC’s deal to unload its German real estate and retail holdings. That deal, revealed Monday morning along with the bid to go private, involves selling the retailer’s remaining stake in its German real estate joint venture to partner Signa for 1.5 billion Canadian dollars, or 1 billion euros, and divesting its remaining stake in Kaufhof’s retail operations to Signa, which takes full ownership. In exchange, HBC will take full control of its stores in The Netherlands, where Signa has been a partner. 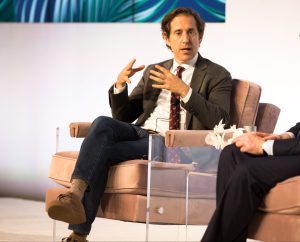 Baker and his like-minded group of shareholders have several motivations for taking HBC private.

For one, retailing is only getting more difficult and competitive, and going private would enable the company to plan better for the long term, without the distractions and short-term demands of the public markets.

Also, it’s an opportune time for an acquisition considering HBC’s stock price has been depressed, though the plan does offer a substantial premium to shareholders. HBC said the proposed transaction represents a 48 percent premium to the 6.37 Canadian dollar closing stock price on Friday, and a premium of 39 percent to its 20-day average closing price.

Baker has persistently spotlighted the value of HBC’s retail real estate holdings, specifically the Saks Fifth Avenue flagship in Manhattan and various other flagship properties in Canada and overseas, but that hasn’t helped the stock.

In 2014, he said an independent appraiser assessed the Saks Fifth Avenue flagship at $3.7 billion, more than the $2.9 billion HBC paid to purchase Saks’ entire business the year before, and Baker has formed joint ventures with real estate firms to further underscore the value of HBC’s real estate. Last February, HBC finalized the sale of the Lord & Taylor flagship on Fifth Avenue for $850 million to WeWork. All of L&T’s real estate and retail operations were purchased by HBC for $1.2 billion in 2006.

But Baker would believe that the market never fully understood the value of HBC’s real estate and never “baked” it into the share price.

Significantly, funds from going private and from selling its Germany holdings will help HBC shore up its balance sheet and will be used to improve the Saks Fifth Avenue and Hudson’s Bay operations. 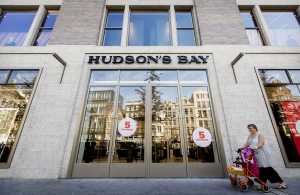 Some observers believe that Baker, originally a real estate developer, has become less enamored of the retail sector. At the WWD Retail and Apparel CEO Summit in October 2017, in discussing the Lord & Taylor flagship deal, he said, “Being a retailer, that is too tough. Man that is tough.…The second business we are in is the real estate business. That’s not as tough. It’s a place where we can make a lot of money.”

Baker’s now-shrinking retail empire began in 2006 with the purchase of L&T, followed by the acquisition of Hudson’s Bay, Saks Fifth Avenue, Gilt and Galerie Kaufhof in Germany. He’s long been interested in buying Neiman Marcus Group and has held discussions with that company that bore no fruit and seem to have dissipated.

Beyond going private and pulling out of Germany, HBC has other transactions on the agenda. The group’s stores in The Netherlands and its Lord & Taylor chain in the U.S. are both up for sale.

Last February, HBC revealed the closure of Home Outfitters in Canada and a “fleet review” of Saks Off 5th’s 133 stores including closing up to 20 Off 5th locations in the U.S. The fate of the Saks Off5th off-price division is questionable given its recent disappointing performance.

Foulkes characterized the agreement in Germany as “an exciting milestone for HBC as it will deliver important financial and strategic benefits. Financially, it provides us with the best opportunity to capitalize on our German real estate and allows us to further strengthen our balance sheet. Strategically, we will be able to fully focus our resources on HBC’s North American operations, including our best growth opportunities — Saks Fifth Avenue and Hudson’s Bay.”

The transaction, which means HBC completely exits its German retail and real estate operations, “is another bold action that unlocks the value of our real estate and demonstrates our resolve to creating a stronger, more capable HBC,” Foulkes said.

Some of the money from the German transaction will help strengthen HBC’s balance sheet by fully repaying its outstanding $436 million term loan, the company said. HBC pointed out that getting 1.5 billion Canadian dollars from the sale of the real estate in Germany topped the 1.44 billion Canadian dollar value from the joint venture deal orchestrated last year.

As part of the transaction, HBC assumes ownership of the Netherlands stores, and has retained a financial adviser to review options for that business, which has not performed to expectations, the company said. Cost-cuts in The Netherlands, including closing some stores, are expected. A spokeswoman said HBC operates “under 20” stores in the Netherlands.

Should HBC succeed in selling the Netherlands stores, it will mark its complete withdrawal from its ill-fated European expansion. Observers had questioned the viability of Baker’s move into Europe under the Hudson’s Bay banner, given the retailer’s lack of a profile in the region, as well as the complexity of operating a department store in overseas markets.

The German deal is expected to close in fall 2019, subject to regulatory approvals and other customary closing conditions. Signa has provided a 150 million Canadian dollar deposit.

Regarding going private, HBC’s board has formed a special committee of independent directors to review the proposal. The special committee is composed of David Leith, serving as chair, as well as Stephanie Coyles, Wayne Pommen, Earl Rotman and Matthew Rubel.

Baker, in a letter to Leith pitching the go-private plan, cited HBC’s need for “significant capital investment to execute its strategy” and “the high degree of uncertainty in the retail landscape.”

He cited several accomplishments over the past year, including simplifying the  corporate structure and strengthening the focus on the core Saks Fifth Avenue and Hudson’s Bay divisions.

He also cited divestitures of non-core assets including Home Outfitters in Canada, Gilt and Lord & Taylor, and real estate transactions that have “generated significant proceeds and allowed us to deleverage our balance sheet.”

“Yet despite the progress management has delivered to date,” Baker said, “the company’s outlook remains challenging with significant uncertainties and risks for shareholders. Further, as evidenced by HBC’s sustained depressed share price, the market has failed to appreciate the company’s progress and lacks confidence in its forward-looking outlook.”

The special committee has retained Blake, Cassels & Graydon LLP as legal counsel and J.P. Morgan Securities as financial adviser to assist in its review. A formal valuation by an additional independent valuator will be conducted.

HBC said the Baker-led group seeking to take the company private isn’t interested in selling its shares to another investor, nor its is interested in the retailer or any of its material assets being acquired by a third party.

It’s expected to take at least a few weeks for the special committee to conduct its review of the proposed privatization plan. The plan is conditioned on the closing of HBC’s deal in Germany with Signa, expected to occur in the fall. So HBC couldn’t go private before then. Proceeds from the Germany deal are part of the financing to go private.

Also required for the privatization to go through is the approval by “a majority of the minority” of shareholders who are not part of the group that made the proposal.

Baker’s move to take HBC private marks the second time in a little more than a year that a major department store retailer has sought to move out of the stock market. In March 2018, Nordstrom family members ceased their efforts to take Nordstrom Inc. private after its proposal was rejected by a special committee advising Nordstrom’s board. The family and the committee could not agree on a price.