HBC is pumping money into Kaufhof to roll out the "Dream Concept" across the chain and totally make over up to 10 flagships. 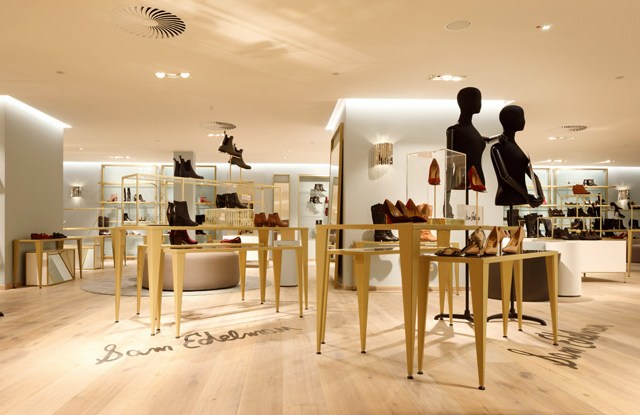 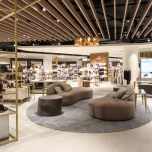 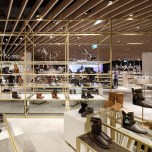 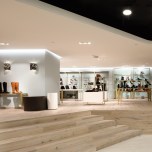 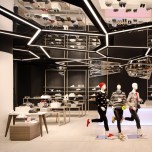 The store is the blueprint for recasting footwear, beauty and handbag presentations across the 100-unit chain, while up to 10 flagships in Berlin, Stuttgart, Frankfurt, Cologne and other key cities will receive top-to-bottom makeovers.

“This is our first remodeling under our new owner, the Hudson’s Bay Co. It’s really a great experience and challenge,” Olivier van den Bossche, chairman of the management board at Galeria Kaufhof GmbH, told WWD. “We can exchange thoughts and ideas on how to develop the business and learn from each other. It’s a good thing to be part of a department store group.”

HBC took over the Cologne-based Kaufhof Group in October 2015 in a $3.18 billion deal, marking the Canadian retailer’s entry into Europe. HBC also owns the Saks Fifth Avenue, Lord & Taylor and Hudson’s Bay department store chains, as well as Saks Off 5th, Gilt, Find @ Lord & Taylor and Home Outfitters, and the Galeria Inno and Sportarena stores in Belgium picked up through the Kaufhof deal.

The Dream Concept, in the 52,000-square-foot basement level of the Düsseldorf Kauhof, is “just the beginning of a journey,” van den Bossche said. “With the extension of our shoe, handbag and beauty product lines, the expansion of our services and new international fashion brands, this location has become a pioneer of the new department store generation at Galeria Kaufhof.”

Asked why the focus is on shoes, handbags and beauty, as opposed to other categories, van den Bossche replied, “We are strong believers in those categories. They are core businesses. My wife, who is 45 years old, always talks about shoes, handbags and cosmetics. We have to listen to our customers and women are our main target. In a lot of markets we can win in those departments.”

According to Jerry Storch, chief executive officer of Hudson’s Bay Co., the company is applying its playbook from Hudson’s Bay in Canada to Kaufhof in Germany. “Galeria Kaufhof is similar in assortment and content to Hudson’s Bay in Canada,” Storch said. “There are definitely concepts that can work in both countries, but we will work closely with our German team to make some tweaks. We will never force anything that doesn’t fit.”

He said the beauty component of the Dream Concept will be in every Kaufhof door, involving transforming the “quasi-self service” environments to full service, as well as bringing in brands not sold before at Kaufhof. “When we remodel stores, we bring in new brands. It supports the new brands.”

Asked about the condition of the Kaufhof stores, Storch said, “I think they are perfectly fine, but can be modernized and made more contemporary. They’re in better shape than the Hudson’s Bay stores when we bought that company.”

Among the changes, the footwear floor, which includes leggings, has been transformed to a high-service environment, where associates will be “heavily” involved in the selling process, from showing styles to accompanying shoppers to the checkout counter and carrying the shoes. Previously, footwear was a setting for self-service with shoes displayed in boxes like a mass merchant, rather than an upscale department store. There now will be about 30 employees helping customers, instead of eight in the past.

“To me, the floor is reminiscent of Saks Fifth Avenue in downtown Manhattan at Brookfield Place. It feels open, light, warm, different and very upscale,” said Sam Edelman, reached in Düsseldorf at the store. Edelman said he created several exclusive footwear styles for Kaufhof, using brocades in ballerina flats, black heeled booties and pumps, as well as sneakers with pom-poms in mauve, pale pink and gray.

He doesn’t see the German shopper responding differently to style than fashion customers in other cities around the world. “When you think about trend or fashion, either you got it or you don’t. When you are having a great season in New York, St. Louis or Boston, you are bound to have a great season in Paris, London or Düsseldorf,” he said.

Kaufhof marks Sam Edelman’s entry into the German market with “one of our closer American partners. It’s an opportunity to start a business at the ground level and really build in Germany, the Netherlands and Belgium.” He said Sam Edelman shoes will sell at the Hudson’s Bay store in Amsterdam — the first of the retailer’s stores to debut in Europe — expected to open in about six months, and currently sell at HBC’s Hudson Bay and Lord & Taylor divisions.

Next year, when the beauty department on the ground level of the Düsseldorf store gets overhauled, among the brands to be introduced will be Armani, MAC and various niche labels. About 30 percent of the beauty portfolio will be new to the store, according to Kaufhof executives.

Under the previous owner, Metro, “We were part of a very big group and not really the core business,” said van den Bossche. “It’s clear we have to catch up to become the department stores of the future. This is really a big step for us.”

Kaufhof was founded in 1879 in Stralsund, as a shop for textiles and buttons. Over the decades it grew into Germany’s premier department store chain, though much of it was destroyed during World War II. It rebounded in the Fifties and was purchased by Metro in 1996. For years, a merger of Kaufhof with Germany’s number-two department store chain, Karstadt, was explored by principles of both retailers, until HBC swooped in.

Van den Bossche said one could compare Kaufhof to Canada’s Hudson’s Bay department store chain back around 2006 or 2007. “It was a little bit tired and dusty.”

But the Hudson’s Bay chain has since been largely overhauled with renovations and remerchandising involving culling out weak brands and introducing more modern labels.

Even without the benefit of the Dream Concept, which should yield productivity gains as the years go by, “We are quite satisfied,” said van den Bossche. “Business in Western Europe is quite under pressure and we are outperforming the market, in all departments.”

With some premium brands added to the mix, there’s been a slight increase in the average price, according to Edo Beukema, general manager for merchandising and marketing at Galeria Kaufhof. “We don’t want to abandon our current customer. We will have a reach from entry prices to premium brands.”

In other developments, Kaufhof will open Topshop/Topman shops Nov. 17 at its Berlin flagship and subsequently roll out Topshop to all major stores. “It’s a door opener to bring in other brands,” Beukema noted.

Also, around the middle of next year, a Saks Off 5th will debut in Düsseldorf. It will be the first Saks Off 5th in Europe.

The Kaufhof flagship in Düsseldorf consists of two buildings: Königsallee, where the Dream Concept is housed, and the neighboring Carsch-Haus building on Heinrich-Heine-Platz.

To create the Dream Concept, the home, stationery, books and luggage departments were consolidated into Kaufhof Carsch-Haus, where the food department with its focus on confectioneries, spirits, wines and dry goods was also moved. Incorporated into the confectionery department are two Katjes fruit gum 3-D printers, which executives called the “Magic Candy Factory.”

“Single shoe presentations, personal consultations and support, high-quality furniture and lounges round off the new ‘Dream Concept,’” said Beukema
In Düsseldorf, lingerie has been included in the Dream Concept, and has new brands such as Heidi Klum Intimates, Aubade and Marie Jo, though lingerie is not the focus of the strategy.

By 2018, the other levels of the Galeria Kaufhof branch will be completely modernized. The next step is redoing the ground level, with its perfumery, handbags and jewelry areas. Among the introductions will be Armani cosmetics, MAC, Urban Decay and Bobbi Brown. It’s expected to reopen in mid-2017.