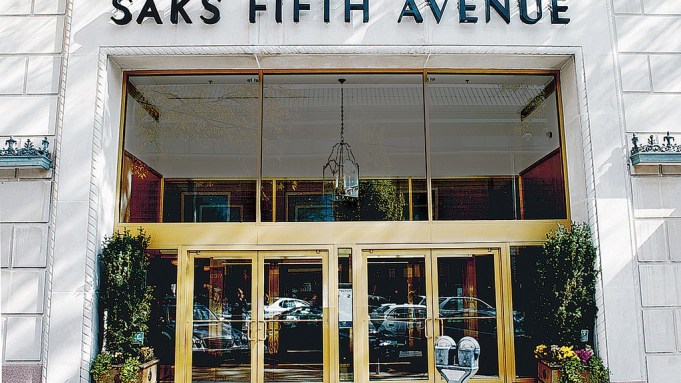 Saks’ bid, which was backed by private equity firm KKR, was ultimately rejected by Neiman’s owners as too low, opening the door for HBC to sweep in with an enriched offer to buy Saks. Although KKR is no longer working with Saks, it might still be eyeing Neiman’s, according to sources.

Saks’ sale process, including the surprising revelation that it pursued archrival Neiman’s, and the chronology of pivotal meetings with bankers, private equity players and retailers that eyed Saks, are detailed in a proxy statement released Tuesday. Goldman Sachs served as Saks’ banker during a complex and draining six-month sale process filled with twists and turns. The proxy, which Saks must send to shareholders so they can vote on the deal, seems to indicate that the retailer went through a healthy, yet grueling period where officials considered different avenues to maximize shareholder value. A date on the shareholder vote has not yet been set.

HBC’s first bid of $15.25 a share was rejected by Saks, but HBC came back with $16 a share, which was given the thumbs-up unanimously by the Saks board in late July — just a week after Neiman’s rejected Saks’ bid.

Among other revelations in the proxy:

• Bids that were rejected came in the $14 to $15 range, about a $2 to $3 premium over what Saks was trading for before the news broke that the company hired Goldman Sachs to advise the retailer on strategic alternatives.

• The sale process was triggered by an overture by a private equity firm — sources said it was Catterton — back in February, suggesting that Saks did not originally put itself up for sale. Catterton was said to have dropped out at one point only to renew the hunt later, as part of the revolving cast of potential bidders and investors, including Starwood Capital. Several other private equity companies, such as Sycamore Partners and Ares Management, also took a close look at Saks.

• Sadove and the Saks board believed a Saks-Neiman’s merger would work and would be a good alternative for shareholders.

In years past, other top executives from Saks and Neiman’s have also danced around the possibility of one retailer buying the other. For Richard Baker, the chairman and ceo of HBC, the agreement to buy Saks marked the end of a behind-the-scenes pursuit that ran several years, on and off, and was known internally as “Project Sally.” Baker is believed to have met with Sadove on different occasions to discuss the possibilities.

The latest Baker-Sadove exchange this year was the most serious effort to consummate a marriage and the first to be documented. A Saks-Neiman’s merger could still happen one day, but now it would be through Hudson’s Bay, which is expected to close its acquisition of Saks in two to five months, pending shareholder and regulatory approvals. A Saks-Neiman’s combination would be complicated, involving working out new merchandise matrices, rationalizing the real estate, blending the management teams and determining front- and back-office consolidations. It would also not go over well with designers and vendors due to the increased buying clout the combined entity would have, pushing wholesale prices down.

The filing also lists golden parachutes Saks executives would receive if they lose their jobs as a result of the change in ownership, as well as forecasts for Saks sales and profits well into the future. Saks is projected to eclipse $4 billion in sales in 2016, from $3.28 billion at the end of this year. Most of the gains are seen coming from Saks Off 5th outlets, e-commerce, and the Fifth Avenue flagship.

Aside from the three primary tacks that Saks considered — buying Neiman’s, or a sale to private equity or Hudson’s Bay — Holt Renfrew, Canada’s luxury chain, also expressed interest in Saks but apparently no serious offer materialized. Sources said Holt has also demonstrated interest in Neiman’s, which is mulling an initial public offering while considering an outright sale as an alternative.

According to the proxy, the sale process kicked off in February 2013 when Sadove received an unsolicited phone call from a private equity firm, identified as “sponsor A” and believed to be Catterton, expressing interest in buying Saks. Sadove met with the firm in March but no specific proposal emerged.

That development triggered meetings by Sadove and the Saks board to come up with alternatives for the future of Saks, such as selling the company or having Saks buy Neiman’s. It is believed that KKR was teaming with Saks to buy Neiman’s. The proxy does not identify any companies in the sale process other than Hudson’s Bay and Saks.

Around the same time, Baker called Sadove. The call is believed to have been coincidental to the overture by Catterton.

In April, Saks moved forward on its plan to buy Neiman’s, meeting with KKR and another private equity firm to get the financial support. The company also began entering into confidentiality agreements with prospective buyers.

In June, Saks made a nonbinding bid to acquire Neiman’s. Holt came into the picture in June, expressing interest in partnering with private equity to buy Saks. In July, Goldman Sachs requested offers from HBC and private equity firms, and Saks and Neiman’s couldn’t come to terms on price and other issues, so those talks ended. Saks and Hudson’s Bay finalized their merger agreement on July 28.

The agreement calls for a 40-day “go-shop” period permitting Saks to pursue other possible bids. The period expires on Sept. 6, and as of Tuesday, no competing bids have emerged. Sources said the deal is still on track.

In approving the deal, the board decided that the $16 a share cash offer from HBC represented an attractive premium to estimates on the unaffected stock price, meaning what the stock would be trading at without Saks being in play. They also figured the $16 price was higher than the potential stock price resulting from a different deal, or if Saks remained a stand-alone company. The proxy also noted that $16 was the highest HBC was willing to go, and that the “go-shop” stipulation would insure that the highest price was reasonably attainable. The all-cash component was also a factor “providing shareholders certainty of value and liquidity for their shares, especially when viewed against the risks and uncertainties inherent in the company’s business.”

While many Saks shareholders are happy and relieved that a deal has been struck, many workers at Saks are concerned about the fate of their jobs with the unknowns associated with a new owner coming in. HBC, which operates Lord & Taylor and Hudson’s Bay department stores, expects to realize at least $100 million in annual savings through consolidations, primarily back of the house and layoffs. As one source noted, “There has been a huge amount of stress on the Saks organization.”