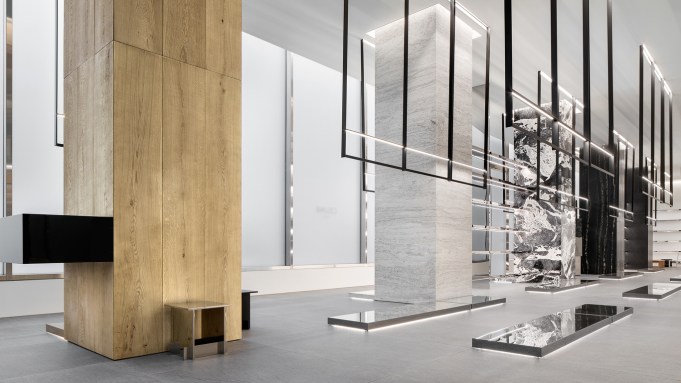 PARIS — Celine is kicking off a major worldwide retail push with the opening on Monday of its flagship on Madison Avenue in Manhattan, the first designed by Hedi Slimane since he took over as creative director of the French fashion house last year.

The concept, which juxtaposes Slimane’s signature graphic design with site-specific artworks, will be rolled out in further locations in New York, Tokyo and Paris between Feb. 25 and early March, the brand said. Additional stores are to follow this year in Los Angeles, London, Milan, Shanghai and Beijing.

The rash of openings comes as Slimane’s first women’s and men’s collections, for spring 2019, hit racks worldwide following the prelaunch of leather goods that began in November.

Séverine Merle, chief executive officer of Celine, said flagships and larger boutiques will offer women’s and men’s together, but some stores will present just one or the other, with the first dedicated men’s wear store set to open on Rue François 1er in Paris in March.

“Celine has a great distribution network and high-quality visibility, but no large stores. We need to open flagships in major cities — larger stores that can accommodate men’s wear and newly expanded women’s collections,” Merle said in an exclusive interview.

“The strategy for both men’s and women’s is to tightly control distribution for reasons of image and clientele. We are focusing on our stores, and we will complement that by concentrating on wholesale distribution in a very selective way,” she added.

The brand plans to expand worldwide with a mix of new stores, relocations, expansions and renovations, though Merle declined to specify the number of existing stores or net openings planned in 2019.

The speed of the expansion reflects the ambitious targets set for the brand by Bernard Arnault, chairman and ceo of parent company LVMH Moët Hennessy Louis Vuitton.

Speaking at the group’s annual results press conference in January, he said Celine was “on the right track” to double revenues to 2 billion euros, which would place it among the group’s most powerful luxury brands, with Louis Vuitton and Christian Dior heading the pack.

A year earlier, he had sounded an even more bullish note, calling for the brand to reach “at least 2 billion to 3 billion euros, and perhaps more, within five years.”

Known for creating temples of black-and-white marble during his tenure at Saint Laurent, Slimane has introduced warmer elements such as wooden furniture, its smaller scale juxtaposed against the expansive space. Basaltina, a Roman lava stone, is used for floors, while walls and shelves come in black granite with ginger and cream veins; Bianco Raffaello white marble from Italy, and Grand Antique marble, a deep black stone with graphic white veining from the South of France.

Other materials include gray travertine, concrete, polished stainless steel, brass and gold mirror, in what the house branded a “refined 21st-century Brutalist context.”

The 5,000-square-foot flagship at 650 Madison Avenue replaces the former Celine store at number 870. A renovated SoHo store is to follow in the next few weeks.

The long rectangular store is all straight angles and hard surfaces. Thick monolithic columns are covered with different stone materials, along with reclaimed oak and polished brass, to imposing effect. The use of stone is repeated in the five dressing rooms, with leather or wood cantilevered benches similar to those seen at Saint Laurent.

There are no mannequins in the flagship. Ready-to-wear hangs from brass fixtures suspended from the 17-foot ceiling, softening the store. Celine’s spring 2019 runway will be featured along with Slimane’s collaboration with American artist Christian Marclay, first shown during the same season. Handbags line shelves near the entrance, while shoes cover the entire back wall across the width of the store.

Resuming a process he started as creative director of Dior Homme, when Slimane invited artists such as Ugo Rondinone, Pierre Huyghe and Doug Aitken to create installations for the fitting rooms of his stores, the designer has tapped artists to contribute pieces, in addition to creating his own furniture for the boutiques.

The Madison Avenue store features a commissioned sculpture made of stone cubes by British artist James Balmforth, as well as a previous work by Mexican artist Jose Dávila, known for incorporating boulders in his installations.

Canadian artist Elaine Cameron-Weir is creating a sculpture for the Omotesando store in Tokyo, and U.S. artist Oscar Tuazon will have a piece in the Rue de Grenelle boutique in Paris, where the ground floor will be expanded and dedicated to women’s wear, and a new second floor will offer the men’s collection.

“There will be men’s wear boutiques in all the major capitals,” Merle said, noting that Celine’s Avenue Montaigne store will remain dedicated to women’s wear.

The executive declined to provide details on how Slimane’s debut handbag designs have performed during the prelaunch phase. “Two bags have already become emblematic for the house, the 16 and the Triomphe, and we will continue to expand the category,” she said.

She did highlight the positive reaction to Slimane’s first dedicated men’s line, shown in January. “The collection has been welcomed very enthusiastically. The savoir-faire and legitimacy of Hedi has made us recover customers and loyal clients. We have total credibility in a growing and incredibly creative market,” Merle reported.

In addition to introducing men’s wear, Slimane has been charged with leading Celine into couture and fragrance.

The media-shy designer has not planned any special events for the openings. “Since the launch of the new project, we’ve been working globally on communication rather than focusing on particular events. It’s a more holistic, authentic and digital approach to significantly extend the reach of Celine’s voice,” Merle explained.