A rendering of Nordstrom at 5 Columbus Circle, on the northwest corner of Broadway and 58th Street.

Nordstrom’s hiring blitz for its New York City flagship is on.

Nearly 1,200 employees in sales and support are being sought for the retailer’s seven-level, 320,000-square-foot women’s store, scheduled to open Oct. 24.

Nordstrom Inc.’s Manhattan flagship is the Seattle-based retailer’s most complicated and expensive opening ever. Two years ago, WWD listed the investment at north of $500 million, but the price tag has gone up since. Nordstrom does not disclose the cost of its stores.

The main entrance for the Nordstrom women’s flagship is at 225 West 57th Street at the base of Central Park Tower which, with 95 floors, is the tallest luxury residential building in the world. There will also be entrances on Broadway and 58th Street.

Nordstrom has long been known for its strong service and needs to at least live up to that reputation in New York, where the competition is fierce.

It’s typical for retailers to staff up for the opening weeks, in anticipation of big crowds and to make the best possible impression. Asked if that would be the case on 57th Street, Young Varua, Nordstrom’s human resources director for New York City, told WWD: “We’re planning to staff appropriately to provide our New York customers with the level of customer service they expect.”

When Nordstrom opens a store, typically experienced, high-performing employees from around the country are brought in to help man it and ensure smooth operations in the early days. “As part of our ‘promote from within’ philosophy, historically, many of our strongest leaders often relocate from Nordstrom stores across the country to open a new Nordstrom store and the New York City flagship is following suit,” Varua explained. “We rely on our seasoned, transfer employees to help demonstrate our culture and brand, lead by example, and educate new employees about Nordstrom and the way we do business.”

Regarding a store manager for the Manhattan flagship, Varua said, “We wanted to think differently about how the store would be led. Rather than have one single store manager, we’ve hired four divisional store managers from our stores across the country for the flagship. The roles operate similarly to a store manager by directly supporting the department business, leadership development, talent recruitment and retention and our service standards. This core group of leaders will operate collaboratively to ensure we’re providing customers with a world-class shopping experience.”

Varua also said the store will have many employees new to Nordstrom, and therefore the training will be “extensive though consistent” to training offered at other stores. It’s possible Nordstrom will recruit some workers from other competing stores around town.

“We will have general training to welcome employees to Nordstrom, which includes education on our history, brand and culture,” Varua said. “In addition, we’ll offer specific training relevant to each division. For example, we’ll offer shoe-fitting training for our Kids Shoes employees, and in our food and beverage areas, employees will receive hands-on service training before we officially open our doors.”

New hires will participate in training and development and “team-building” activities. Hiring events will be held  Aug. 15 to 17 and Aug. 26 to 28 at 205 West 39th Street on the 15th floor.

Varua expressed little concern that filling the staffing needs will be tough, given the nation’s low unemployment rate — 3.7 percent — and tight labor market. “We are confident that we’re going to hire a world-class team based on the feedback and interest we’ve received so far,” Varua said.

Personality-wise and experience-wise, for the sales and support positions Nordstrom is seeking “people who are customer-obsessed and results-driven. People who love selling fashion, working with customers, and making them feel good.…Our culture is inclusive, supportive and competitive. Nordstrom is a great place to grow your career. We believe in rewarding outstanding work, promoting from within and building long-term relationships with our employees,” Varua said.

Retailing tends to have a very high turnover rate, particularly among the sales force, and that’s partly because the hours are long, the work is hard, and too often, management doesn’t do enough to portray retailing as a fulfilling and financially rewarding career.

However, Varua said Nordstrom does spell out possible career paths while interviewing candidates to encourage them. “Absolutely. We’re happy to walk candidates through various career paths available at Nordstrom. Our department managers are the hiring managers and can share their own career pathing.”

Along with service, Nordstrom will be going big on food, technology and women’s fashion and accessories in an attempt to differentiate from the Bloomingdale’s, Bergdorf Goodman, Saks Fifth Avenue, Neiman Marcus and Macy’s anchor stores in Manhattan. But the competition will no doubt beef up their service levels and special offers in advance of the Nordstrom opening, and for the last few years have been undergoing extensive renovations to up their games.

Nordstrom said those seeking jobs at the store can apply at nordstrom.com. The company is offering sales positions in all areas of the store — women’s apparel, designer, shoes, beauty and kids — as well as support positions in alterations, building services, housekeeping, loss prevention, food and beverage.

The company said it will offer “competitive pay,” as well as transit subsidy, a merchandise discount, employee charitable match and volunteering programs, medical coverage to those eligible, and an employer-matched retirement plan. 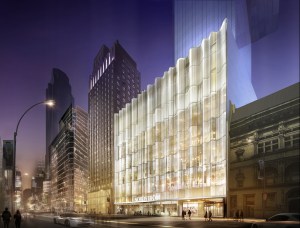