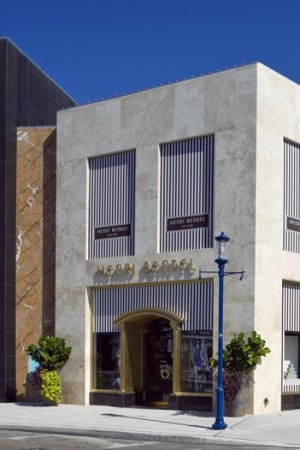 NEW YORK — Henri Bendel is focusing in on its core categories — accessories, beauty and gifts.

Under the retailer’s new strategy, the Fifth Avenue flagship will be downsized as Bendel’s concentrates on its most profitable areas while getting out of apparel. And the concept will be rolled out to shopping malls, where units will offer only Bendel’s branded merchandise. Six stores will open this year, joining the existing four.

Explaining the expansion strategy, Leslie Wexner, chairman and chief executive officer of Bendel’s parent Limited Brands Inc., said Thursday, “Bendel’s is one of the greatest and most recognizable brands in the world.”

Yet Bendel’s has never met Wexner’s criteria for successful brands. The store’s owner since 1985 has said that only brands with the potential to achieve $1 billion in sales are welcome in his stable. He’s also stated he’s happy to be out of the apparel business, having sold the Limited and Express chains in 2007.

As retail experiences its most traumatic period in a generation, the new Bendel’s represents yet another counterintuitive move by the legendary Wexner as he concentrates his empire on beauty and innerwear, having in the past spun off concepts like Abercrombie & Fitch. The refocusing gives Bendel’s another chance to be the cash cow Wexner always wanted.

“It’s no secret that he [Wexner] likes to think big,” said Bendel president and ceo Ed Bucciarelli said. “He reminds me of the fact that he only likes $1 billion businesses whenever [I speak to him]. We’ve been going in this direction for quite a while. It’s a natural progression. Fashion isn’t where we’re seeing our growth.”

He said the brand’s potential can now be fully realized on a national level, with an eye toward global reach. The concept, Bucciarelli said, is “viable in every A mall in the country. We think our strategy will allow us to be successful both domestically and globally.”

Under the plan, the Fifth Avenue flagship will be reduced in size from three to two selling floors, offering accessories, handbags, jewelry, gifts, beauty and fragrance from both third-party vendors and private label. Women’s apparel will be out of the picture, but Frédérick Fekkai will remain on the fourth floor. The fate of the Chocolate Bar on the third floor has not been decided.

Other than a unsuccessful 1991 attempt to expand into other markets with smaller stores — executives projected 40 to 50 units — Bendel’s has usually operated as a single, stand-alone business, an anomaly within the hard-charging, $9 billion Limited Brands. The retailer has frequently struggled to find its fashion footing, unable to secure collections that bigger retailers such as Saks Fifth Avenue, Barneys New York and Bergdorf Goodman had access to, and trying to find the right mix between private label and designer merchandise. Sources said apparel represents only about 25 percent of Bendel’s sales, with the vast majority coming from the categories on which it is now focusing. In past seasons, Bendel’s third floor has carried designers like Missoni, Matthew Williamson, Michael Kors, Alice + Olivia, Milly, Jason Wu and Josh Goot.

It also experimented with obscure designers such as Victor Glemaud and Greta Constantine and launched collections by Lindsay Lohan (leggings) and Monica Lewinsky (handbags) that seemed to be more about hype than substance. Bendel’s held Open See days for unknown designers in the hope of discovering new talent. Bucciarelli said the retailer will continue holding Open See events for beauty, accessories, handbags, jewelry and fragrance.

The Open See idea began during Bendel’s first incarnation on West 57th Street, when talents such as Stephen Burrows, Zoran, Zandra Rhodes and Mary McFadden were discovered in the Sixties and Seventies and longtime president Geraldine Stutz introduced such innovations as the Street of Shops where categories like stockings, tabletop items, stationery, flowers and cosmetics were housed in small side-by-side boutiques. Bendel’s new ownership tried to emulate the creativity of the original store, but retail observers and former customers felt the Fifth Avenue store paled in comparison.

Now, under Bucciarelli, Bendel’s has shifted to typical Limited operating procedure. In the fall, the retailer opened four units to test its new concept, in Easton Town Center in Columbus, Ohio; Fashion Valley Mall in San Diego; Town Center at Boca Raton, and Aventura Mall in Miami. Bendel’s plans to roll out six more accessories boutiques by the end of the year. The next launch will be at The Somerset Collection in Troy, Mich., in mid-July. Asked why the new concept will succeed when the previous incarnation of Bendel’s mall units failed, Bucciarelli said, “The test stores that opened in the fall of 2008 met our expectations. Therefore, we’re confident in our strategy to focus on accessories, beauty and gifts.”

The accessories stores range in size from 1,500 to 2,000 square feet and have a “luxe feeling,” Bucciarelli said. “There’s lots of iconography, like our [brown and white] stripes and Isaak illustrations of fashionable young women in the windows. It’s set up like a candy store.”

Handbags are the cornerstone of the concept, which in the flagship relies on “third-party resources, but we’ll develop our own collection,” Bucciarelli said. “The big story is we’re turning the store into a brand. We’re really stretching the boundaries of what accessories are with hairpieces, gloves, wellies and stationery.”

Bucciarelli said that some Bendel’s employees will lose their jobs but declined to say how many. He also declined to discuss the future of Ann Watson, the store’s vice president and fashion director.

Bucciarelli said the flagship just opened shops for Burn, totes made of water snake in a variety of colors, and Ray Ban’s colorized frames. “We’re excited about a lot of things we’re doing,” he said. “Everything we do appeals to a younger customer.”

In terms of private label, the retailer has created a design team and also hopes to collaborate with designers.

Jennifer Black Groves, a retail analyst and president of Jennifer Black and Assoc., said Bendel’s strategy “really makes sense for a lot of reasons. They can make the [Fifth Avenue] space so much more productive, with apparel being so discretionary and with the opportunities they have with accessories and gifts.