The luxury retailer aimed to achieve a more casual feel. 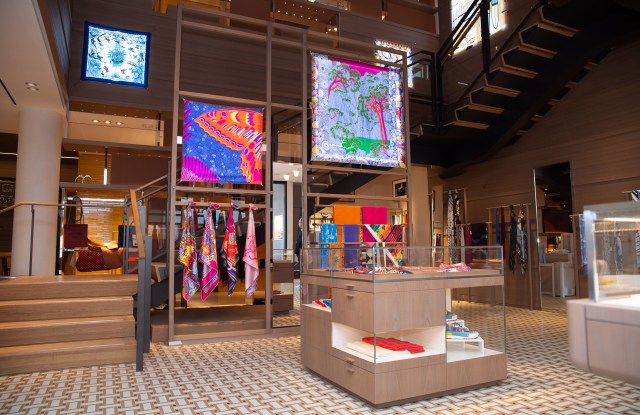 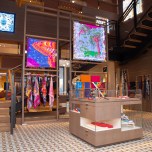 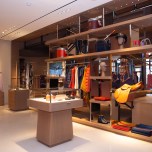 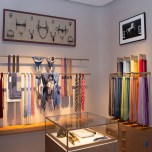 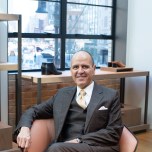 NEW YORK — Hermès wears its age and legacy with pride, but the luxury brand doesn’t dwell solely on its 182-year-old history. The 5,330-square-foot boutique opening Friday at 46 Gansevoort Street in the Meatpacking District is evidence of Hermès’ willingness to take a calculated risk on a location and toss some of its established store design principles out of the lead casement window.

“Hermès has decided to explore new territory,” chief executive officer Axel Dumas said in an introductory letter about the unit. “Not long ago, you wouldn’t have mentioned Madison Avenue [where the brand’s men’s and women’s flagships are located] and the Meatpacking District in the same breath.”

The two-level yellow brick-clad store on the corner of Gansevoort Street and Ninth Avenue sits across from a plaza at the intersection of those streets and Little West 12th. “This will be a high-traffic store. There will be a lot of first-time purchasers and tourists, locals buying gifts and businesspeople,” said Robert Chavez, president and ceo of Hermès USA. “Google’s headquarters is in the neighborhood.

“I’ve spent many days observing the traffic patterns. I don’t think they’re going to change,” he continued. “I’ve known the neighborhood for a long time and watched it transform. The Whitney Museum of American Art opening in 2015 was the game-changer. We think this is going to be a very successful store for us.”

Hermès lightened the store figuratively and literally. There’s a casual sensibility and lighter-hued materials such as silver-gray cherry wood for walls and furniture. Sandblasted for an industrial feel in keeping with the neighborhood’s commercial origins, it’s paired with camel-colored leather and bronze metal.

“We don’t have walls that close sections off,” Chavez said. Open shelving allows for sight views through to the other side of the store. Product areas typically delineated by physical boundaries flow into one another seamlessly. A massive glass and iron skylight, original to the location, floods the store with sunlight, while north-facing windows offer a view of Ninth Avenue.

An open staircase with a large landing and wide steps is meant to be welcoming, said Chavez, adding that the goal was “to give the store a casual, warmer feel.”

The Meatpacking District boutique gives a disproportionate amount of space to “gateway categories,” so-called for their opening price points. Scarves make a big statement, stretched out like canvases and hung front-and-center. They’re draped over special fixtures, allowing more patterns to be seen.

“We’ve devoted more space to scarves, enamel and leather jewelry and men’s ties,” Chavez said. “We have significantly more scarves out on display, and we allowed the masculine and feminine silks to blend into each other. You don’t see that formal break.”

Four Hermès objects were revisited in special-edition cosmos leather as a nod to the district’s spirit, and exclusive to the Meatpacking store are a backpack, hip pack, Hermès bicycle and skateboard bag.

The unit boasts the brand’s first café area with a high bar table with a charging station and chairs. “We’ll serve coffee, tea, wine and sparkling water,” he said. “People can sit here and hang out.”

Near the café, Hermès’ equestrian presentation features the newest Cavale saddle for $8,500. “We have a lot of very loyal equestrian customers,” Chavez said, adding that jackets, ponchos and blankets will appeal to general consumers as well.

“Fragrance is a little overspaced here because of the nature of the location,” Chavez said. “There’s a lot of open-sell so people can touch and feel and smell and discover.”

Nearby, handbags and small leather goods occupy a room. A Himalayan crocodile Birkin bag is safe in its glass vitrine; a Kellyado backpack, $8,250, is a nod to the younger consumers the brand hopes to capture; the Mosaic handbag with gold tile-clasp, $9,350, was inspired by the ex-libris tile mosaic at the store’s entrance, adapted from the original Hermès store at 24 Rue du Faubourg Saint-Honoré in Paris.

During the three years the Meatpacking boutique has been in the works, Hermès opened pop-ups in the neighborhood, including the orange-colored “Hermèsmatic” laundromat in June 2017 at 90 Gansevoort Street, where customers had their scarves dyed. Carre Club in September was a celebration of scarves, or carre, at 459 West 14th Street.

There are signs of luxury’s life in the Meatpacking District, including Jeffrey New York founder Jeffrey Kalinsky’s decision to remain on 14th Street, Loro Piana‘s upcoming store on Ninth Avenue and Dean & DeLuca Stage bowing on Ninth Avenue. “Pastis is reopening next month at 52 Gansevoort St.,” Chavez said. “Restoration Hardware is opening a boutique hotel at 55 Gansevoort, and Starbucks just opened a Roastery on Ninth Avenue.”

Chavez said the landmarked building previously housed photographer Annie Leibovitz’s studio. “Before that, it was a Moroccan restaurant,” he said. “My husband and I used to come here a lot. When I first came down here looking for spaces, and saw this, I said, ‘It can’t be.'”

Footwear, with its blended presentation of men’s and women’s shoes, sits directly beneath the skylight. “We definitely beefed up our assortment with this shoe display,” said Chavez. Men’s ready-to-wear flanks one side of the shoe area, with women’s on the other.

A new jewelry concept aims to take the stiffness and formality out of buying a bauble and features a long high table and bar stools rather than the usual clients sitting opposite sales associates. The relaxed design and opening-priced silver jewelry doesn’t negate serious bling. A gold Galop necklace with black spinels is $100,300, and a white gold Filet d’Or necklace, $251,500.

Asked whether there are more opportunities in Manhattan for Hermès, Chavez demurred. “We have stores on Wall Street, Brookfield Place, and a big project on Madison Avenue,” a reference to a flagship at 706 Madison Avenue that will sell both men’s and women’s in 2022. “We’re good for now.”