The luxury firm is betting that the region's economy will continue on the upswing.

Hermès' newly expanded store at the Royal Hawaiian Center in Waikiki was designed to bring the outdoors into the store.

Hermès of Paris’ third-highest volume store in the U.S. just got bigger in size and scope.

The unit at Royal Hawaiian Center in Waikiki ranks only behind the Hermès stores on Manhattan’s Madison Avenue, and Rodeo Drive in Beverly Hills. Hermès said the expansion is a sign of its strong confidence in the Hawaiian market, where the brand has long had a foothold and has developed a deep understanding of its customers. 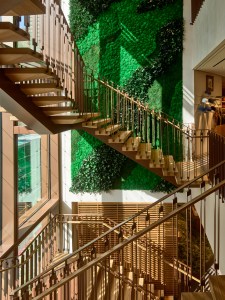 The living wall at Hermès’ flagship in Waikiki.  Frank Oudeman

Hawaii’s economy is expected to continue its positive growth in 2019 and 2020, according to the state’s Department of Business, Economic Development and Tourism. Visitor arrivals are seen increasing 2 percent in 2019, 0.2 of a percentage point above the previous forecast. Visitor arrivals, visitor days and visitor expenditures in 2020 are expected to grow 1.9 percent, 1.7 percent, and 3.7 percent, respectively.

Marking its 30th anniversary at Royal Hawaiian Center happens to dovetail with the opening of the reimagined store, which was expanded to 13,000 square feet from 8,700 square feet.

The boutique was opened to cater to the growing number of visitors from the continental United States, Japan and other regions of the Pacific. Another Hermès unit at the nearby Ala Moana Center store, which is geared more toward local shoppers, was renovated and reopened in 2017.

The renovation and expansion of Hermès’ original Waikiki location transformed it into a three-level flagship. “We really want to give more space to all of the categories,” said Robert Chavez, president and chief executive officer of Hermès USA. “Women’s ready-to-wear has been a big growth category for us, and footwear and men’s have been very strong. This will allow us to dedicate more space to footwear.”

In addition, Chavez cited fine jewelry and watches as historically strong performers at Royal Hawaiian Center. “We created a luxurious ambiance for these categories that we didn’t have before.” The ceo said the Waikiki flagship won’t adopt the innovation at Hermès’ new Gansevoort Street store in Manhattan’s Meatpacking District. In an effort to take the stiffness and formality out of jewelry buying, consumers and associates there peruse designs while sitting on bar stools at a high table.

The new space is “a big increase. You’ll see the expansiveness of the ground-floor categories such as silk scarves, enamel jewelry, and accessories. We’re getting ready for the launch of our beauty,” Chavez added, referring to Hermès’ plans to launch treatment products and color cosmetics in 2020. “We spaced the store accordingly.”

The second floor is dedicated to men’s and home products. The new third floor has been given over to a women’s universe of products as well as a private salon. “We’re now able to add VIP rooms. They’re important rooms because they create comfort,” Chavez said. “We’ve created larger spaces [throughout the store] to enhance the customer experience. There’s a café where people can sit and relax and drink a glass of sparkling water, tea, coffee or even wine.”

The flagship’s exterior structure has a special treatment that provides the effect of claustra panels, which allow light into the store while providing shade from the tropical sunlight. Two metal canopies give additional shelter. A three-story window on the side entrance is framed by a cable grid to encourage climbing plants to create a living wall, while two large windows on Kalakaua Avenue feature intricate bead sculptures by Mexican-American artist Raúl de Nieves.

“It’s strikingly different because the old building was very fragmented,” Chavez said. “The second floor was cantilevered and you could barely see the sign. That tended to block a lot of the natural light. Now we’ve completely redone the facade on the store, there’s a lot of windows and a lot of natural light. It’s really opening everything up and almost connects to the outdoors.”

Chavez said Royal Hawaiian has been making improvements in the retail mix. “Tiffany moved from a smaller center and is two doors down from us. Tiffany draws traffic,” Chavez said. “Harry Winston and Ferragamo built beautiful stores.”