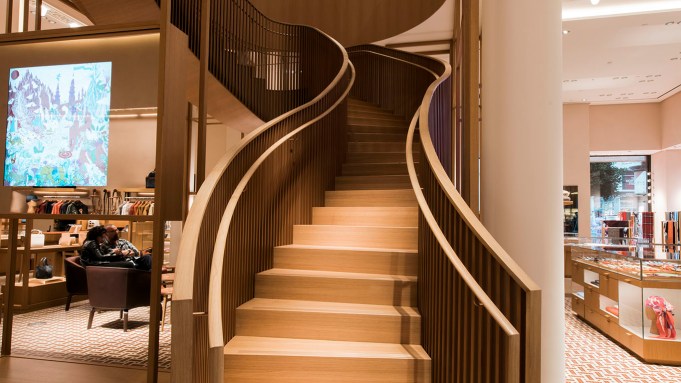 Hermès’ love affair with the Bay Area is no passing fancy. The company, which first landed in San Francisco in 1988, has dotted the area’s streets — landing first in Union Square, moving to the premium designer district on Grant Avenue near Maiden Lane in 2003, and then into a temporary space on Post Street, while it underwent a major renovation. In between, it also opened a second location in nearby Palo Alto last year.

Now, the luxury brand is returning home to Grant Avenue, but in an all-new, two-story environment. With the renovation, the new flagship is one of the brand’s largest boutiques.

Hermès offered WWD a preview of the space, ahead of the store’s reopening on Nov. 15.

According to Robert Chavez, president and chief executive officer of Hermès U.S., the site itself is a piece of retail history, as it was once home to the original Saks Fifth Avenue, when it arrived in the city.

Architecture firm RDAI designed the 9,000-foot space, incorporating traditional Hermès elements with a California sensibility: “We love to say that the horse was our first client, so we stayed loyal to our first client,” Chavez pointed out during the exclusive tour. “Here you can see everything from saddles to bridles to all the equestrian clothing, you see the rain ponchos which have been very popular.”

Natural materials — with stone, light woods, tile — factor heavily, while numerous windows across both floors let in ample daylight. Chavez believes the whole effect rather warms the space and makes it feel even more inviting.

Design details, like the Greco-inspired lighting designs and mosaic tile in the floor, are from the original store in Paris. The colorations can differ from store to store, but the themes are very much a part of the Hermès history.

Large windows adorn the space, allowing for plenty of daylight. The Bay Area’s nature bent shows up in the light-colored woods and the long, floating staircase, which is hewn from wood and stone and grounds the store.

Among the changes, the company enlarged the silk department and added touches, like a digital scarf wall, so staff can show a variety of scarves easily without pulling out product, or conjure styles not physically on site. San Francisco is the third store to feature the tech wall, after Palo Alto and Orlando.

Naturally, like the brand’s other boutiques, merchandise lives in dedicated sections. The first floor hosts men’s silk, men’s and women’s bags, jewelry and accessories, a leather department (including belts), as well as spaces for writing instruments and stationery.

There are also unique areas: a new perfumery, for example.

“We overspaced it a little bit, because we’re expanding into beauty next year,” Chavez explained. Hermès will be launching lipsticks in March, he added, so the company ensured that San Francisco was prepared. “So that’s what this particular area will convert to in the spring,” he said.

The room will allow for application and consultation covering a total of 24 colors at launch, and more when seasonal three-color collections cycle in and out. While the makeup room is not exclusive to San Francisco — with as many as 20 U.S. locations in the mix — “this is one store where we really want to feature that new collection,” he said.

The second floor hosts the home area, from furniture to accessories, as well as the Hermès baby collection. Behind slat walls, another room sits, with a long table set with crystal and dinner ware. If VIP clients wish to book the space for an intimate brunch, Chavez seems open to the idea.

The Hermès version of experiential retail ranges from little details, such as bag hooks built into some of the tables, to comfortable seating areas and even a coffee bar with charging stations for electronics. Luxurious private rooms allow VIP guests to lounge in privacy, as staffers bring items to them, or get fitted for made-to-measure goods from onsite craftsmen, which is a rare offering for the boutiques.

“You hear a lot of talk about experiential retail today, and for us, the experience is about making customers feel welcome and comfortable…as if you’re in a home,” Chavez explained.

The company is clearly proud of its collections, whether seasonal offerings or special editions — such as its latest San Francisco exclusives. The store will showcase the new Kelly 25 bag — a $33,300 hand-embroidered style in blue calfskin and canvas, or gold calfskin — along with a fishing basket bag for $16,100 and a special-edition Apple Watch Hermès Series 5 Deep Blue Swift Calfskin Medor bands, from $499 to $599 for single or double tour styles, respectively.

The men’s section is impressive as well. “We have a beautiful men’s shoe wall, which is quite extensive,” said Chavez. “I would say it’s probably one of the most extensive offerings that we have in any of our stores in the U.S.” He figures men’s product accounts for roughly 12 to 15 percent of the store’s total, with big potential to do more.

In some ways, Hermès is an anomaly. It’s a classic luxury brand that partners with the likes of Apple — they share a “commitment to quality and to craftsmanship and to innovation,” Chavez explained — and while brick-and-mortar retail sinks many other stores, it makes up most of Hermès’ booming business.

That doesn’t mean the company is racing to unleash fleets of new boutiques. That’s not the Hermés way. The company is more reflective and considered than that.

“We have 310 stores worldwide, which is exactly the number of stores we had eight years ago,” said Florian Craen, executive vice president of sales and distribution for Hermés’ global operation.

“At this same time, we’re expanding in many countries. But we are not expanding the number of doors, so the contact point remains exclusive, selective, scarce. Of course,” he added.

Given the Bay Area environment, it’s natural to wonder about how the classic, luxury brand fares in an increasingly fast-paced, digital world.

Turns out, Hermés sees itself as a disruptor — just a different sort.

“In a way, the most disruptive experience is with a very low-tech environment,” Craen said. “You know, there’s very limited screens. There’s no music. It’s all about objects, materials to touch, people to talk to, places to sit — which is quite disruptive in this world.”