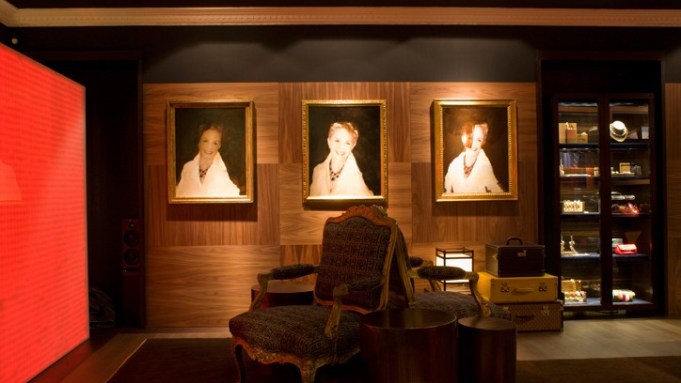 While many companies are hunkering down given the sputtering global economy, Carolina Herrera is forging ahead with new stores, sharper pricing and an aggressive rollout of CH Carolina Herrera.

“Fashion is about movement. It is a dream you can make a reality when people wear your clothes,” the designer said during a Monday morning interview with Marc Puig, chairman and chief executive officer of the Puig Beauty & Fashion Group, which owns the Herrera fashion house.

While some might argue last year was one bad dream given the recession, the duo is determined not to get mired down by the malaise that seems to have engulfed many shoppers around the globe.

Within the last month alone, the designer has unveiled a Las Vegas store with Herrera’s fashion show projected on the exterior — the label’s fifth boutique — and a concept shop in Moscow’s Tsum department store. The company has also secured a 2,300-square-foot location for the first freestanding CH Carolina Herrera store in the U.S. at 802 Madison Avenue in Manhattan. There are plans to open 25 more CH Carolina Herrera stores worldwide in 2010, including 10 in the U.S. — all of which will be designed by Spanish architects to maintain a consistent design. Worldwide, there are 152 CH shop-in-shops and 48 freestanding stores. With hardwood floors, welcoming seating areas, burning scented candles and a wide range of merchandise, the boutiques have appealed to an array of shoppers beyond those who might be more at home at a Carolina Herrera fashion show.

“From the beginning, I loved the concept of CH. It is a lifestyle boutique where you can find anything you want — for a man, for a woman, for children, even for dogs. It is a very complete boutique. I thought it was very cozy, like a house or a place where you want to stay to have a cup of tea or coffee, or a drink, and you want to come back. And you cannot leave there without buying something because it is very attractive,” Herrera said. “It is a very warm place, not one of those boutiques where you have neon lights and you see something very modern.”

The company is also on the move to line up a domestic retail partner to introduce CH Carolina Herrera shop-in-shops. With average retail prices less than half of the Carolina Herrera New York Collection, the secondary label is seen as a growth opportunity in these days of lower consumer spending. “It is true that the [financial] crisis makes lifestyle [items] more attractive than a designer price label to the consumer. That’s why we see CH expanding worldwide,” Puig said, noting the Middle East, Russia, Latin America and Asia are among the leading potential growth areas.

“We are very excited with the Carolina Herrera house as a whole. We have a very solid presence in different categories in different geographical areas. We feel very comfortable that our different pillars are very sound,” Puig said. “We have our hands full with many projects. We just have to make things work.”

Optimistic as he is, Puig is not banking on any quick fixes for the global recession. “It will be a slow recovery. It will take a few years,” he said, but predicted the U.S. will be among the first to recover, albeit slowly. Asked how the collection stores are holding up in this market, Herrera said, “Everything is difficult. It was difficult in 2009.”

Puig added, “I would say we have not had a different performance than most other houses at that level.”

That said, he does not anticipate any layoffs at Herrera’s 65-person company this year. To try to be more competitive with other designer labels, the company has sharpened prices by about 10 percent and six to eight styles have been added to increase the opening price point options. “The change in pricing is very difficult but it is there. You need to do it because there is a lot of competition and there is a challenge,” Herrera said. “You have to react. It’s not as though we cut prices in half, but it is something acceptable for the public.

“I’m always confident and do you know why — because women never stop buying,” Herrera said. “When you can no longer afford clothing, you buy fragrances or cosmetics.”

A CH Carolina Herrera fragrance for men was introduced late last year and will bow in the U.S. later this year. Its advertising has all the elements of ads for the label’s products for women — humor, elegance, sophistication, the CH logo and loads of red. “You cannot miss it. I think advertising is very important because the more you see it, the more you want to go and investigate what is going on,” she said.

A search is also on for a new president for the Herrera company, but neither Puig nor the designer appears to be in any hurry to fill the post that Mario Grauso vacated when he left the company in September to join Vera Wang. So much so that Puig said a decision should be made some time in the next six months.

“It has to be the right one. I have said that many times. I can wait,” Herrera said.

Well aware consumers are in search of experiences, not just purchases, Herrera plans to host a bridal fashion show in her Madison Avenue boutique this spring with select American Express shoppers. “They want to shop in a different way. What they do with American Express is they bring in a group of women who really like to shop. If they don’t buy at that moment, they will come back with a friend or a husband,” she said.

On another front, the designer will stage a fashion show and cocktail party at Neiman Marcus in Palm Beach, Fla., Wednesday for 230 women. “It is always good to have an event because it is an opportunity to meet people and to get people together,” she said.

While many need incentive to get out to shop these days, “the most important thing is that they like the clothes, that they fit and that they buy them,” she said. “The design of the clothes has to be right to the point that a woman feels she has to have it and she cannot live without it. That is a challenge. You have to show something that is fantasy and part reality — something that can be worn, that fits well and they feel well in and they want to come back and buy it,” she said. “Now we have a bigger challenge. The creativity has to be more special.”

With a relatively full agenda set for 2010, Herrera and Puig plan to concentrate on what they have already mapped out. “I think it is better to take care of the categories we have,” said Herrera. “Sometimes I think people have too many licenses just to say they have licenses, but they don’t work. So why do you want to put your name on licenses? I think you have to focus on what you have to make it grow.”

Having rattled off 22 interviews in two days during her Moscow debut, Herrera is unruffled by consumers’ ever increasing thirst for all things celebrity. “If you’re selling something, you have to be public,” she said. “Well, I am very pleased when they recognize me in the airport or wherever I am and they ask if they can have a photograph or an autograph. It means we are doing something good because they know you. If they don’t know you, you’re nowhere.”