British Prime Minister Boris Johnson is lifting England’s national lockdown on Dec. 2, with nonessential retail to reopen and closing times for restaurants and pubs in some regions to be pushed to 11 p.m.

Selfridges debuts its "Once Upon a Christmas" festive campaign.

On Monday, British Prime Minister Boris Johnson laid out his plan to ease lockdown 2.0 in the U.K., a four-week ban on all nonessential retail, salons, restaurants and pubs, that took effect earlier this month to stem the spread of COVID-19. Johnson had originally given the date of easing as Dec. 2, but made it clear the date could have easily been extended.

Christmas usually starts early in the U.K., at the end of October, so retailers were understandably angry, and disappointed, at having to shut their doors, once again, in the run-up to their most lucrative sales season. Since physical stores went dark in early November, retailers have been pressing e-commerce into action, persisting with online Christmas shops, and decorating their seasonal windows — even if few shoppers have been around to look at them.

In a video address to Parliament, Johnson, who nearly died from the virus in the spring, and who has been self-isolating after coming into contact with a person who tested positive, said there were no plans to renew the lockdown measures.

Instead, on Dec. 2, England would return to a tier-based system of restrictions based on local infection numbers and hospital admissions. 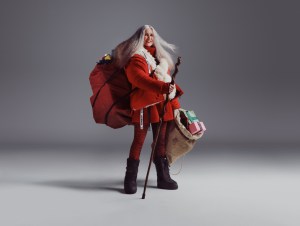 Selfridges debuts its “Once Upon a Christmas” festive campaign.  Courtesy of Matt Writtle

“This is not a pandemic without end,” Johnson said, suggesting that life in the U.K. might return to normal by spring 2021.

The prime minister added that “2020 has been a tragic year in many respects, we’re facing a hard winter and there is a long road to spring, but we’ve turned a corner and there is an escape route in sight. For the first time since this wretched virus took hold, we can see a route out of this pandemic.”

Later this week, Johnson is expected to say that families from multiple households will be able to mix for a limited number of days indoors between Christmas and New Year’s.

“I can’t say that Christmas will be normal this year, but in a period of adversity, time with loved ones is even more precious to people of all faiths, and none. We all want some kind of Christmas. We need it and we certainly feel we deserve it. But we don’t want to throw caution to the wind, and allow the virus to flare up again, forcing us back into lockdown in January.”

His announcement came just hours after Oxford University scientists touted their “vaccine for the world,” a two-shot drug that could potentially be up to 90 percent effective. Pending regulatory approval, the Cambridge, England-based drug company AstraZeneca, which has been working with the Oxford scientists, will begin distributing the vaccine in December.

In the meantime, cases of COVID-19 have been falling across the U.K., and are 23 percent lower this week compared with last. 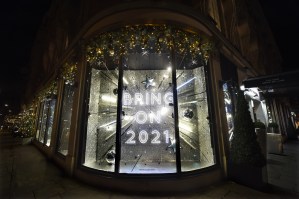 For retailers with physical stores, the easing of restrictions cannot come soon enough. “Retailers have spent hundreds of millions [of pounds] on safety measures to protect colleagues and customers, and they stand prepared for reopening,” said Helen Dickinson, chief executive officer of the British Retail Consortium.

As of Dec. 2, some stores are preparing to stretch their opening hours to the limit. Marks & Spencer said it will remain open until midnight in the week before Christmas.

According to the latest results from Springboard, which measures retail footfall, city centers have borne the brunt of the second lockdown, with central London particularly hard hit. Springboard said that for the week ended Nov. 21, the annual decline in footfall in central London was 80.4 percent, compared with the annual decline in regional cities, such as York and Manchester, of 64.4 percent.

Central London is suffering from a lack of office workers who are usually shopping and making merry at this time of year, and national and international tourists, who would normally be arriving in waves ahead of the holiday season.

Instead the capital’s shopping streets are empty.

“Our team worked so hard to decorate the windows and the store, which no one has had a chance to see. We hope they give everyone joy in this tricky year. Peace, love and Liberty for Christmas,” said a spokeswoman for the London store.

Liberty wasn’t the only store that decorated its windows in a void. Selfridges and Harvey Nichols have also unveiled their seasonal displays, and put gifts, toys and decorations online. Harrods will do its big reveal next week, as lockdown is easing.

New West End Company flipped on the Christmas lights around Regent and Oxford Streets earlier this month, despite the fact some retailers on the street have not reopened since the first lockdown began in March. 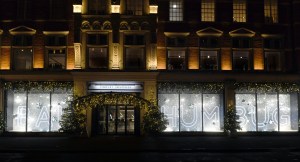 Harvey Nichols has unveiled its 2020 Christmas windows in the midst of a national lockdown in England.  Image Courtesy of Harvey Nichols

As reported, New West End Company, which represents 600 retail and hospitality businesses around Oxford and Regent Streets, said retailers in those areas will miss out on sales worth 2 billion pounds during the Christmas period due to the November lockdown measures, which began earlier this month.

New West End Company said that even before stores went dark, trading rates were already down by 64 percent compared to pre-pandemic levels in 2019.

Johnson reinstated lockdown because he feared the potential number of deaths in England could be “twice as bad” as the first wave earlier this year, and that all the ventilator beds in National Health Service hospitals would be filled to capacity by the end of November if no emergency measures were taken.

“No responsible prime minister could ignore the message of those figures,” said Johnson. “We need to get the rates of infection down. It would be a medical and moral disaster if we run out of beds.”

Johnson emphasized that the NHS also needs to keep treating non-COVID-19 patients, such as people undergoing cancer treatment, and cannot risk being overwhelmed.