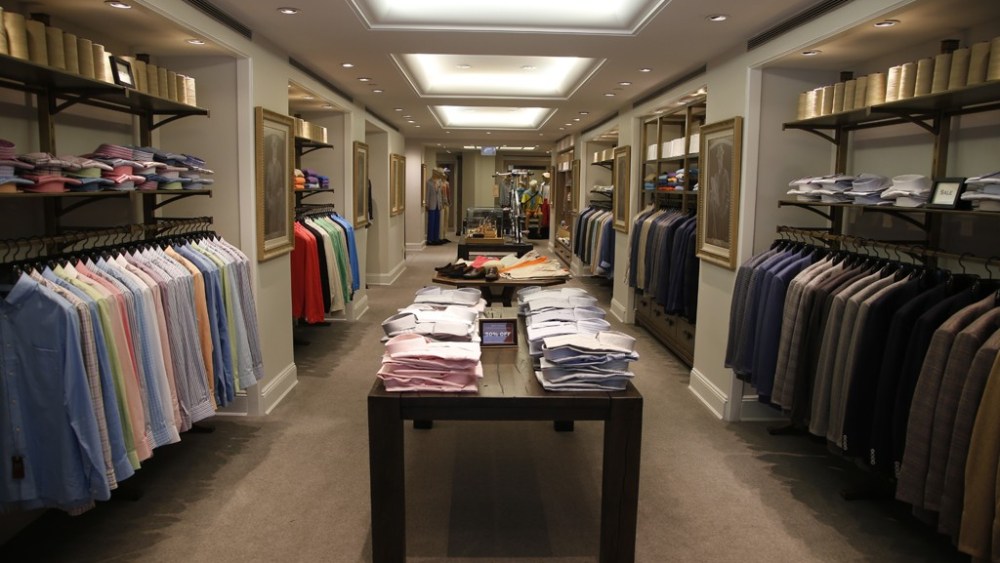 “We started this process in 2011, then with the HMX bankruptcy, it was put on hold. But as soon as W Diamond acquired the assets, we started back up again,” he said.

Last fall, Grano Retail Holdings, parent company of Montreal-based Samuelsohn, finalized its acquisition of all the tangible assets of the Hickey Freeman brand, including its factory in Rochester, from W Diamond Group. However, W Diamond retained ownership of the retail store. Williams was the former ceo of HMX Group.

The renovation started at the end of January, and since the interior was completed at the end of May, Williams said, sales are up 64 percent over last year. Made-to-measure, which has a dedicated room on the second floor of the 2,500-square-foot unit at 543 Madison Avenue, is selling 30 garments a week. “And our off-the-rack business is great, too.”

Williams said the store had sales of $4.5 million last year, but he’s projecting $6 million in sales in the first year following the completion of the renovation.

In addition to getting a major facelift, which includes updated lighting, fixtures and displays, the store includes an assortment of Hickey Freeman licensed products as well as several third-party brands. These include Shinola watches, Allen Edmonds, Noah Waxman and Austen Heller shoes; Title of Work tie bars, and Libero Ferrero bags, as well as scarves, belts, hats and other categories licensed to outside vendors. “Where there isn’t a Hickey Freeman licensee today, we’ve reached out to other American artisans,” he said.

Most of the third-party product is made in the U.S., a hallmark of Hickey Freeman suits as well, and a key selling point for the store, Williams said. “In the past, when we sold a suit, we’d sell a shirt and a tie as well. Now, we can sell a scarf, a watch and shoes, too.”

To help customers get inspired by the merchandise choices, Williams said, the company’s visual merchandising guru, Tom Beebe, has installed 38 mannequins around the store and also included a variety of other props such as magnifying glasses wrapped with neckties to spur sales. “I was taught to think of a store as a movie,” Williams said. “And when our customers come in, we want to put on a perfect movie every day.”

The main floor of the unit offers sportswear, furnishings, sport coats and other lifestyle product, with a boys’ wear room tucked into the rear. The second floor features tailored clothing and made-to-measure. “We’re really showing our dedication to made-to-measure by giving it its own private environment,” Williams said.

He said the store is viewed as a prototype for future expansion, both in the U.S. and abroad. Any retail additions would have to be approved by Grano, but could potentially be operated by Williams. “We’re proving the viability of the model,” he said.

Williams said he also believes there’s “a Hart Schaffner Marx version of this” that could possibly be added within the next one to two years. Authentic Brands Group owns the HSM brand, and W Diamond holds the license and owns its factory in Chicago. Peerless Clothing International handles the distribution, marketing and sales.

“My HSM business is on fire,” Williams said. He said sales got a boost from the exit of the Joseph Abboud brand from the wholesale market. “That really opened the door,” he said, noting that “full-price sell-throughs are great” at retailers including Dillard’s and Nordstrom. “We shipped over 70,000 suits and sport coats for spring and only had 120 suits and 200 sport coats in excess inventory.

“We’re seeing the same thing in the store here,” he added of Hickey. “Our average suit price out-the-door is up 37 percent over a year ago.”

Williams said the company’s financial difficulties are behind it now and the $10 million in debt the company assumed when it was created, financed by Salus Capital, was paid off in January. It now has a financing arrangement with Rosenthal & Rosenthal. As a result, Williams can pour his full attention into the operation of the store and its brands. “I can be a merchant again,” he said.