H&M Opens on the Champs-Elysées 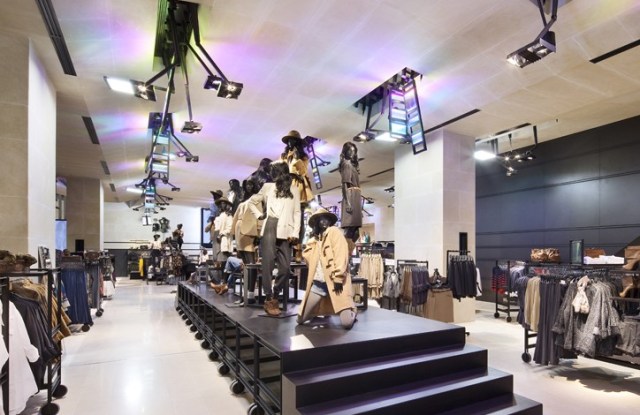 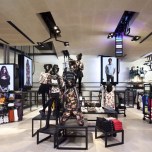 The world’s third-largest fashion retailer today opened the doors of the store, designed by French architect Jean Nouvel, at number 88, marking a symbolic victory after protracted tussling with city authorities, who are trying to limit the presence of high-street retailers on the exclusive stretch.

Chief executive officer Karl-Johan Persson said it was important for H&M to be present on what has been dubbed “the world’s most beautiful avenue,” alongside brands ranging from Gap and Monoprix to Louis Vuitton and Cartier.

“The mix is fantastic, and I think it reflects the way people are dressing today,” he told WWD. “I think definitely this store adds something to the whole shopping experience on Champs-Elysées, so it’s good for us and good for tourists here, and Parisians.”

In the interview, Persson said negative external factors were likely to impact profitability in the months ahead, and hinted that change could be afoot on the designer collaboration front.

With 140 H&M stores and six units for its higher-priced COS concept, France is the second most important sales market for H&M, though far behind Germany.

Sales here totaled 6.57 billion Swedish kronor, or $896 million, in the nine months to Aug. 31, up from 6.19 billion kronor, or $779 million, in the same period a year earlier. Dollar amounts are calculated at average exchange rates for the period in question.

The retailer, which pioneered designer collaborations with its Karl Lagerfeld collection in 2004, will cement its Gallic ties when it launches the Lanvin for H&M line for women and men in 200 stores worldwide on Nov. 23.

Nouvel, who won the Pritzker Architecture Prize in 2008, has clad the three-story, 30,000-square-foot Champs-Elysées store in light sandstone to create a feeling of seamless transition from the pavement to the interior. Changing lights and moving screens complement the window displays.

It is only the second time H&M has recruited a prestigious architect to design a store, after working with Javier Mariscal in 2008 on its flagship in Portal de l’Angel in Barcelona.

Asked if H&M could move toward a more permanent relationship with a designer, similar to the one between Jil Sander and Japanese fashion giant Fast Retailing Co. Ltd, Persson replied, “Maybe, maybe. We don’t have anything to tell you today, but we’re looking at new things all the time.”

Creative thinking will be key in the coming months, as the retailer faces an increasingly challenging environment.

H&M last week reported that profits rose 22.6 percent in the third quarter, but warned that it would miss its target of 240 store openings worldwide in 2010 because the completion of some shopping malls, mainly in southern Europe, had been halted as a consequence of the weak economy. The company now expects to open 220 stores this year.

Persson noted that H&M took advantage of the downturn last year to snap up real estate left vacant by other retailers, upping its initial target of 225 store openings in 2009 to 250. Now that demand is heating up again, it has fewer alternatives when a deal is put on hold.

“Going forward, we still think that we can stick to our expansion goal of opening 10 to 15 percent [additional] new stores every year,” he said. However, he acknowledged the retail landscape is becoming more cutthroat. “Looking back 10 years and how it is today, the retail environment is definitely more competitive, and it will increase. There are more companies popping up all the time, and the best companies are improving,” Persson said.

Other external factors are also pressuring the bottom line. H&M said gross margin — a key measure of profitability — fell to 60.5 percent of sales in the third quarter from 61.6 percent in the year-ago period, and Persson warned it would come under further pressure.

“We are increasing like-for-like selling, so we’re happy with the development. It’s just that now, looking forward, there are external factors affecting us, and all other things being equal, it will affect the gross margin negatively,” he predicted.

“We have currency movements against us, we have the raw materials going against us, transport prices are up, the capacity surplus that we saw for quite some time at the suppliers — that is actually decreasing,” he explained.

Though the market will doubtless penalize any drop in profitability, Persson — who was named ceo last year — reiterated that the gross margin was not the company’s key target.

“Of course profitability is important, but we are a very customer-focused company,” he said. “For us, I don’t think it’s the right thing to steer the company after a certain gross margin.”

Instead, H&M is focusing on extending its reach in emerging markets. It will open its first store in Turkey in November and is looking to enter India, where Spanish rival Inditex’s Zara chain recently opened several stores.

“We are looking, but they have regulations there where you can’t own 100 percent of the company, and when we go into India, we want to have full control,” Persson said.