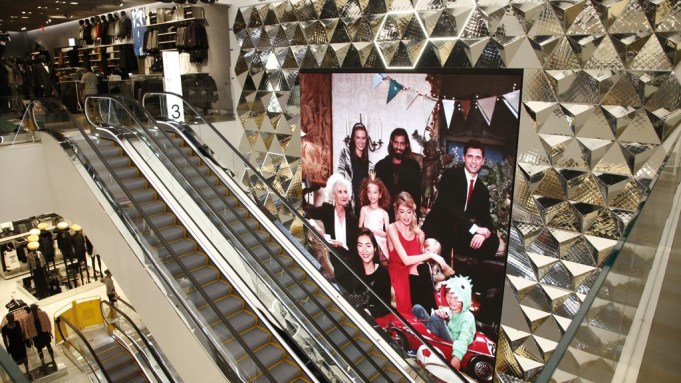 NEW YORK — H&M’s 42,000-square-foot flagship at 4 Times Square here takes the notion of high tech to the next level.

Daniel Kulle, president of H&M North America, said the flagship will be the company’s most productive store in North America once it opens at 12:01 a.m. Thursday with an appearance by Lady Gaga, who is expected to interact with customers and shop at the store for several hours. She’ll be wearing some semblance of H&M, said Kulle. The performer, who released an album Monday, was amenable to the opportunity for publicity. H&M is selling the album at 175 stores worldwide.

“She’s an artist, she’s going to make some noise,” he said.

The flagship has 300 employees, 44 fitting rooms and 24 cash registers. One innovation — try and buy — allows shoppers to pay for purchases in the dressing-room area. “This is going to be a high-volume store,” Kulle said. “Everything has been set up for high volume,” even the hours of operation, which will be 9 a.m. to 1 a.m., seven days a week.

H&M had better produce high sales in the new store. According to real estate sources, the demand for Times Square retail space has pushed asking rents for some spaces to $2,500 a square foot, making it among the priciest real estate in the city. The fast-fashion chain is the latest clothing retailer to open in Times Square, joining such retailers as Aéropostale, Sephora and the Disney Store.

RELATED STORY: COS Builds Base for Expansion >>

Brokers projected sales per square foot of $3,000 to $4,000 for smaller tenants, somewhat less for those that use more space. “The sales volumes coming out of the Times Square locations have surpassed sales in many stores in other areas of the city,” said Robin Abrams, a broker at Lansco.

A 56,000-square-foot H&M flagship at Fifth Avenue and 48th Street, opening in the spring, will be a bookend to the 4 Times Square unit with a theme equally bold, but one that is still under wraps. There’s yet another giant store planned for 1 Herald Center, opening in fall 2014, that will be the retailer’s largest store in the world with 63,000 square feet of space.

The concentration of stores appears to be an attempt to capture market share from competitors such as Zara and Forever 21.

With the opening of the 4 Times Square store, H&M is planting its most visible flag in Manhattan. The new store will be its 12th unit here.

The store represents a significantly higher spend on technology. “There are many components,” Kulle said. “We can flex our H&M muscles to whatever we want, because the city allows it. It’s expected.”

Two 30-by-20-foot LED screens hang on the Broadway and 42rd Street sides of the building. Next to each screen is a vertical H&M sign. A curved 40-by-109-foot LED screen is located above the H&M logo atop the main entrance. The ground-floor windows facing the street are interactive. Light boxes with messages are found throughout the store. In addition, four 70-foot-high logos on the building’s 45th floor will be lit in a New Year’s Eve-style countdown to the store opening. “We’re going to dominate the Manhattan skyline,” Kulle said.

That’s just the outside. Indoors, there are two LED portals above the entrance that display different graphic experiences, a display of revolving mannequins, vertical LED screens behind the fashion display, and a gigantic 20-by-30-foot LED screen over the cash wrap. All in all, there is more than 7,000 square feet of LED screens. The second- and third-floor fitting-room areas have iPad stations and benches.

Trusses with industrial lighting can be found throughout the store. Hanging from the third-floor ceiling, 53 feet above the ground floor, are trusses that can be raised and lowered. From them will hang mannequins, Kulle said. “We have cages for them and we can hang them in different ways so they look like they’re flying.” Another design feature is a “glitter wall” behind the cash wrap and rising from the ground floor to the third floor. It looks like a 3-D silver quilt and is actually made of mirror-polished stainless steel.

“We’re excited to get the most trafficked corner of 42nd Street and Broadway and the biggest subway station,” said Kulle. The station, at West 42nd Street, Broadway and Seventh Avenue, is the busiest in New York with no less than eight subway lines converging. Last year, more than 62 million people passed through the complex.

The three-level store features accessories, shoes and an expanded cosmetics line on the ground floor, women’s on the second and men’s and kids on the third. A staircase to the mezzanine leads to the DJ booth, which will spin music continuously. There’s also a digital runway for shoppers to strut their stuff, which will provide content for the LED screens. Shoppers choose an outfit in the nearby dressing rooms, enter their e-mail address into a computer and await the signal: “Walk” on a red flashing sign. Each “model” is told what time his/her image will be on view on the screens inside and out. Images sent to shoppers’ e-mail accounts can be used on social media. It’s another way to further the brand, Kulle said, noting that images will be tagged H&M Times Square.

Asked whether H&M will build other tech-heavy stores, Kulle said, “I’m not saying it’s not going to happen. We want to make stores that make the brand. The Fifth Avenue store will be a knockout in a different way. [Consumers] will feel they must see both.”

The Times Square store will be the first worldwide to offer Isabel Marant for H&M, the retailer’s next designer collaboration, on Thursday. Marant designed collections for women, men, teens and girls and boys. “Isabel will sell out in less than a week,” Kulle predicted. He said it’s the retailer’s largest designer collaboration since Martin Margiela, which had the same number of styles, but more accessories and shoes.

In the general collection, premium product is represented by merino and cashmere sweaters, 100 percent cotton shirts, and for men, wool suits for $249. There are extended shoe offerings for men and women and Dividend, a younger, trendier collection featuring army fatigue fabric and checked flannel shirts.

Opening offers include $5 men’s button-down shirts and short-sleeve pique shirts, and $3 T-shirts. Throughout the opening period there will be different offers every hour, including buy one sweater, get one free; get $30 off for every $100 spent; 20 percent off an entire purchase, and buy one accessory, get one free.

Kulle said the Times Square flagship is just one aspect of H&M’s growth. “We have a heavy expansion and rebuilding program,” he said, noting that the Newbury Street flagship in Boston, Michigan Avenue flagship in Chicago, Powell Street store in San Francisco and Fifth Avenue and 18th Street unit here are all being remodeled.

The Times Square unit has been in the works for a year. Not all has gone smoothly. The city has closed sidewalks on 42nd Street and Broadway due to its own construction, and H&M hasn’t been able to install the curved LED screen above the entrance because the city doesn’t want it to interfere with pedestrian traffic. Kulle seemed unfazed. “We’re going to be ready for showtime,” he said.