New fashion brand & Other Stories will open physical and online stores in Europe in the spring. 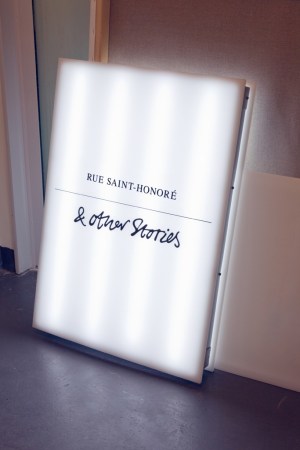 PARIS — Bucking the prevailing economic gloom, Hennes & Mauritz AB is going full steam ahead with its brand diversification, with the opening in the spring of the first physical and online stores for its new brand, & Other Stories.

Averaging 7,500 square feet in size, the stores will sit in high-profile locations such as Regent Street in London, Rue Saint-Honoré in Paris and Corso Vittorio Emanuele in Milan to give the brand maximum visibility.

In addition, an e-commerce site, stories.com, will launch in Belgium, Denmark, Finland, France, Germany, Italy, the Netherlands, Spain, Sweden and the U.K.

Prices will begin where H&M stops, although the retailer has said & Other Stories will feature a wider spread than its high-end concept COS.

Prices will start at 7 euros, or $9 at current exchange, for certain cosmetics, jewelry and footwear items, and 15 euros, or $20, for ready-to-wear. The most expensive products will cost about 195 euros, or $255, for shoes or handbags and 245 euros, or $320, for a leather jacket, for example.

H&M said the lines are “diverse, ranging from masculine tailoring to feminine chic and are designed to provide endless styling choices. The aim is to design lasting wardrobe treasures within a wide price range.”

The creative department for & Other Stories is based largely in Paris, and is led by head of design Anna Teurnell, although a second, smaller team is based in Stockholm.

Elke Kieft, p.r. manager for & Other Stories, said there would be four different product universes within the brand, corresponding to different styles. The brand’s handwritten logo will be used on store signs and clothing tags, sometimes in combination with other words, separated by a thin black line — for example, “Rue Saint-Honoré & Other Stories.”

“You will be seeing it a lot. It could be a price tag on the garment. It will look exactly the same with the line through the middle, and it could be ‘Leather & Other Stories’ or ‘Cashmere & Other Stories.’ We can continuously play with that name, and that is the idea behind it, because we want to let people know what we are about,” Kieft said.

“Obviously, on the Web site, you have more possibilities to really tell a story with images, but there will be lots of images in the stores as well to give inspiration. We don’t want to dictate anything. We’re really looking for a customer that has their own style already and who can pick something that fits her style,” Kieft said.

She declined to say which store would be the first to open and when, merely indicating that online sales would follow after the launch of physical stores.

H&M began adding subbrands in 2007 with the launch of COS, which stands for Collection of Style. In 2010, it bought Fabric Scandinavien AB, the company behind hip denim label Cheap Monday and contemporary fashion chains Weekday and Monki.

Neil Saunders, managing director of U.K.-based retail consultancy Conlumino, said that while H&M continues to lag behind its rival Inditex in terms of subbrands, the launch of & Other Stories will help it reach a wider potential audience.

“Strategically, they have taken a step up and they’re becoming much more like Inditex in terms of having a stable of brands which they can roll out across different locations for growth,” he said.

“That’s important for them, because relying on the core H&M brand for growth was never an option, because it’s becoming much more saturated and also there’s a danger it becomes a little bit ubiquitous as well, and it can’t serve all constituents of the fashion market,” he added.

Saunders noted that & Other Stories was launching in locations with significant footfall, strong fashion credentials and high visibility.

“Although the economies overall are sluggish, the locations they’re opening in are high-growth locations, so actually, they should be relatively insulated from the general downturn,” he said.

“By choosing these locations, they are giving themselves a lot of exposure. That said, of course, they’re much more expensive locations, so they’re going to have to make sure that the volume side of the business really stacks up. It’s very important therefore that the product is desirable and seen as being ‘must-have,’ so it can justify the price point and also sell through in enough volume to make the business work,” he concluded.