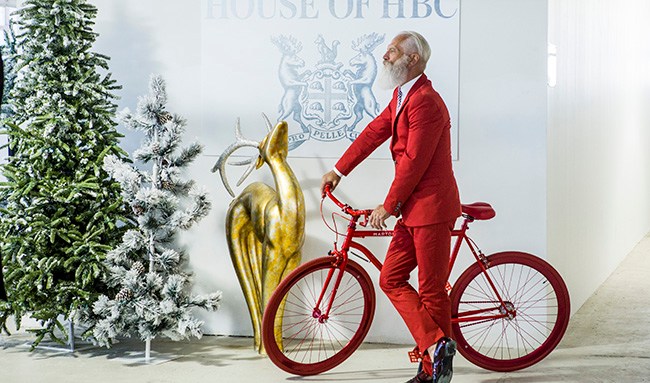 For holiday, fashion retailers have “weatherproofed” their assortments.

They got burned last year by the freakish warm winter causing oversupplies of outerwear and cold-weather accessories, heightened markdowns and reduced margins. So for holiday, shifts in the merchandising are apparent. There’s greater emphasis on items and categories where selling trends aren’t so susceptible to weather conditions, like tech gadgets and wearables, Fitbits, headphones, housewares and “giftables” like candles, picture frames, games and candy.

On the apparel side, styles versatile enough to wear day into evening; layering sets and fabrications that transition from one season to the next; jewelry, sunglasses, watches and ath-leisure, and exclusives, are key. Retailers are also elevating special services like monogramming and customizing products with emojis and appliqués for greater personalization and whimsy. That’s not to say there won’t be ample presentations of kitschy Christmas sweaters as well as classic cashmere styles, wool beanies, down jackets and men’s shirts and ties.

Overall, retailers are playing it conservative, keeping inventories tight and seeking small, single-digit sales gains to approximate last year’s results. Retailers on average achieved a 3 percent gain in sales to reach $626.1 billion during the November-December period, according to the National Retail Federation.

“Now is the time when everybody is focused on how to execute the holiday season. How am I going to set the product? How am I going to promote? What’s my approach to loyalty programs to reward shoppers? And how do I want to plan labor in the stores, to make sure the labor lines up with promotions, the day of the week and the time of the day,” explained Keith Jelinek, leader of the retail performance improvement practice of the Berkeley Research Group consulting firm. “These are high-level decisions that retailers will be focused on for the next 90 days.”

“This Christmas will reflect a lean-and-mean approach with strong emphasis on inventory management, engineered merchandise promotions, product scarcity and being able to react to bestsellers and chase business. Gluts of merchandise and huge clearance problems will be avoided,” said Arnold Aronson, managing director of retail strategies at Kurt Salmon. “The race to the bottom in terms of low price is going to have to start to be reversed. Sales growth must be profitable growth.”

Mark Cohen, director of retail studies at Columbia Business School, said fourth-quarter business “will likely be driven on the basis of price rather than the intrinsic appeal of the merchandise itself, and any retailers that come up with some cool products will likely be trumped by an Internet provider.” He said any retailer that aggressively builds inventories probably won’t be rewarded for that. Doing just the opposite — keeping inventories tight — heightens the risk of running out of merchandise and losing sales, but retailers benefit by getting full margin on the sales, Cohen said.

According to one top executive at a specialty chain, “I just get the feeling that people are really feeling holiday isn’t going to be great, and pulling back inventories to be more in line with the sales trends. There’s a sharp pencil toward expense, and inventory is always at the top of the list.”

One supplier to major retailers, when asked how retailers have planned for holiday, said, “They are feeling a little better about business, but they’re still conservative. Gifting is key.”

The mood is improved because inventories are in better shape; there’s not likely to be a repeat of last winter’s warm weather marked by record-high temperatures on the East Coast, and there could be pent-up demand for fashion which should improve as hard lines, like autos and Apple products, continue to slow. Also, there have been many store closings so remaining stores should benefit, and the presidential election will have past.

Maurices, a division of Ascena Retail Group, for holiday will emphasize layering, statement necklaces, velvets, embellishments, patterned sweaters, print mixing, sweater-vest sets; handbags with tassels, and lots of gifting items under $25. Officials said versatility is key, such as a dress that can be worn at work and for an event that night, by switching the blazer over a dress with a fur vest.

Neiman Marcus has pumped up its holiday array of tech gadgets, among them a pen and notebook set that automatically transcribes into a personal computer device and water bottles that indicate how much is consumed via cell-phone message. For kids, there’s a turtle mailbox that prints out messages and photos sent by an e-mail. The assortment also includes calf-hair sneakers from Maison Margiela. Socks and bow ties are expected to be big holiday sellers, and lace-up is seen as an important trend across apparel, shoes and boots, with Neiman’s showing AG leather lace-up pants, Rag & Bone velvet lace up pants, and over-the-knee lace-up Stuart Weitzman velvet boots.

Lord & Taylor is setting up three gift-giving “destination” shops, one for kitschy sweaters, suits and socks; a “cult” shop for gifts like vinyl records and classic board games such as Monopoly and Scrabble; and a third shop focused on tech products. All told, Lord & Taylor will have 190 exclusive items across men’s, women’s, children’s, accessories and intimates, including a sequined T-shirt dress from Michael Kors and a Nanette Lepore embroidered silver-sequined shift.

At Saks Fifth Avenue, “There is a lot of novelty, many exclusives and a focus on gift-giving,” said Roopal Patel, fashion director. “Saks merchants have been developing exclusive products with designers. Gucci, Fendi and Brunello Cucinelli have all developed incredible product for us,” among other designers. Saks has a wide range gifts from $35 fragrance crackers to a $7,500 diamond-encrusted watch from Bulgari.

Gilt, a division of Hudson’s Bay Co. along with Lord & Taylor and Saks, has a focus on its Gilt City experiences, like helicopter rides, spa visits and workout classes merchandised with workout gear.

“Wouldn’t it be great if a department store created a pop-up shop of the most sumptuous, desirable, must-have items, and it doesn’t have to be about price or what’s most expensive,” said Susan Sokol of the consulting firm bearing her name. “Let’s have products that are really tempting, that tap into the imagination and create a festive mood. A beautiful cashmere scarf, a gorgeous evening bag, a great knit top with fur or faux fur, great technology items, delicious candies — a potpourri of gifts and items that you want to treat yourself to,” not just give as gifts. “It’s the holidays. People buy gifts for themselves, too. There is enough product out there that retailers can be selective and have proprietary merchandise. There are lots of things they can do.”

According to the results from a Berkeley Research Group survey of 1,000 men and women in low-, medium- and high-income brackets, consumer retail spending may continue on its current trajectory and result in mediocre sales increases, not unlike the last few years. “Despite a generally optimistic tone among shoppers when evaluating their personal finances, there is little indication from our survey results that consumers are ready to open their wallets and splurge,” said Jelinek. Fifty-seven percent said they expect to spend the same as last year and 19 percent expect to spend less. Just 15 percent expect to spend more than last year.

The survey points out that many people feel “underemployed,” meaning they’re earning less since the Great Recession, and that consumers will enter the holiday season more leveraged than they have in recent years. When Berkeley asked shoppers why they expected to spend less on holiday gifts in 2016, 30 percent cited rising household expenses, 27 percent said their income had gone down, and 25 percent said they had too much debt. The survey was conducted online from June 23 to June 26 with 500 men and 500 women all over 18 and employed.
What can retailers do to stand out from the crowd and bolster holiday sales? Berkeley suggests “reigniting” loyalty programs, localizing the assortments, and accentuating visual merchandising and displays. Berkeley is also encouraging retailers to try to improve store planning and execution and transform the shopping experience to resonate better with shoppers, though those are tall orders.