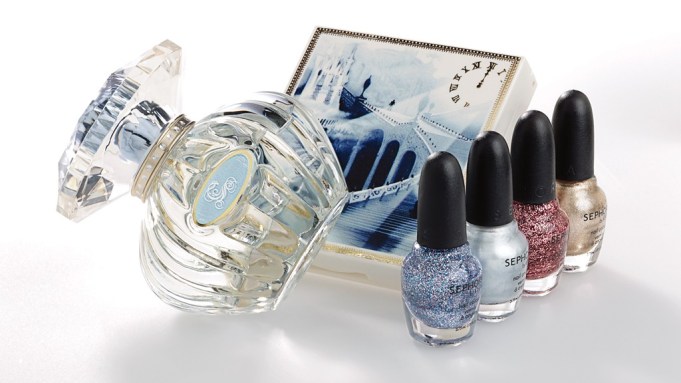 Traditionally, holiday sales results set the tone for the coming year in the beauty industry. Judging from the fourth-quarter catharsis, 2013 could be another cliff hanger.

The beauty industry finished last year with a respectable performance — up 5 percent in the prestige market for the crucial fourth quarter — but not before undergoing a tough slog through December.

Christmas, which fell on a Tuesday in the fifth week of December, emboldened many consumers to procrastinate during the final shopping days, leaving retailers twisting in the wind about how they would ultimately fare. A surge of last-minute shopping saved the day and season, which got a slow start as news of the fiscal cliff, Hurricane Sandy and the Newtown, Conn., shootings weighed heavily on consumers’ minds. Momentum picked up at the tail end of the season, with a number of retailers reporting that Monday was the busiest day.

Several retailers — particularly in the prestige channel — reported they were happy to greet 2013, after what they described as a ho-hum holiday.

The season’s mixed results were not enough to put a damper on positive sales gains across both the prestige and mass channels.

Total U.S. prestige beauty sales gained 7 percent to $10.2 billion for all of 2012, compared to the prior year, according to data from The NPD Group Inc., which held its off-the-record Hot Off the Press industry briefing, hosted by Cosmetic Executive Women Inc., at the Harmonie Club Thursday evening. By category, skin care rose 10 percent, makeup gained 7 percent and fragrance staged a comeback at 5 percent. Prestige sales continued to outpace mass beauty, a trend which will likely continue through this year, according to NPD. In the food, drug and mass channel, beauty sales gained 3 percent to $21.2 billion, with makeup and skin care up 5 and 3 percent, respectively, and fragrance down 4 percent, according to Symphony IRI Group. IRI noted that in national chain stores, fragrance sales increased 7 percent.

The 5 percent increase in prestige for the fourth quarter exceeded dire predictions earlier in December. But the happy ending hung by a thread, since the bulk of the season’s increase stemmed from the final two days before the holiday and the week that followed. According to Karen Grant, vice president and senior global industry analyst at NPD, the results “tell us how precarious the business is” and points to the need to entice consumers to start shopping earlier with activities and other inducements. “[Consumers] are waiting later and later,” she warned. The good news, said Grant, is that “the consumer is still spending, she is looking for things to buy and there’s a lot of opportunity.”

Another bright spot is that direct-to-consumer channels (TV shopping and the Internet mostly) were up 33 percent for the fourth quarter for total prestige beauty.

Despite the storybook ending, December was scary. Grant said the prestige fragrance business, which is 50 percent of the month’s beauty sales, was down every single week in the final month, leading up to the fifth week, when the business began to explode on Sunday and Monday. Grant said she originally predicted a mediocre 2 to 3 percent increase for the fourth quarter, based on a national mood that was a stream of bad headlines. But the 5 percent fourth-quarter increase was driven by gains in all three categories.

Bloomingdale’s achieved an increase for the holiday season, although the size of the gain was not specified. “While not as strong as we had hoped, we had a good December and we’re having a good January,” said Howard Kreitzman, vice president and general merchandise manager of cosmetics and fragrances. Noting that fragrance was a bit stronger than beauty, Kreitzman said, “Those brands in cosmetics and fragrances that performed well throughout the year performed well in December.” He listed the standout fragrance brands as Chanel, with the new Coco Noir doing well; Hermès; Viktor & Rolf’s Flowerbomb, and Tom Ford’s Private Blend. The top brands in the cosmetics department were La Prairie, Sisley, Dior, Chanel and Giorgio Armani.

Kreitzman said it is too early to make predictions on the year, but “January has been good.” He noted that the spring season offers “many pockets of opportunity” for brand expansion into more doors.

At Saks Fifth Avenue, candles, fragrances and gift sets attracted shoppers’ attention. “This year we saw the continuing trend of scented candles as a gift that resonates with our customer’s holiday list,” said Deborah Walters, senior vice president and general manager of beauty at Saks Inc. “Our specialized lifestyle fragrances were also popular. Brands whose unique stories come to life — such as Bond, Killian, Penhaligon’s — all performed well. Personalized gift sets such as those from Chanel, Jo Malone, Kiehl’s and Sisley are always popular, as well as the luxurious special edition skin-care items and sets from La Mer and La Prairie.”

“Makeup palettes maintained their momentum, showing measurable growth year after year,” said Margarita Arriagada, senior vice president of merchandising for Sephora. “Fragrance rollerballs continue to be a big success for us as well, and this holiday season’s Sephora Fragrance Favorites kits were among our top-selling items. Also, ‘mega’ gifts, like the Sephora ColorDaze Blockbuster and the Ciate Blockbuster set we carried exclusively this season, were extremely sought-after by our clients.”

Make Up For Ever, another Sephora exclusive, reaped “strong double-digit” comparable-store increases at its five boutiques within Sephora and the overall wholesale business, said J.P. McCary, general manager of the Americas. He added the two branded stores that opened last year in Dallas and Los Angeles were on plan.

“The fourth quarter was great for us,” McCary said. “We made some changes to the store services and layout to make it easier to shop and added new educational elements that proved to be very successful.”

The company had a “big pickup” in gift set sales that he attributed to a three-tier pricing strategy. The top seller was a holiday edition of its $79 HD Complexion Starter Kit that held a primer, brush and a gift card for foundation.

In the mass market, beauty performed better than expected at chains such as Target, Wal-Mart and Walgreens. Retailers reported that the average transaction in the category was up over 2011, led by gift sets, product innovation and the explosive nail category. “Beauty as a category started out strong from the beginning,” said Joe Magnacca, president of daily living products and solutions at Walgreen Co.

“Throughout 2012, categories such as nail polish and new skin-care technologies were popular among our customers,” added Shannon Curtin, Walgreens’ divisional vice president and general merchandising manager for beauty, personal care and seasonal. “Overall, beauty customers were more adventurous and tended to purchase items that were innovative and provided multiple benefits, such as BB creams. Walgreens collaborated on several new product lines this past year including the Wet ‘n’ Wild Fergie market launch.”

Store checks to Ulta, Walgreens, Rite Aid, Target and Wal-Mart immediately after the holiday revealed some very strong sell-throughs, especially in nail and fragrance gift sets. The latter was welcome news since the category has lagged for the past five years in drugstores and discount chains. The biggest success, across the board, was the nail-care category across polish, nail dresses or the newly popular gel kits.

“We are excited to see continued growth in the nail-color category,” said Carmen Bauza, Wal-Mart U.S.’ vice president of beauty and personal care. “Nail color is a very hot trend and is resonating well with our customers. We expect to see this trend continue and have broadened our assortment to include nail color items from $1 to $8.50, ultimately providing our customers with good, better and best options.”

Beyond nails, the overall cosmetics category contributed to increased beauty sales, according to retailers. Wal-Mart’s Bauza said, “Our shoppers love color, especially when it comes to eye shadows. Hard Candy, one of our exclusive brands, launched a 10-shadow palette for $6 and it’s one of the top items in the eye shadow category. ” Bauza added that hopes are high for Drew Barrymore’s Flower cosmetics line, a Wal-Mart exclusive developed with the Maesa Group. “Flower is the premium cosmetics line our customers have been asking for,” said Bauza of the range, which launches later this month.

At CVS, the categories that saw the strongest growth in 2012 were cosmetics, especially driven by the “very hot” nail category, according to Cheryl Mahoney, vice president of beauty for CVS/pharmacy, adding, “We also saw growth with facial skin care, hand and body lotions and pro salon hair care. When it came to fragrances, Mahoney said CVS “saw a lift” during the holiday season, naming some top celebrity launches as Taylor Swift and Justin Beiber.

Another top drugstore merchant, who requested anonymity, said, “Fragrance did great Sunday and Monday prior to Christmas.” Some of the classic fragrances emerged as stars this year, supplanting many of what buyers called some “tired” celebrity brands. Chains promoted buy one, get one 50 percent off in fragrance and did so earlier than in other years. Duane Reade offered a glossy Beauty Book with fragrances, such as Stetson gift sets at $9.99.

A further testament to how beauty propelled the season was the dramatic sales growth at Ulta. Total sales for the seven-week holiday period were $475.6 million, a 23.2 percent increase from the prior-year holiday period’s sales of $386 million. Comparable-store sales for the 2012 holiday period increased 7.4 percent, on top of a 12.6 percent increase during the same period in the prior year. “We were pleased with our holiday sales performance given the numerous national news events that appeared to have curtailed customer purchasing behavior across most of retail. After a record sales performance during the Black Friday and Cyber Monday weekend, sales in December slowed before strongly rebounding the weekend before Christmas,” said Chuck Rubin, Ulta’s president and ceo. “Customers were more sensitive to value as they shopped our stores and online throughout the holiday period. We believe we gained market share across our major categories, with prestige skin care and cosmetics delivering our strongest growth. We are confident our strategy will continue to drive market share gains and positions us well for long-term growth.”