Fine jewelry retailers at JCK expect a strong second half driven by women buying for themselves.

By Sophia Chabbott and Marcy Medina on June 20, 2005
View Slideshow 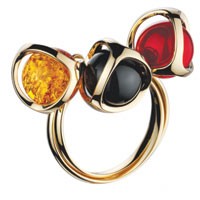 LAS VEGAS — Fine jewelry retailers are expecting a strong second half driven by women buying for themselves.

As the jewelry market continues to grow, jewelers are anticipating double-digit increases over the next six months, helped by the continued boom in demand for luxury goods.

The feel-good mood was expressed by buyers and vendors at the Couture Jewellery Collection & Conference, Luxury by JCK, JCK and the new Signature Salons shows that took place here earlier this month. The shows are harbingers of what’s to come as retailers stock up on merchandise for the crucial holiday selling period.

Fine and costume jewelry have had a particularly strong year. Fashion designers have been featuring jewelry in large doses on the runway, and women are accessorizing the current ethnic and bohemian apparel trends with layers of necklaces, earrings and bracelets.

Styles at JCK enforced the trend of personalization, with women looking for unique details in perfect pieces for themselves as opposed to more generic or simple styles.

Mark Udell, chief executive officer of London Jewelers, said, “People are out there spending. They want to be good to themselves.”

Tim Greve, president of Carl Greve Jewelry and Timepiece Collections based in Portland, Ore., expects a very profitable holiday season due to a mélange of new ideas and emerging designers. Greve cited the influx of men’s jewelry into the market, including the David Yurman men’s line, as well as the popularity of rose gold.

“[Rose gold] is finally starting to get more inroads in the U.S. market,” he said. “Since yellow gold has been strong in the U.S., it is paving the way for pink gold to be accepted by the customers.”

Lauren Kulchinsky, buyer and vice president at Mayfair Jewelers, projected a 20 percent growth in sales, but others remain more cautious about the second half. Jim Rosenheim, ceo of the Tiny Jewel Box in Washington, D.C., said that after experiencing a 19 percent increase in 2004, he planned for a modest 5 percent increase this year.

“We are still 19 percent over last year so far,” Rosenheim said. “We’re seeing strong, consistent business, and I don’t see it abating.”

Sue Anne Newberg, vice president and divisional merchandise manager for fine jewelry and watches in the U.S. for Saks Fifth Avenue, said she sees the jewelry market growing, but at a much slower and steadier pace. “I do feel it will be a strong holiday season, but I don’t think it will be over 10 percent [for the year]. I’m not having double-digit growth,” she said.

Newberg said one trend helping to fuel growth of the market is the increase of women purchasing items for themselves in the $2,000 to $5,000 range at retail.

“There’s a need for the contemporary customer to accessorize with jewelry,” said Newberg. “They are finally understanding that they need a whole look. With boho chic, you see the comeback of yellow gold. It’s not necessarily about the high-priced things. It’s more about the self-purchase pieces.”

Saks is one company that has been targeting what the buyers call the “modern contemporary customer.”

“It’s not necessarily an age group, and it’s not just an attitude,” general merchandise manager Jennifer DeWinter told WWD in May. “[This customer is] looking for what’s new in fashion, a new resource. [She is] not as brand-loyal [as other consumers].”

Janet Goldman, founder and ceo of Fragments in New York, also has seen an increase in women who are purchasing for themselves.

“Our customer has always been a self-purchaser, but she’s going higher now. It’s aspirational,” she said. “We have a price point that’s a sweet spot in the market. The designer-driven [styles] are good for that market. People are feeling happy and more relaxed. They know what they want.”

Candy Udell, president of London Jewelers, agreed. “When people buy a $2,000 handbag, they realize that they can have jewelry that will last forever [in the same price range],” she said.

Tom Andruskevich, ceo of Birks and Mayors, based in Canada and Florida, respectively, said many women who are buying for themselves want day-into-evening looks.

To cater to these female customers looking for fashion jewelry, many retailers at the show were seeking signature pieces from lesser-known designers.

Sydney Price, vice president and divisional merchandising manager of jewelry and watches for Bergdorf Goodman, said the store is experiencing double-digit sales increases and plans to increase its jewelry selection. Price said collections by Cynthia Bach, Cathy Carmendy and Loffredo were standouts at the shows.

Price added that since there is a lot of duplication in the market, it is critical for designers to focus on unusual concepts and limited distribution.

Discovering new and inventive designers with limited distribution is part of Barneys New York’s strategy for its jewelry department, which has a reputation for catapulting such designers to fashion stardom.

“We have taken time to build small jewelers,” said Sarah Blair, vice president and divisional merchandise manager of accessories. “We have taken chances with very artistically forward-thinking jewelers. We have always kept a craftlike, feminine, modern, emotional aesthetic. We have always been passionate about this department, and so have our jewelers.”

New on buyers’ radar was California jeweler Pade Vavra, whose standout pieces include a necklace of shark’s tooth inlaid with rose-cut diamonds and yellow gold, and toucan earrings of yellow gold dripping with emerald strands. Many buyers also singled out Annie Fensterstock, who is represented by Fragments in New York and shows Moroccan- and paisley-inspired pieces, as a promising new designer.

Scott Kay, ceo and chief designer of the namesake jewelry company based in Teaneck, N.J., presented at Couture and Signature. He introduced a sterling silver and 18-karat-gold collection dubbed Bolo that included amethyst, blue tourmaline and diamonds in its sculpted metal designs.

Kay said he quadrupled sales at the Couture and Signature Salons shows. He added that the company did $4 million in sales of just sterling silver.

Most retailers said they weren’t affected by the strength of the euro against the dollar, but were working with European jewelers who are willing to help keep their margins low.

As for trends, last year’s enthusiasm for yellow gold continued. Gold jewelry sales in the U.S. increased by 4 percent in 2004, reaching about $17 billion, the strongest growth for the category since 1999. This marks the 14th consecutive year of gold jewelry sales increases, according to the annual gold jewelry sales summary conducted by NOP World, a market research firm, and sponsored by the World Gold Council. Colored gemstones also remained prevalent in many looks.

Bold pieces and feminine looks with a modern twist were in the spotlight in several designers’ showcases, as was brilliant yellow gold jewelry with Italian-inspired treatments like hammering, or haphazard and uneven engravings.

“Wearing eclectic jewelry makes you feel like your own designer,” she said. “It’s like the Seventies. It’s a hippie time.”

There were also bold cuff bracelets with edgy filigree and diamond details, and post earrings with a modest drop of a colored cabochon or faceted tourmaline, that were a carryover from the showings in Basel this past March.

Although the fate of the fine jewelry industry remains vulnerable to the runways, where the minimalism that thrived in the Nineties is expected to return, the category is staying relevant.

“There was a good energy on the floor at Couture this year,” said Kulchinsky of Mayfair Jewelers.

Carol Brody, formerly global director of communications at Harry Winston who recently became chief luxury officer of Robb Report magazine, said, “We went from a decade of little accessorizing to a decade of overaccessorizing. Then ‘bling’ became part of the everyday vernacular. Rarity and exclusivity are the key terms in jewelry today. Luxury is about things that everyone can’t purchase. We’re going to see a shift now from bling to individual and important pieces.”