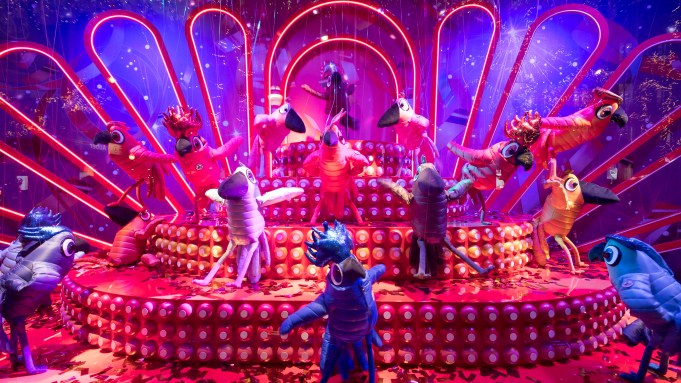 The world can certainly use the cheer that holiday windows provide.

It’s been a fractured and fractious year in many parts, from pro-Independence Catalan demonstrations in Barcelona, the Brexit upheaval in the U.K., U.S.-China trade war, and protests — sometimes violent — in Italy, Paris and Hong Kong disrupting and impacting economies and retail sales.

Now that the holiday season has arrived, retailers’ windows can be a soothing balm for the world-weary shopper.

Saks Fifth Avenue spared no expense to transport shoppers to “Frozen 2’s” kingdom of Arendelle. Before the curtain lifted on the flagship’s windows, Idina Menzel, who is the voice of Elsa, sang “Show Yourself” from the movie sequel, as characters from “Frozen 2,” including crowd favorite Olaf the snowman, frolicked in the street. “This is our gift to New York City, of course for those who live here, but also those who visit us throughout the holidays,” said Saks president Marc Metrick. “Tonight marks the 95th holiday window unveiling.”

Bergdorf Goodman let the good times roll with windows depicting a game of musical chairs with Art Deco-style visuals; a card game set in an enchanted sculpture garden amid a menagerie of animals; a pinball machine with psychedelic animations; retro slumber party in a rumpus room; glittering bejeweled game of chess; an elaborate board game fantasy inspired by a day at Bergdorf’s, and a scavenger hunt with a frenetic array of oversize objects, ornaments and trinkets.

Bloomingdale’s holiday window theme harkened back to a more innocent time: the lunar landing 50 years ago, albeit with some high-tech twists such as an interactive voice-controlled Google window in a domestic holiday setting. Flying saucers, visions of the galaxy, robotic arms playing instruments on a distant planet, and seasonal in-store experiences embracing space exploration serve as “a wink to the past and a reflection of Bloomingdale’s commitment to the future,” said Tony Spring, Bloomingdale’s chairman and chief executive officer.

The windows of the Macy’s Herald Square flagship took shoppers on a journey with Santa Girl as she embraced the spirit of the holidays. The scenes, made from materials such as lacquer, chromed parts, LED lights, and 3-D objects, were unveiled following a fireworks display and visit from Santa’s elves as part of the retailers Believe in the Wonder-themed holiday displays.

The absence of Lord & Taylor‘s holiday windows was felt this year. The 100-year-old retailer since 1937 had been creating beautiful dioramas at its Fifth Avenue flagship, and in 2018 unveiled its final display. Barneys New York‘s holiday windows, which mixed satire, social commentary, activism, art and fashion and resonated with shoppers on many different levels, now feature Going out of Business sale signs since the retailer was acquired in bankruptcy court by Authentic Brands Group.

Retailers abroad each had distinct takes, as well.

Galeries Lafayette’s windows, decorated with oversize bees, in keeping with the beehive-themed display, feature colorful, stylized flowers. A profusion of gold in the windows mirrors the decorations on the huge Christmas tree beneath the historic retailer’s stained-glass covered cupola, and topped with a fairy-like queen bee with flapping wings.

Le Bon Marché Rive Gauche created a childish universe in windows, which involve a journey to the forest to discover king trees. Hint: they wear neon crowns. On to the second floor, where a room is unmistakably decorated with children’s decor, and bushes overflow with toys, balloons and colorful candy, wild animals, and a taste of the Orient.

At Italy’s the Mall Luxury Outlets in Florence and Sanremo, event designer Vincenzo Dascanio created a Christmas fairytale about a girl named Flò and her dog Pepè that unfolds with a series of installations at the expansive Tuscan outlet village, while at the the Sanremo location in the Liguria region, The (Un)Traditional Christmas finds embellished fir trees and copious light installations marking not only the festive season, but also the opening of four new stores: Alexander McQueen, Saint Laurent, Bottega Veneta and Jimmy Choo.

Milan’s Rinascente luxury department store is celebrating San Gregorio Armeno, a historic street in Naples known for local artisan ateliers specializing in handmade figurines for nativity scenes. It partnered with three ateliers to embellish its arched windows overlooking the city’s iconic Duomo cathedral, and for installations of moving statuettes and rich nativity scenes. Larger-scaled statues of popular local actors and personalities were hung in between each window, offering selfie-opportunities.

The purple and green hues of the Northern Lights have been making nightly appearances at the London’s Harvey Nichols in Knightsbridge. They’re not the only nod to Scandinavia. The fifth floor Canvas space has been transformed into the The Secret Forest, a cozy, mystical experience offering ice-cream cocktails, Scandi-inspired foods and screenings of holiday classics such as “Home Alone” and “How the Grinch Stole Christmas.”

All Harvey Nichols stores in the U.K. and Ireland feature a Scandinavian aesthetic and rustic details such as cedar slat panels draped with garlands evoking the Nordic night sky.

Selfridges’ “A Christmas for Modern Times,” which was more than 500 hours in the making, reimagines fairy tales such as “Rapunzel” and “Cinderella,” and can be seen at all stores and online. In an icy tower, giant Simone Rocha pearl hair slides adorn Rapunzel’s platinum locks, while Cinderella wears a Christian Siriano dress of fantastical proportions. Festive snow globes filled with biodegradable confetti can be seen at Selfridge’s Oxford Street location, along with a light show takeover of the the mirrored Christmas tree hanging in the central atrium.

Harrods is taking customers on the journey of thoughtful gift giving. Inspired by children’s novels, where animals become figures of magic and escapism. The Knightsbridge windows features a selection of penguins, bears, owls and tigers surrounded by gifts. Harrods this month launched a stylized Moncler ski lounge.

Harrods also partnered with Immersive Augmented Reality for an app with a Christmas-themed journey of the store, including makeup master classes in the new beauty halls, chef demos, pop-ups and a button bar for customizing Balmain items and Tiffany & Co. outpost.

The concept of “The BIG Holiday,” brought to life by BIG–Bjarke Ingels Group, embraces the social spirit of the holiday season by creating the world’s longest Christmas ribbon that threads from the adjacent Phloen Chit BTS station into Central Embassy, morphing twisting and twirling to create different social spaces and programs — and an invitation for interaction, play and dialogue between friends and strangers.

K11 MUSEA, Hong Kong’s Silicon Valley of Culture, unveiled “Galaxy of Creativity,” by artist Stefan Beckman, who is known for designing the sets for Marc Jacobs’ fashion shows. “Galaxy of Creativity” is just as theatrical, sparkling on the rooftop of the Bohemian Garden. It’s immersive, too, accompanied by a series of programs geared to help visitors find their muse through the power of creativity, culture and innovation.

The work of 13-year-old artist Elisabeth Anisimow, “Living Art,” the tale of Donut and his friend Ah Meow, can also be seen at K11 MUSEA. Anisimow’s style combines illustration and photos of costume-clad models posed against a painted backdrop that looks a classical painting. The characters look at the night sky through binoculars, but field glasses aren’t necessary to appreciate Anisimow’s work.

South Korea’s Hyundai Department Store erected enormous Christmas sculptures at each of its stores. A nearly 50-foot high Santa Claus stands sentry in front of Hyundai’s Trade Center store in Seoul. The retailer got its own Christmas present; it was awarded the license to operate a duty free store in Dongdaemun by the Korea Customs Service. Hyundai has operated a duty free store the Trade Center branch since 2018.