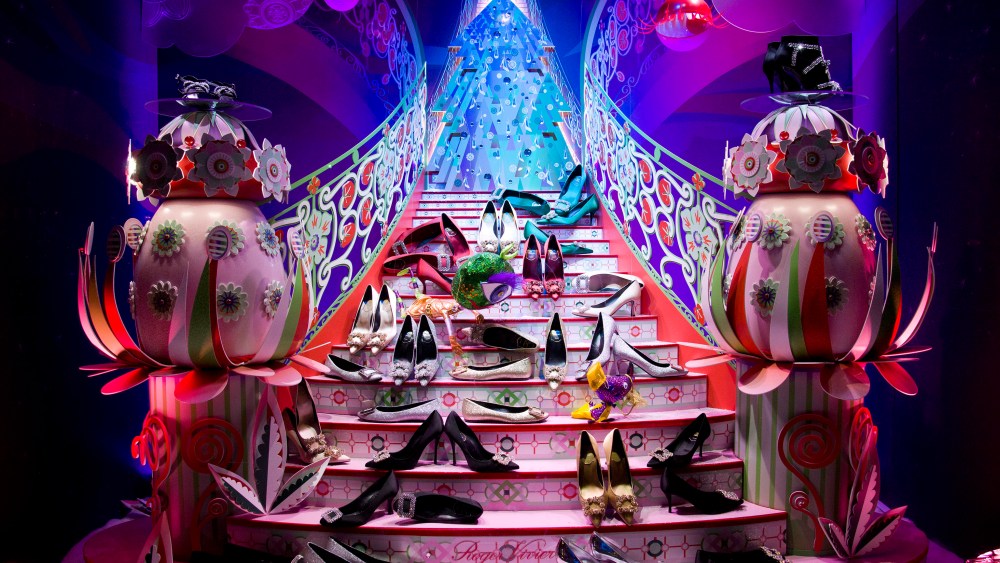 Fantastical journeys, classic children’s stories and newfangled tales feature in the holiday windows of retailers from Manhattan to Macau.

At Printemps, Paris Jules and Violette, the retailer’s recurring holiday mascots, are sent on a hunt for Santa Claus visiting the desert, Antarctica, the bottom of the sea, and mushroom- and flower-covered terrain with flapping butterflies. When Jules is spirited away by a giant insect, Violette, wearing a Sherlock Holmes-style cape, waves a magnifying glass looking for clues. When the windows were unveiled, special guest Laetitia Casta wore a diamond-encrusted Boucheron fern necklace.

Animated puppets take to the stage at Myer with Lewis Carroll’s “Alice in Wonderland”-themed windows. Based on the 2015 Hodder 150th anniversary edition illustrated by French artist Rébecca Dautremer, the scenes took 40 artisans 12,000 hours to complete. David Jones also goes with a children’s classic — nod to Disney’s “The Nutcracker and the Four Realms” — while Scentre Group, which operates Westfield Sydney, installed at its flagship property a mini forest of replica Australian gum trees festooned with Christmas lights along with a vertical holiday village made from gift boxes topped with white cockatoos.

At Macy’s Herald Square in Manhattan, a tale of friendship, family, adventure and teamwork unfolds in six windows as Sunny the Snowpal works to save Christmas, befriending a fox along the way. That fetid green monster, The Grinch, has been holed up at Bloomingdale’s 59th Street flagship on loan from Illumination and Universal Pictures, whose animated film “The Grinch,” starring Benedict Cumberbatch, is a holiday hit.

Bergdorf Goodman‘s windows provide cravings-worthy sweet, gilded treats, everything from a gingerbread cuckoo clock, whose timekeeper is prone to wander from her enormous chalet, to a peppermint-hued hallucinogenic dream featuring a candy cane wizard. Speaking of dreams, Saks Fifth Avenue depicts a shopper’s visit to the theater, where instead of watching the show, she dreams of the retailer.

Barneys New York takes the lowly penny to greater heights with its Making Change theme, presented by the Barneys New York Foundation. The campaign, in partnership with Save the Children, invites guests to create some currency during the holidays, including using the hashtag #centiments, which results in a $5 donation by the foundation to Save the Children for every post.

Galeries Lafayette in Paris also envisions a reverie with La fabrique des Rêves, or manufacturer of dreams, featuring characters imagined by children: benevolent monsters, furry dinosaurs and creatures with a single eye cavorting in a world of pink and white gift boxes, pastel cakes and steps lined with shoes.

Le Bon Marché’s Bon sapin, or good tree, theme focuses on Christmas trees, outfitting them in ballet shoes in one window, and turning them into a marching band in another.

Retailers toast the holidays in high style, with high spirits. Harvey Nichols, London pops the cork of a giant bottle of bubbly unfurling gold and silver ribbons and baubles as a mannequin ride on the bottle’s neck. Harrods serves up a traditional feast of turkey and fixins’ with handcrafted oversize brussels sprouts among the eats.

Liberty London’s animal etchings on pillars and panels are a well-known part of the decor. The creatures appear in windows as two-dimensional black-and-white cutouts. Selfridges’ “Santa on Tour” has St. Nick hitting the road and rocking a sequined red jumpsuit and star-printed emerald overcoat designed by Dilara Findikoglu, Gieves & Hawkes, Walter Van Beirendonck, J Brand and Shrimps and Halpern.

Isetan and Mitsukoshi, Tokyo, mark the last Christmas of Japan’s Heisei period; the current emperor plans to abdicate in April, which will mark the beginning of a new period. Isetan creates a retro vision of the future featuring a rocking horse and snow globes cavorting with reindeer aided in flight by jet packs and Santa in a motorized sleigh. Takashimaya’s Nihonbashi district store appeals to kids with mini carousels, model train and Ferris Wheel surrounded by plush animals and tempts adults with yummy-looking foods.

At Harbour City, Hong Kong, shoppers who donate to the Hong Kong Blood Cancer Foundation can take a selfie with a giant video kaleidoscope where LED screen walls are filled with snowflakes, stars and rainbows. Joyce’s holiday decor is a bit odd, “The Wizard of Oz” crossed with “Stranger Things,” which manifests itself as an upside-down Emerald City topped by a right-side-up Indiana cabin. Another topsy-turvy display — an inverted 50-foot Christmas tree — can be seen suspended from the ceiling of the lobby of the Parisian Macao.