The teen brand and DoSomething.org are encouraging students to express positivity to drown out bullying.

Hollister, the teen-oriented casual fashion brand, and DoSomething.org, which mobilizes young people to work for social change, have teamed up on a “Cancel Bullying” campaign.

The effort involves encouraging students to distribute “affirmation” tear sheets in schools bearing positive messages that help eliminate negative feelings associated with being bullied. Students across the country will print and post the tearsheets, which have been designed by Hollister.

“Research shows that one in four students are bullied and it’s probably higher when you think of social bullying,” said Michael Scheiner, senior vice president of marketing for Hollister. “Of any generation, Gen Z is the most accepting of diversity. It’s encouraging that this generation is so focused on acceptance. This is a great cause for us to tap into. The campaign is all about encouraging this generation to take action into their own hands.”

Working with students on design input, Hollister created two long-sleeve, printed T-shirts, priced at  $24.95, and $25,000 of the shirt proceeds will benefit the cause.

“It takes five positive comments to make up for every one negative comment,” said Scheiner.

DoSomething.org mobilizes young people in the U.S. and 131 countries by signing up volunteers for civic actions and social causes, including clothing homeless youth and sports equipment drives.

“Going back to school is difficult enough, students shouldn’t have to worry about bullying, too,” said Carrie Bloxson, chief marketing officer of DoSomething.org. With Hollister, “We’re drowning out bullying in schools across the country by activating students to create a culture of support and positivity among their peers.” 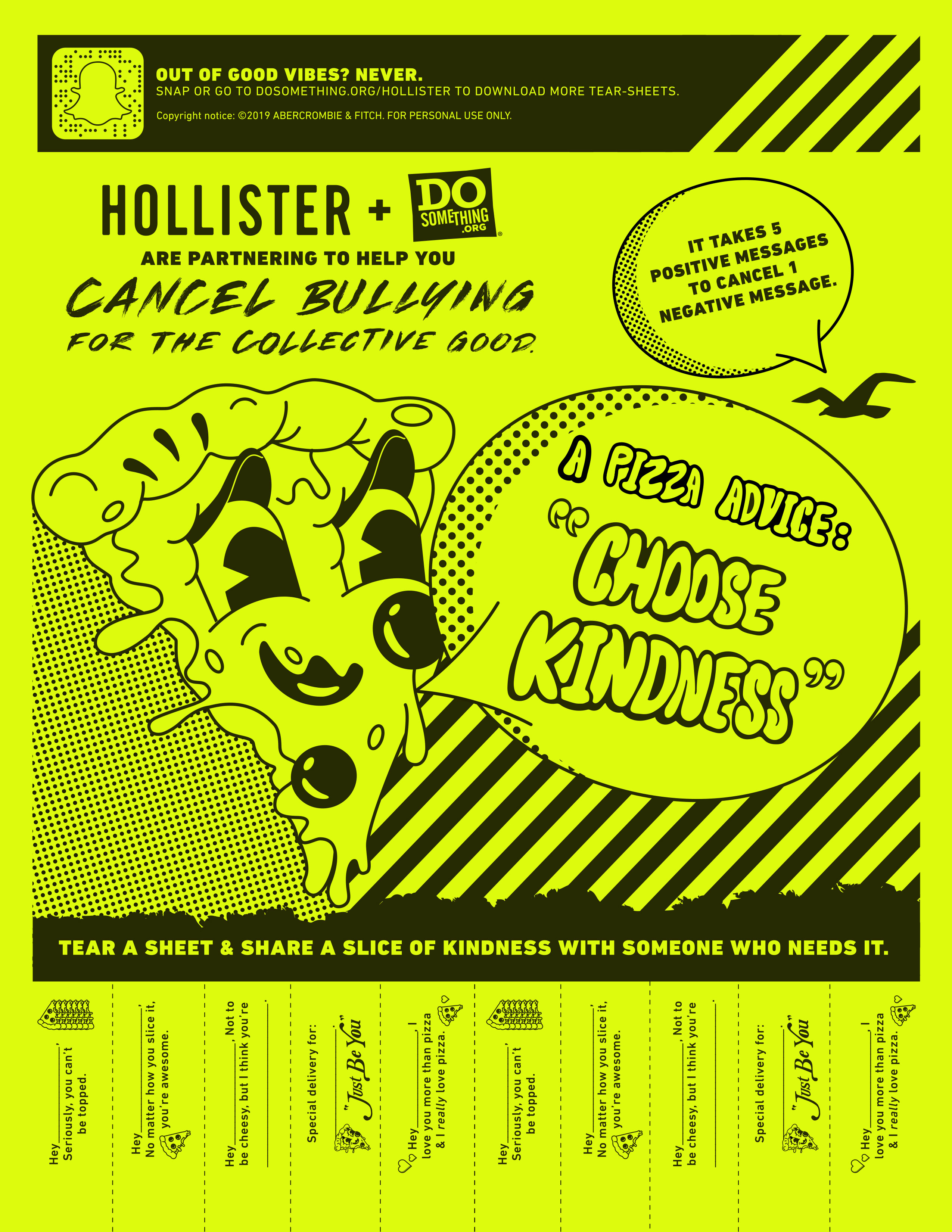 A tearsheet from the Cancel Bullying campaign.

Aside from selling the T-shirts, the campaign is supported by Hollister stores with in-store videos, large photos, and printed tearsheets by cash registers. Also, there’s “rounding-up” at the registers whereby you can donate the change from your purchases to DoSomething.org.

Influencers like Anika Alexa, a model, philanthropist, and public speaker, and Micaiah Ransby, a college track athlete and body positivity advocate, will be contributing custom tearsheets to the campaign with their own five personal messages of positivity and affirmation, to further the campaign’s Cancel Bullying message for young people.

Students can sign up for “Cancel Bullying” at DoSomething.org/Hollister, or by texting FIVE to 38383, to download and print tearsheets with messages of positivity and affirmation. Students who participate in the campaign by Nov. 1 will be entered in a contest for a $5,000 scholarship. The school with the most students completing the campaign will be given a pizza party hosted by DoSomething.org.