Holt Renfrew & Co. elevated the luxury appeal at its Montreal store with a 3,000-square-foot designer department that is restrained, plush and blends a sense of the past with modernity. 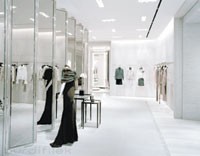 NEW YORK — Holt Renfrew & Co. elevated the luxury appeal at its Montreal store with a 3,000-square-foot designer department that is restrained, plush and blends a sense of the past with modernity.

Holt Renfrew carries designer merchandise at all of its nine stores, but not in the depth seen at the three locations considered flagships — Montreal, Toronto and Vancouver. The 67,000-square-foot, three-level Montreal unit, on Sherbrooke Street, houses the renovated designer shop on its second floor. Holt Renfrew plans to add some new designer resources for fall, including Chloe and Michael Kors.

“It’s a gorgeous couture room in the true sense of a European fashion salon,” said Caryn Lerner, Holt Renfrew’s president. “It pays homage to the building itself, which is a vintage Art Deco building from the Thirties. We wanted to make it a little bit more modern for the products it houses, while trying to be true to the period.”

Diego Burdi, creative partner at Burdifilek, the design firm that created the couture room, described the space as “elegantly restrained, with a subdued classic palette.” It is divided by a translucent mirrored accordion wall that provides an architectural separation between the entrance to the space and the display area.

“The room proper is paneled in sandblasted rift-cut oak, for a very linear effect to the graining,” Burdi said. “We sandblasted it and wire brushed to get a beautiful texture out of the wood, and the floor is customized oak that’s been whitewashed, as well.”

There are also two anterooms with walls lined in leather-clad beveled panels, wool and silk carpeting, a tri-mirror detailed in Macassar ebony and a desk for taking orders that is bleached sycamore wood with mother-of-pearl inlay. There is a ballet bar around the perimeter for hanging product, nickel-plated fixtures and four fitting rooms with paneled walls that are sandblasted, cerused and bleached white oak.

This story first appeared in the June 8, 2005 issue of WWD. Subscribe Today.

Burdi said that, considering the unique character of the building, the couture room would not be replicated at other Holt Renfrew stores. “Everything was completely customized and detailed specifically for this project,” Burdi said. Because of Canada’s small population, Holt Renfrew spends its money on enhancing existing locations, rather than opening new ones. In 2003, much of the Toronto flagship was renovated, including the main floor, by Burdifilek.

Denis Gagnon and Roberta Morales will be creating exclusives.