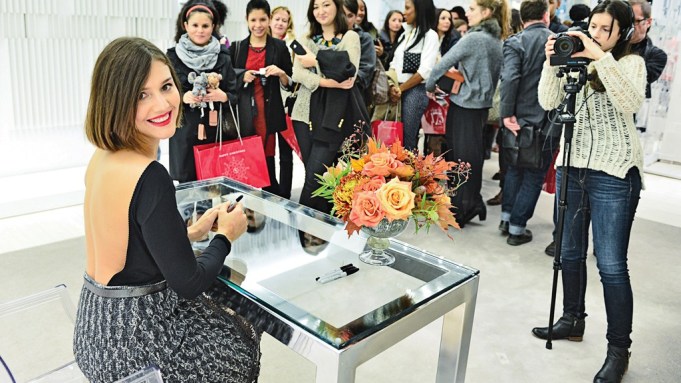 It’s a typical morning meeting at Holt Renfrew’s Bloor Street flagship before the doors swing open to shoppers, and 150 sales associates are getting the skinny on the early spring arrivals to the selling floor.

“When you are thinking about everything you are selling, these should be natural add-ons,” Minuk stressed.

Then she introduced Margherita Missoni, heiress to the Missoni fashion house founded by her grandparents, who thanked the Holt team for supporting OrphanAid Africa, the cause she has embraced for the past decade, since she was 20 and spent a month in Ghana witnessing firsthand the suffering of the children.

At her public appearance in the store later to launch the products and sign autographs, Missoni praised the “extremely professional” in-store and social-media campaign Holt has created to promote the elephants and bears, which she described as “trans-generational gifts, for any age.”

This is just the latest chapter in Holt’s ongoing, two-year-old program of offering $50 exclusives created by top designers to support charities of their choice. Holt donates $100,000 to the charities and only keeps enough of the revenues to cover costs.

The products are multipurpose — they are used as tools to raise funds and bring designers and celebrities into the store to spotlight charities and draw crowds, as well as to enable shoppers to buy something exclusive and feel good knowing that they’re helping to support a cause.

With designers, “We form a collaboration to highlight a charity of their choice, leading to a product sold at a very attainable price,” said Alexandra Weston, director of brand strategy for Holt Renfrew. “It builds a deeper relationship with the vendor, and customers of all demographics can have a piece of this.”

In April, Holt and Tory Burch partnered on $50 totes to benefit the FEED Foundation, cofounded by Lauren Bush Lauren to combat child hunger, and the Tory Burch Foundation, which provides economic opportunities to women and their families in the U.S.

“We’ve always had a lot of great initiatives going on,” Weston said. “We’ve always supported United Way. But when I came on board over a year ago, I really saw a need to create a consistent, concise platform, for all the stores and for the [brand] messaging to stand on. It was a little bit here and there.”

Holt now has “a streamlined strategy that feeds into the ethos of the brand,” Weston said. “It came about by listening to what our employees, our customers and our vendors care about. It sounds cheesy, but we’ve become one big happy family.”

Weston is the wife of Galen Weston, who runs Loblaws and is the son of  W. Galen Weston, chairman of Selfridges Group Ltd., the holding company for Holt, Selfridges in the U.K. and Brown Thomas in Ireland. Alexandra Weston works directly with Holt’s president, Mark Derbyshire.

“My job encompasses looking at the business, determining where there are gaps and holes and where we see opportunities,” Weston explained.

Supporting charities and bringing social issues to the fore is “a big part of what I am focusing on and what we believe in as a brand. We are all about making customers and employees feel great. I saw there was an opportunity to expand upon that element and really reach out, and to enhance our corporate reputation at the same time. It’s become more and more important to the next generation of customers, employees and vendors. We are working on building programs for amazing causes. There are a lot other things coming down the pipeline,” and not too far in the future.

Without going into great detail, Weston did tip her hand on a project happening for next spring. It revolves around an in-store-shop concept featuring a “well-curated assortment of exceptional products,” exceptional in the way they are manufactured, she explained — through artisans, or by utilizing materials that are renewable or organic. The shop will change constantly, and Weston believes it will represent “a new and fresh way to look at retail” with a concept that’s “simple, young, chic and gallerylike, highlighting products and the stories behind them.”

For spring, three pop-up shops will be created, about 250 to 300 square feet each, as “a teaser to get this concept out to the market” and a prelude to permanent 450-square-foot shops at Holt’s flagships in Toronto, Montreal, Vancouver and Calgary.

“They won’t always be about charities,” Weston said. “They could highlight a culture or a craft, artisans,” from anywhere around the world. “We are having a great time scouring the globe for the coolest, most fashionable products.”

As a precursor to the shops, Holt has begun selling in its holiday shops Cornelia Guest handbags made from recycled fabrics that resemble leather.

The working name for the concept is “The Green Room” to evoke ecology, and for where actors stay before they’re about to appear on stage or live TV shows. Events and exhibits are seen happening in Holt’s Green Room.

“The Green Room will allow us to speak to a new generation of consumers who want to know where product is from, and who care about who makes it,” Weston said. “For this generation, it’s expected. It’s something that should always be front and center. For the older demographic, it may not be second nature, but it’s something they are embracing.”