The Canadian luxury department store chain is set to embark on its single biggest expansion ever. 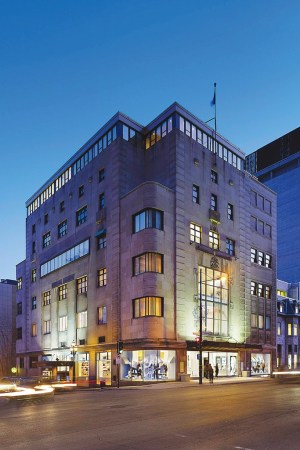 Holt Renfrew is 175 years old, but don’t call it a mature business — the luxury department store chain is set to embark on its single biggest expansion ever.

“You will see 40 percent more Holt Renfrew floor space by the end of 2015,” Mark Derbyshire, president of Holt Renfrew, told WWD. “This is a complete refreshing of our network right across the country.”

According to sources, Holt Renfrew is fast approaching $800 million in revenues and has budgeted more than $300 million for the expansion. Derbyshire would not comment on those figures. Since joining Holt in January 2010, he and his team have combed the retailer’s 10 locations (including one outlet), seen the business rebound since then and have determined that, while the store count isn’t growing given Canada’s small population, existing sites will be enlarged and-or worked over to bolster productivity and strengthen designer partnerships. Some units will be completely overhauled; some could be relocated.

The expansion comes at a time when competition is intensifying in Canada, with Nordstrom Inc. seeking sites, J. Crew entering the country in the last year, Target Corp. marching in next February, Hudson’s Bay Co. also spending big on modernizing and designer boutiques filtering in. But Derbyshire said, “The competition has always been intense and online is increasing the competition.” Moreover, he feels Holt competes with retailers outside Canada, since many of his customers are world travelers prone to spreading their discretionary dollars at Neiman Marcus, Lane Crawford, Saks Fifth Avenue and similar stores, along with Holt.

In the first leg of the expansion journey, Holt Renfrew in the Yorkdale Shopping Centre in Toronto will double its space to 120,000 square feet by August 2013. “It’s going to be a spectacular store and a real showcase for many of the world’s luxury brands,” Derbyshire said. “We are building a grand atrium and a complete second floor that just did not exist before. It’s a big undertaking.”

At Yorkdale, built in 1964, “Men’s is an area of great focus, from how we buy our product to how we merchandise, market and create the in-store experience.” The strategy entails creating a new men’s shop, at 18,000 square feet, compared with the old 11,000-square-foot setting, including Gucci, Alexander McQueen, Etro and Dolce & Gabbana. Also, a new 7,000-square-foot contemporary department will, for the first time, combine men’s and women’s merchandise with Rag & Bone, Vince, Burberry Brit and Marc by Marc, among other labels. Derbyshire said statistical evidence, focus groups and observations by the Holt team show that 85 percent of the time, men’s purchases are influenced by women.

In addition, Holt at Yorkdale will create a two-story atrium and a two-story facade expanding in length from 300 to 600 feet to showcase leased luxury shops; digital “moments” to engage visitors, and a new designer apparel department introducing labels such as Prada, Stella McCartney, Pucci, Comme des Garçons, Isabel Marant and Kenzo.

“Yorkdale is the recipe for the growth right across the organization. We will take these elements and incorporate them into every one of our properties,” Derbyshire said.

Derbyshire became president in January 2010, pushing out the former president after the recession hit hard. The business has turned around, according to Derbyshire, who said revenues rose 21 percent through 2010 and 2011. Year-to-date, women’s shoes are up 18 percent; designer handbags, up 39 percent, and jewelry and fine watches, up 34 percent. He said there’s been a 17 percent increase in full-price selling since 2009 with a reduction in promotions from 16 to four, and shoppers on average spending 26 percent more since 2010.

“Right now, we are on fire. Today kicks off our 175th anniversary celebration, and our results are the strongest in the history of the organization,” Derbyshire said. “We’ve built a solid foundation enabling us to grow.”

Derbyshire attributed the recent growth to the program he implemented that puts “a big focus on vendor partnerships.…If you look at our top 20 brands, they’ve increased an average of 33 percent for 2010 and 2011,” he said, citing Yves Saint Laurent, Prada and Tom Ford as among the leaders. “Our goal is to have those brands double in the next three years.” Three- and five-year plans with the brands have been developed, rethinking how each is presented, where they are located, the advertising and marketing as well as the volume objectives.

Derbyshire said Holt’s sales associates have immersed themselves in product knowledge to better understand brands. “We take them to New York, Milan, Paris, right into market, and we also have the vendors come here to Canada. It’s us going to them and them coming to us. It leads to a great understanding of the product, which leads to a more authentic store experience that customers relate to. If you go back to 2009, we had 56 associates who were $1 million sellers. Now we have over 120 who are $1 million sellers.”

Derbyshire characterized 2010 as Holt’s most profitable year, said 2011 was also strong, and that the company is tracking another record year for 2012. “The growth is profitable growth largely because we got back to full-price selling, created excitement, had the right product shipped, and because we have a sales team that is authentic.”

Derbyshire said it was premature to discuss specific growth plans at other sites, though he did say the Vancouver site could be enlarged, and acknowledged it was time to update the Bloor Street flagship in Toronto, which is Holt’s largest-volume unit. He emphasized that across the chain, in women’s ready-to-wear, shoes and leather goods, “we’re going to dominate, plain and simple.”

The disclosure of the expansion on Thursday was fitting in light of the 175th anniversary celebration, which kicked off the same day with a new awards program for employees, a street party in Toronto and a 12-minute film tribute to Holt Renfrew, in 3-D, on the Bloor Street facade. A wave of appearances by designers and celebrities, including Sir Elton John at the Bloor Street store on Saturday, is also scheduled over the next week. There’s also a slew of commemorative products from designers, in Holt’s signature magenta, including peep-toe platform slingbacks from Christian Louboutin, suede pumps from Manolo Blahnik, as well as Diet Coke bottles; dresses from Alice + Olivia and Roberto Cavalli, canvas totes from Michael Kors, a Giorgio Armani lipstick and a David Yurman beaded necklace with signature 18-karat gold rondelles and shimmering mixed tourmaline. Holt is also sending off a pop-up truck that will travel across Canada from Quebec to Vancouver.

Holt Renfrew began as a cap and hat shop in 1837 in Quebec City. In 1986, W. Galen Weston and family acquired the company and triggered a wave of renovations, store openings, new designer and brand shops, though officials said Thursday that the current expansion is more aggressive in its shorter time frame. Weston is chairman of the Wittington Fashion Retail Group, the holding company for Holt, Selfridges in the U.K. and Brown Thomas in Ireland. Selfridges is also expanding with a big budget for capital improvements, systematically revamping its Oxford Street flagship, which recently unveiled a new men’s designer area, and will soon open larger and dramatic halls for men’s shoes and beauty.

While Holt’s focus is again on brick-and-mortar, Derbyshire said, “We certainly continue to invest in our digital presence. However, within our group, Selfridges has taken the lead. We are staying close to that.”