The department store is headed for the toughest market share battle in its 176-year history, with Nordstrom and Saks Fifth Avenue chains invading Canada. 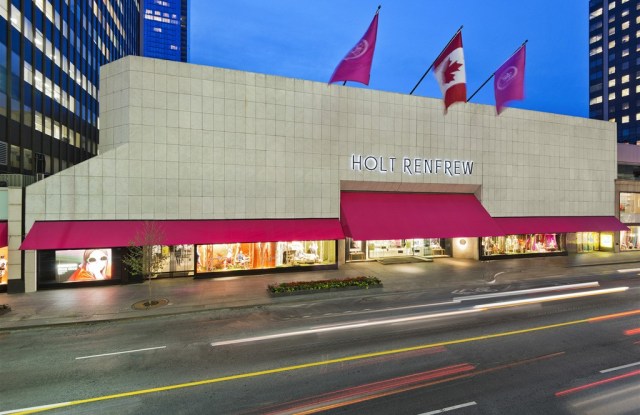 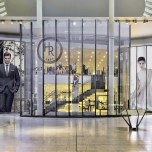 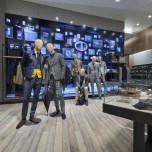 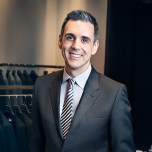 “We are Canadians. We are based here. We know the Canadian market.”

This story first appeared in the June 25, 2014 issue of WWD. Subscribe Today.

That’s Mark Derbyshire, president of the Toronto-based Holt Renfrew, stating his case for transcending the competition.

The $800 million Holt Renfrew is headed for the toughest market share battle in its 176-year history, with the much larger Nordstrom and Saks Fifth Avenue chains invading Canada with multiple locations. Nordstrom makes its debut in Calgary in the fall and sees up to nine full-line locations. Saks sees seven full-line stores and makes its debut in fall 2015 by carving out space inside the Hudson’s Bay flagship on Queen Street in Toronto. The Nordstrom Rack and Saks Off 5th outlet chains are also coming to Canada, with dozens of sites expected.

In response, Holt Renfrew has unleashed a program of heady expansion and renovations to grow the real estate footprint by 40 percent within the next four years, achieve $1 billion in revenues by 2017, tighten its grip on the country’s luxury market and solidify designer partnerships. Holt has maintained a steady schedule of designer appearances over the past few years with Joseph Altuzarra, Oscar de la Renta, Donna Karan, Mary-Kate and Ashley Olsen, Victoria Beckham, Margherita Missoni and, most recently, Domenico Dolce, Pharrell Williams and Tamara Mellon, among others. Also on tap, a long-overdue e-commerce Web site following the arrival of Jonah Sigel, former head of digital for Starbucks, last fall.

Yet the ace in the hole is already built in — the home-court advantage, at least on the luxury end.

“We have a very local focus,” Derbyshire told WWD. “We have a unique global lens on international luxury and fashion and an ability to focus that on Canadians and our markets. It’s a significant competitive advantage.”

Presentations at Holt Renfrew stores, whether in Vancouver, Montreal, Calgary or Toronto, are not the same, Derbyshire explained. “The seasons are different. Vancouver is not dealing with snow. Calgary does deal with snow. Our sizing models are very different. The cultures are extraordinarily different. In Calgary, our customers are very cosmopolitan; they love sophisticated, fashionable suiting and understated luxury, including brands such as Akris and Brunello Cucinelli.”

In Montreal, Derbyshire said, “the customer may especially celebrate color and European tailored clothing. Italian styles are popular, as are more fitted silhouettes, whereas in Vancouver, the customer may respond exceptionally well to fine jewelry, and we stock additional smaller sizes of ladies designer footwear” for the city’s large Asian population. In Toronto, the merchandising approach is “very balanced between leading edge and forward styles and a conservatism.”

For sure, the Holt team is breathing easy now that Saks and Nordstrom are bypassing Bloor Street — the Rodeo Drive of Toronto with its concentration of designer and upscale shops. And Holt is building its presence there. At 100 Bloor Street, the company’s first freestanding men’s store launches this fall. Derbyshire describes it as a “classic sartorial store that feels resolutely modern.” At the Holt flagship at 50 Bloor, a two-year upgrading and expansion project commences later this year. And in a symbolic gesture at the flagship, new awnings in Holt’s signature magenta were put up a month ago.

“In my mind, Bloor Street is absolutely the heart of luxury in Toronto,” said Derbyshire.

About a mile and a half away are the Toronto locations chosen by Saks and Nordstrom. Saks will be inside the Hudson’s Bay flagship by Queen Street, and just across the street is the Eaton Centre, where Nordstrom will be housed on the opposite end of the mall. The Queen Street area is loaded with shopper traffic, yet has an aura and shopping population some see akin to Manhattan’s 34th Street, challenging Saks and Nordstrom to convince certain designers and upscale brands to sell them there, particularly the luxury leaders like Chanel, Prada, Dior, Céline, Lanvin, Gucci, Balenciaga and Louis Vuitton. That’s particularly true with the ready-to-wear collections, while accessories have wider distributions.

“Luxury players are very mindful. They are not necessarily looking for new points of distribution,” Derbyshire pointed out.

“The area is much more upscale than Herald Square,” stated Richard Baker, chairman and chief executive officer of Hudson’s Bay Co., parent of Saks, which should be determining its designer lineup this fall and would already be in talks. “It’s more like the World Financial Center,” now called Brookfield Place, in lower Manhattan. “There are businesspeople, young executives. Traffic is very strong.”

“It’s going to be hardball especially for the 10 or 12 most important designer names,” observed Arnold Aronson, managing director of retail strategies at Kurt Salmon. “Saks has a very persuasive position with designer companies since it does a substantial business with them in the U.S. and Toronto is their very first entry to Canada. They want to make a statement and have announced they are building a superluxurious store.” On the other hand, “Holt has the advantage of being the incumbent and making major efforts and investments to retain their relationships.”

“The question is, where do the brands want to be?” said Robert Burke, president and ceo of Robert Burke Associates. “Many of the brands will want to align with Saks. Saks has big plans for Canada. Richard Baker doesn’t do anything small. And Saks understands that the brands want their own personalized spaces. Ultimately, customers go where the product is and where they can get customer service. Saks will be very aggressive getting product.”

“Canadians know Saks and will shop there,” said retail analyst Walter Loeb. “But Canadians are very loyal to their home brands and will continue to show a preference for them. Saks will have a tough time in their initial days. It will take a long time before it’s profitable in Canada.”

“To Holt’s credit, they’re renovating stores, beefing up service and launched hf2,” said Mark Cohen, the former ceo of Sears Canada who’s now a professor at Columbia Business School. “But they’re going to feel the pressure of all of this new competition. Nordstrom isn’t going to hit them particularly hard with respect to assortment. It isn’t as high end, but if Nordstrom delivers their signature presentation and customer service, it will give Holt a run for their money in that regard. Nordstrom has built its business upon doing what they do successfully in many locations, though the Eaton Centre location is specious. It’s a transit hub like 34th Street.”

Saks, unlike Nordstrom, Cohen added, “has never been able to deliver a consistent offer across all of its stores. It’s primarily built and based upon its Manhattan flagship. Saks’ Queen Street location is problematic at best. I would have put Saks on Bloor Street to get the full benefit of where the affluent customer shops. They will have trouble because Holt has exclusives and many [designers] will not be eager to upset the status quo.”

“This will be a mixed bag with some of the highest-end designers not wanting to break exclusives with Holt and Harry Rosen,” the men’s wear chain, said Antony Karabus, president of Hilco Retail Consulting and a resident of Toronto. “Many of the other brands will want to sell to Saks given its strong global name and because they sell to them in the U.S.”

“We have always had competition in Canada,” Derbyshire said. “The designer product is available in their own boutiques right around the corner” from Holt’s Bloor Street flagship. “It’s available online. Customers are well-traveled,” meaning they visit world capitals where designers all have shops.

“We set out in 2010 a five-year strategy and we always believed there would be more competition. At the end of the day, competition brings out the best in us. I take competition very seriously. It’s not with bravado that I say I am confident in our strategy, our team, the vendors’ distribution and in the customer relationships we have built. We are at the forefront of luxury in this country. We brought some of these [upscale] vendors into this country and have shared customers with them for generations. We know Canada. We know the market. We know international luxury. We are evolving our shops, our brand. We are a Canadian shop for Canadians with an international lens” on fashion. “We are not chasing someone else’s strengths. We are leading with our strengths.”

Holt, which already operates 10 luxury units and two off-price stores, has deep pockets as part of privately held Selfridges Group Ltd. controlled by Canadian billionaire W. Galen Weston. Around $60 million is being spent to upgrade and expand the Ogilvy emporium in Montreal to 220,000 square feet from 140,000, thereby becoming the biggest unit in the Holt Renfrew chain, which bought Ogilvy in 2011. It’s begun rolling out hr2, an off-price format with two stores currently and no other sites divulged, to preempt the Saks Off 5th and Nordstrom Rack operations. In addition, a 120,000-square-foot Holt Renfrew will open in spring 2016 at Square One Shopping Centre in Mississauga, Ontario.

Holt’s Yorkdale store, which doubled its size to 120,000 square feet and completed a $50 million [Canadian] renovation in February, is seen as the prototype for how other Holt locations elevate their shopping experiences. Yorkdale showcases a denlike men’s department called The Lounge, which sells Fendi, Tom Ford and Jimmy Choo, among other designers, and offers free shoe shines and free straight-razor shaves on vintage barbershop chairs. There’s also an area integrating contemporary men’s and women’s apparel to encourage the sexes to shop together; the Holt Cafe, where a chef will take an order and customize it; a cobbler service in the shoe hall, and a beauty bar providing, as Derbyshire said, “completely unbiased opinions of what’s best for you.”

Behind an unmarked door, sequestered on one end of the second floor, lies “The Apartment.” The 1,000-square-foot residence-in-the-store, designed by Janson Goldstein, has a living room, a kitchen and an en suite bathroom, and for each booking, fresh flowers and food at the client’s bequest are brought into the special setting for wardrobing, personal styling, trunk shows and parties. “This is unparalleled luxury,” said Derbyshire, during a tour of the store. “Everything is completely tailored to meet the needs and tastes of our customer. It’s an escape where you can take a friend or 10 friends. But we are very discreet as to who has access to this apartment.” And no customer gets access unless Derbyshire approves.

Yorkdale, Derbyshire said, is Toronto’s second-biggest market for luxury next to Bloor Street and the “beacon as to what a luxury specialty retailer is all about. Elements of Yorkdale will be a part of what we do on Bloor Street, in a Bloor Street way,” and similarly tailored to other locations. “This store isn’t as compartmentalized as other department stores. We’ve broken down more of those traditional department store walls and taken an holistic point of view in designing the store. I am a big believer that it’s about the experience. It’s all about how you feel, what you anticipate and what you feel when you leave. Whether it’s getting your shoes stretched by our cobbler, scotch tastings in the men’s lounge or spending the afternoon at the Apartment, it’s all about us giving you an experience. At this point, we see Apartments in all of our markets. That’s our intent. Some may be bigger, some smaller. Our Bloor Street Apartment might be 1,500 square feet.

“All of these ideas really came out of us spending a lot of time talking with customers,” Derbyshire said. “I took hundreds of ladies out for lunch, breakfast or coffee.”