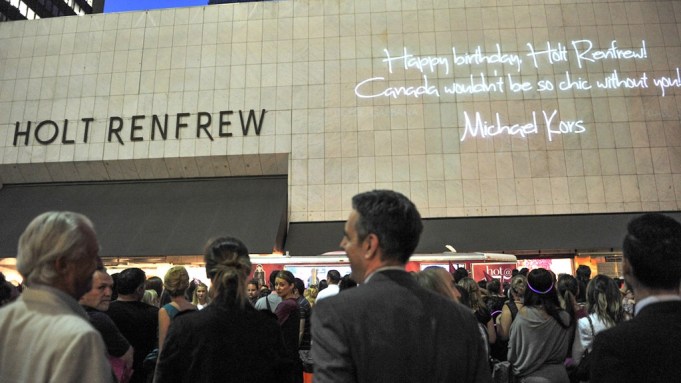 For its 175th anniversary celebration in September, Holt Renfrew went all out with a wave of appearances by designers and celebrities, including Sir Elton John at the Bloor Street flagship, a street party in Toronto, a 12-minute film tribute to the store (in 3-D) on the flagship facade, a stepped-up awards program for employees and a slew of commemorative products from designers, in Holt’s signature magenta.

“We approached our key vendors to share in the celebration and create unique and exclusive products. They became keepsakes,” said Pat Di Bratto, Holt’s senior vice president of buying and merchandising.

To attract an audience across a spectrum of demographics, the range of exclusives was wide, from a $16,800 David Yurman mixed colored stone necklace and Max Mara $3,840 ostrich handbag, to Kate Spade iPhone cases, priced at $40, and Diet Coke at $7 for a six-pack. Christian Louboutin went on the edge, creating a “trash” shoe adorned with pencil shavings, tickets to runway shows, business cards, metro cards and other things likely to be otherwise discarded. “He did 50 pairs. Every one was different,” Di Bratto said.

There were also suede pumps from Manolo Blahnik, dresses from Alice + Olivia and Roberto Cavalli, canvas totes from Michael Kors, and a Giorgio Armani lipstick. Holt dispatched a pop-up truck to travel across Canada from Quebec to Vancouver. “Most of the product development took six months, but we talked to vendors a year in advance,” Di Bratto said. “We were selective in our approach. We didn’t want to overquantify.” Basically, the commemorative product was a sellout, though officials said some Diet Cokes can still be purchased.