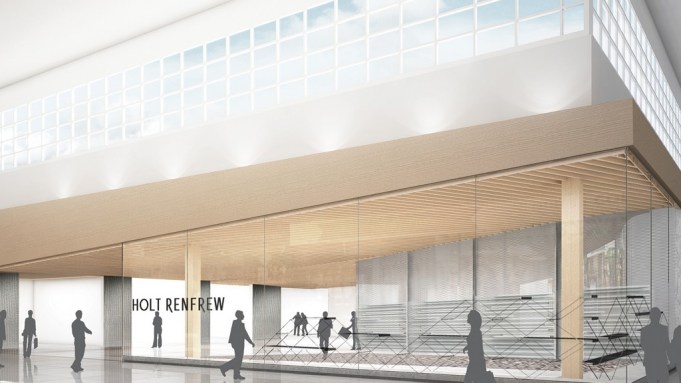 First impressions count, and Holt Renfrew is hoping for a really good one with its store in the Yorkdale Shopping Centre in Toronto.

It’s undergoing a complete overhaul, doubling its size over the next year and representing the first leg of a three-year, $300 million journey to upgrade and expand all nine units in the Holt Renfrew fleet. The chainwide program calls for renovations, relocations and a 40 percent increase in square footage, but no increase in the store count.

“Yorkdale is the beta-test store for the other stores,” said Natalie Penno, vice president of operations.

Standing next to a scale model of the Yorkdale prototype, Penno explained that the store is being re-created from a standard department-store format to a series of specialty stores contained within a much bigger box that will house some never-before-seen concepts that could be cloned to other Holt locations.

“It’s not a traditional racetrack layout,” said Penno. “Every department will have its own personality and become a place of discovery.”

“The format is new. It is innovative. But we’ve mitigated the risk, because it’s based on things we’ve done before, and it’s based on listening to customers,” said Holt Renfrew’s president Mark Derbyshire. “It reflects what employees and what our vendors want to see, and at the very heart of it all, it’s what our customers want.”

Among the most dramatic elements of the Yorkdale prototype:

• Space overall will double to 120,000 square feet from 60,000 square feet. Holt is creating a 22,000-square-foot second level out of a former food court and converting a parking lot into a selling area.

• A two-story facade [rare for mall retailing] with a 30-foot-high glass wall by the entrance flanked by two 30-foot-by-15-foot video walls for fashion shows and live feeds. The frontage widens to 600 feet from 300 feet for a clear view of the grand staircase, creating a theatrical and spacious ambience.

• Prada, Chanel, Gucci and Louis Vuitton will have their own entrances.

• Footwear will quadruple to almost 10,000 square feet, with a shoe hall spotlighting Gucci, Jimmy Choo, Prada and Stuart Weitzman, and a Christian Louboutin “apartment” modeled after the Louboutin space in Selfridges.

• Leather goods will at least double its space to about 10,000 square feet; jewelry and watches will triple their space. Leather goods and women’s shoes are “dominant areas,” with front-and-center positioning in the store, Derbyshire noted.

On Friday, a reenvisioned men’s floor with 18,000 square feet compared with the old 11,000-square-foot setting, makes its debut, giving shoppers a taste of things to come. Like leather goods and women’s shoes, men’s wear is an area of great focus and opportunity for Holt Renfrew, which is apparent from an innovative feature within men’s called the Lounge. Far from being a place to just kick back while the spouse combs the store, the 4,000-square-foot Lounge, said Penno, is “experiential,” offering a variety of men’s services. There’s a grooming area, where you can get a shave, a made-to-measure shop for customizing the fit and details of garments, a wet bar and a men’s assortment that will change on a monthly basis and be highly “curated” to showcase the latest and coolest styles so men can see a sampling of what’s in the store and get some quick shopping ideas. “The Lounge will be very directional and very approachable,” Penno said. Elsewhere in men’s, there will be six hard shops including the first Paul Smith shop-in-shop and shops for Gucci, Dolce & Gabbana, Giorgio Armani, Burberry and Ralph Lauren.

With women’s as well, Holt is thinking out of the box. A 7,000-square-foot contemporary department will, for the first time, integrate men’s and women’s merchandise from Rag & Bone, Vince, Burberry Brit and Marc by Marc Jacobs, among other labels. Holt Renfrew executives have concluded that based on statistical evidence, focus groups and their own observations, 85 percent of the time in contemporary sportswear, men’s purchases are influenced by women. “We’re seeing a real crossover in contemporary,” Derbyshire said.

There will also be integration of men’s and women’s products in sunglasses, jewelry and watches with such brands as Tag Heuer, David Yurman and Links of London. On the other hand, the merchandise remains segregated in designer, where women mostly shop without men by their sides, Derbyshire said.

The women’s floor overall, said Penno, won’t read as if you are walking into a lineup of designer shops, and will instead have an open format for flexibility so the team can quickly change the merchandise depending on sales results, trends and arrivals. There will be a new designer apparel department introducing labels including Prada, Stella McCartney, Pucci, Comme des Garçons, Isabel Marant and Kenzo.

Cosmetics will double in space to 10,000 square feet and feature a beauty bar where the beauty experts aren’t tied to any brands and will be “unbiased” in recommending beauty regimens and products, Derbyshire said. There will also be a brow bar, manicures, blowouts, a Chanel shop for fragrance and beauty, and an Hermès fragrance shop.

The store is being staged with a series of launches as construction on different departments gets completed, leading to the grand reopening in the fall of 2013. The renovation work on the Yorkdale store, which was built in 1964, began last July.

“We have been progressing at a very fast cadence,” Penno said, despite the apparent complexities of creating an elevated shopping experience. “There is an enterprising spirit that lives in this company,” added Derbyshire.