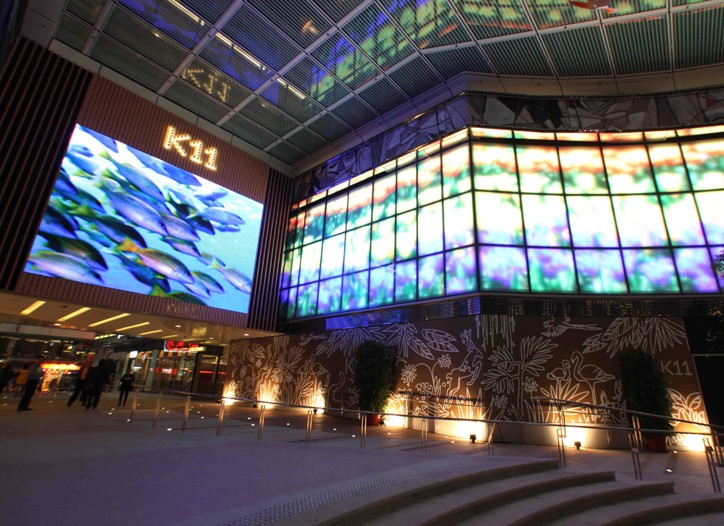 The space, K11, is dubbed the world’s first “art mall” and is the brainchild of Adrian Cheng, whose retail pedigree is enough to give competitors pause. Cheng’s grandfather, Cheng Yu-Tung, is the billionaire founder of New World Development, one of the largest retail and real estate firms in Asia. Adrian Cheng, 31, is the executive director of New World Department Stores China, overseeing nearly 40 department stores in the Mainland, and the director of Chow Tai Fook Enterprises, which manages nearly 1,000 Chow Tai Fook jewelry stores across Asia.

“Hong Kong retail is boring; it’s all about brands,” said Cheng, who decries the trend to open large luxury or high-end brand flagships to draw customers into traditional malls. “Inside, these malls have no character.”

Instead, Cheng asserts Hong Kong needs something new that will provide “street entertainment” as well as shopping and dining opportunities. “I asked myself, ‘What do I believe in?’ and the answer was art, people and nature,” said Cheng, whose aim is to develop “high-energy” retail by creating multifaceted spaces. For this art mall, Cheng worked with the local government’s Urban Renewal Authority to conceptualize the project, which cost $3 billion Hong Kong, or $386.7 million, to complete.

The new mall, with its deliberately ambiguous name, covers 340,000 square feet and features 100 stores as well as a verdant, open-air piazza. More importantly to Cheng, it is also an art gallery. “I tried to think outside the box. At 340,000 square feet, it is the perfect size for a museum. It’s a simple, round shape — perfect for a [walking] tour. So I placed exhibition windows between the shops — all of the shops. Even in the busiest area, you can see art,” said Cheng, who spent 20 million Hong Kong dollars, or $2.6 million, on a permanent collection for the mall, which will also showcase new pieces from local artists.

“Local artists lack a platform and lack resources. I know some people think this is a gimmick, but really, 80 percent is a mission and 20 percent is a gimmick. We really want to promote local artists and expose their work to the masses,” said Cheng. The company has even developed an iPhone application so visitors can take a guided tour through the six-story mall as if they were in a museum.

As Cheng started collecting pieces for the mall, he soon realized there was a theme: nature. For example, “The Root” by Danny Lee Chin Fai is a 26-foot-high stainless steel tree rising up from the mall’s basement to the levels above; “Gene” by Kum Chi Yung is a collection of acrylic fruits suspended from K11’s ceiling, and Man Yi Fung’s “Wisdom of Nature” provides seating to visitors in the form of sculpted seeds. Also impressive is “Waving in the Wind,” an 8-foot-long LED waterfall created by Chinese University professor-artist Mok Yat Sun with his students.

Cheng admits selling his high-minded concept to potential tenants was not easy, especially given the economic climate. But as the idea evolved and Asia began to emerge from recession, finding tenants became easier. The mall opened with 80 percent occupancy.

Mixtra, a new multibrand concept, showcases a mix of sports, fashion and art in a space spanning 20,000 square feet and three floors. The store has its own soccer pitch as well as high-tech track and field equipment, and sells such names as Adidas by Stella McCartney and Puma Black Label.

Cheng is confident his art mall concept will take off, but he is not waiting for the results to roll in before he expands K11 to other cities. One will open in Wuhan in June, Shanghai will follow in mid-2011 and five more Mainland cities are in the pipeline, for a total gross area of 10 million square feet.

“We aren’t guaranteed success, but I can say I tried,” Cheng said. “There has been a lot of encouragement. This will be a year of great change. And even if I don’t succeed, I’m young — I can always try again.”