The Latina customer is being embraced by junior-driven Hot Kiss. 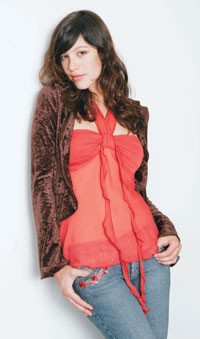 First Kiss is in about 1,200 stores, including Mervyn’s, Kohl’s, Charming Shoppes, Meijer, Sears and Goody’s.

Latina spending power is growing. Hispanics represent the largest and fastest-growing U.S. minority at 42.5 million people. By the end of the decade, that population is forecast to grow 22.6 percent to 52 million, according to the U.S. Census Bureau. By 2007, the estimated purchasing power of Hispanics may top $926 billion.

Hot Kiss joins a growing group of apparel players catering to the Latina market, especially those selling to midtiers and mass market chains. Sears plans to roll out a misses’ line called Latina Life in partnership with Latina magazine in August. Last year, Kohl’s signed on with Daisy Fuentes for a colorful collection of offerings including chiffon ruffled camisoles and floral beaded skirts. In 2003, Kmart was a partner with Mexican singer Thalia Sodi to create a junior line featuring rhinestone T-shirts and spaghetti-strap georgette dresses.

In addition, First Kiss is appealing to its parent company because Hot Kiss doesn’t have to reinvent itself for it. President Jay Kester said Hot Kiss’ proven sellers are simply modified to sell at a lower price point within about 45 days. Wholesale prices range from $10 to $15.

“It’s about cost-engineering,” said Kester, who hopes for first-year sales of $12 million.

“It’s about exploiting real estate in other areas of the store,” he said.

Gluck has linked Hershey’s Kisses with First Kiss in a giveaway at Grand Rapids, Mich.-based Meijer, a chain of 171 retail and grocery supercenters in Michigan, Illinois, Ohio, Indiana and Kentucky. The retailer tested the line in 100 stores. It will roll out First Kiss in two weeks and expects to implement another promotion with Pepsi, said Chad Haring, Meijer’s division merchandise manager of women’s and junior apparel.

“It far and away looked fresher and newer than any of the options out there,” Haring said. “And the nice thing about the line is that it’s not pigeon-holed to Latinas, but addresses them as well as others.”

Hot Kiss licensed the First Kiss line two years ago with a kick-off at WWDMAGIC, but never shipped it. Kester said this time it made sense to keep the brand in-house, while relying on its licensing companies for the balance of product, including accessories and shoes. Mervyn’s will test an order of First Kiss handbags for back-to-school. Zellers is selling First Kiss socks and swimwear, and intimates launch next.

Another newcomer to the Latina market is Los Angeles-based Chica, a junior T-shirt line known for its cheeky sayings. It is launching a lower-priced line called Corazon at 100 Wal-Mart doors in August, including stores in Fresno and Panorama City in California and national locations such as Dallas, Santa Fe, Orlando, Fla., and Miami. The line will wholesale at $5, compared with Chica’s $9 price.

“We wanted to address the needs of the Hispanic consumer at Wal-Mart or else Wal-Mart would’ve found another vehicle,” said Christopher Griffin, president of Chica, who predicted that by 2006, both brands can do upward of $50 million wholesale.