Hot Topic Inc. struck gold with its license for “Twilight,” the hit teenage vampire movie, but what does it do for an encore? 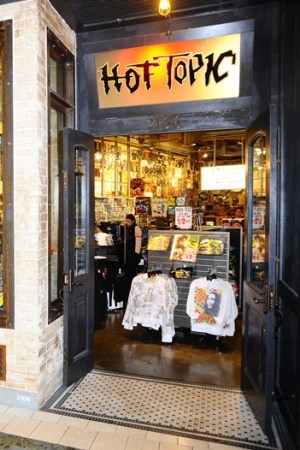 Hot Topic Inc. struck gold with its license for “Twilight,” the hit teenage vampire movie, but what does it do for an encore?

Company executives, as well as analysts, credited the film’s momentum and sales-related licensed merchandise for an 11.4 percent climb in third-quarter profits and bolstering a turnaround. However, as retailing goes through one of its most difficult periods, and with no clear end in sight, the pressure to find the next big thing is intensifying.

The mall-based retailer’s comparable-store sales were negative from the second quarter of 2005 until October 2008. They have risen each month since then, increasing 6.5 percent in November, 4.3 percent in December, 6 percent in January and 10.8 percent last month.

“As you move away from movie release, the popularity of that license will fade; it’s a fact,” said Adrienne Tennant, a retail analyst at Friedman Billings Ramsey who covers the company. “People have been saying ‘Twilight’ is a one-hit wonder for months now, but how do you explain continued improvement now? It looks like the company is successfully studying their incremental customer’s behavior.”

Chief executive officer Betsy McLaughlin knows that “Twilight,” which has grossed about $191 million, will be hard to replicate.

“The strength of a ‘Twilight’ license comes along once a decade, maybe less,” she said. “It’s really a once-in-a-lifetime opportunity. I’m not sure there will be a next ‘Twilight,’ though there are multiple books and movies, it will have to be offset by multiple smaller licenses.”

The City of Industry, Calif.-based chain, which competes in the teen market with stores such as Wet Seal, Abercrombie & Fitch, Aéropostale, American Eagle, Metropark and Buckle, operates 679 units in the U.S. and Puerto Rico. The company also owns 159 Torrid shops, a plus-size business targeting a similar audience.

Music is an essential component of Hot Topic’s strategy, and one the company is relying on to drive growth. The chain has tried to position itself as a go-to store for the ages 12 to 22, and focuses heavily on edgier, independent groups like Franz Ferdinand and Beirut. The company launched a music Web site, ShockHound, in October 2008, which members can use to purchase MP3s and music merchandise, connect to others through a social network and access music-related editorial content. The strategy was developed in March 2007, part of a broader move toward positioning the chain as a place to discover new music, not just buy related merchandise.

“Your badge of honor now is not what you wear, it’s what’s on your iPod,” McLaughlin said. “I wish we would have figured it out 18 months prior, but we didn’t. By the end of ’06, it was very clear we were going to have to reinvent ourselves. So we came up with this strategy. We’re trying to reposition ourselves as the place that people can come in and find new music.”

Hot Topic’s share price, which reached a low of $4.04 in the last 52 weeks, closed Tuesday at $9.05, up almost 3.7 percent. As recently as January 2007, shares slid 12 percent after the company lowered its fiscal fourth-quarter 2006 earnings estimates by more than one-third, citing slow sales in music, women’s clothing and accessories. Hot Topic will report its latest fourth-quarter earnings today.

The product assortment and in-store merchandising shifted in 2007 to reflect up-and-coming trends in rock music — making the chain less dependent on major artists and more oriented toward midtier and small bands. Since the revamp, comps showed a slow but steady climb. For the first quarter of 2008, Hot Topic comps declined 2.8 percent and were off 0.6 percent in the second quarter before turning the corner in the third quarter.

Among teen retailers, the depth of the commitment to music and music-themed merchandise is uncertain. “Whether it’s a lead or a backseat varies, but right now the music industry is in such turmoil that a lot of music-only retailers [such as Tower Records] are going out of business,” said Jessica Ried, associate director of Research & Insights at Resource Interactive. “That leaves an opening for some stores to use music to lure in customers to shop for other things.”

To capture the music-oriented market, Wet Seal has been teaming with celebrity musicians for promotions, including Jordin Sparks and Fall Out Boy. Company executives said they’re experimenting with other initiatives, though wouldn’t disclose specifics.

“We’re not looking to get into the business of selling CDs. That’s just not profitable,” said Maria Comfort, Wet Seal president and chief merchandise officer. “Our customer doesn’t typically have a destination in the mall. If anything, we’re looking to gain in share of foot traffic.”

Maintaining comp growth in an economy that’s predicted to worsen will be a major challenge.

“Playing Monday-morning quarterback is so easy,” Reid said. “You have to take some of these big successes with a grain of salt. Abercrombie & Fitch, for example — people were singing their praises months ago, and now are knocking them for the same things they were cheering about. Right now it’s really about cash flow.”

Before integrating music into merchandising and making it a core strategy, Hot Topic had been running in the negative double digits for its music business, but by the third quarter of 2007 was positive in that segment, when the category comps were up 2 percent. It was the first positive comp since the first quarter of 2006, and a jump from the first quarter, when music was down 16 percent.

Hot Topic’s resurgence has come as the retailer decreased reliance on promotions, analysts and the company said.

Sustaining the recent performance is “going to be really challenging,” Ried said. “Almost every single [chain] in that category has some connection to music now, and it’s not going to be able to translate directly into sales.”

Hot Topic, however, has managed a delicate balance so far.

“Hot Topic has a definite point of view,” said Tennant of Friedman Billings Ramsey. “Other teen retailers don’t — they sell similar items to one another and are discounting and doing promos, therefore are going to struggle to compete for that customer pool. The customer has more time than money right now. She will wander around and compare and buy the cheaper goods unless you have something she is willing to pay full price for — things she can’t find in another store.”