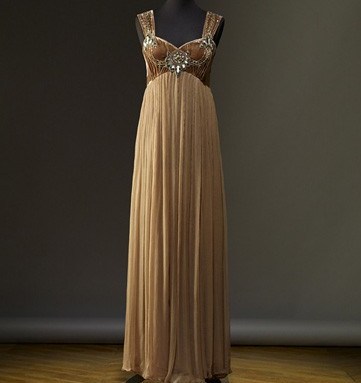 LONDON — Biba, the eclectic London emporium that drew customers ranging from Princess Anne to Twiggy during its Sixties and early-Seventies heyday, has been reborn yet again as a fashion brand.

House of Fraser, one of Britain’s leading department store chains, has purchased the company, along with distribution rights for 25 countries. The retailer is hoping to transform Biba into an affordable, cross-generational fashion brand with annual revenues of at least 20 million pounds, or $31 million at current exchange.

The line, which will not show on the runway, made its debut earlier this month at House of Fraser’s Oxford Street flagship and will be rolled out to the chain’s 61 stores by spring. By the end of this month, the collection will be available online in 23 countries at mybiba.com.

Biba’s latest comeback is the second in the space of five years: In 2006 a private investor, Michael Pearce, bought the worldwide license for the brand and launched a full Biba ready-to-wear, footwear and accessories collection. That line, designed initially by Bella Freud and later by a creative team under Hector Castro, showed on the runway at London Fashion Week. Price points were comparable to Marc by Marc Jacobs and Miu Miu. But the collections received mixed reviews, and the last show took place in February 2008. A few months later, the label was wound down.

Last November, House of Fraser purchased the rights to Biba from the Liechtenstein-based company Hachel International Foundation for an undisclosed sum.

“Biba had gone very designer, very catwalk — and that is not what this label is about,” John King, House of Fraser’s chief executive, told WWD. “It’s about fashion clothing at an affordable price. Our aim is to capture the ethos of luxury and glamour that Biba embodied, bring it up to date, and make it appealing to mothers and daughters alike.” British model Daisy Lowe is the face of the brand.

The new collection is filled with tailored jackets with nipped waists and puffed shoulders, drapey knits, printed shifts and embellished evening gowns. Prices range from about 35 pounds, or $55, for an embroidered viscose top to about 400 pounds, or $624, for a long evening dress. There are five different fits of jeans, costing about 65 pounds, or $101, each.

King said the sales target of at least 20 million pounds should be achieved fairly quickly.

“It helps when you have the resources behind you: We put millions into the shop fit, for example. For us, this is as much a retail project as it is a new brand,” he said.

Ten Biba flagships will be set in House of Fraser stores; some will span 1,900 square feet, while others range in size from 1,000 to 1,600 square feet. All of them will feature brushed gold tiles and the black-and-gold Biba logo.

In regard to the Web site, King said that after a soft launch in late August, the U.S. has become the top foreign market, followed by France and Australia.

The launch of Biba is part of a wider strategy by House of Fraser to bulk up its own-brand portfolio, a fast-growing category. The store stocks 700 brands, including 12 in-house labels. By spring, it plans to have a total of 15 in-house labels, including its current licenses for Kenneth Cole and Episode.

The original Biba, which opened in 1964, was London’s first postwar department store, a temple of fast-and-cheap fashion that epitomized Swinging London. The brainchild of the Polish-born fashion illustrator Barbara Hulanicki, Biba boasted everything from a restaurant, the Rainbow Room, and a food hall to a makeup counter and children’s toy shop. During its 11-year lifespan, Biba became famous for its fashion offerings — a blend of Art Deco, Victoriana, and Hollywood glam — and racks of bowed blouses, piles of platform heels and floppy hats.