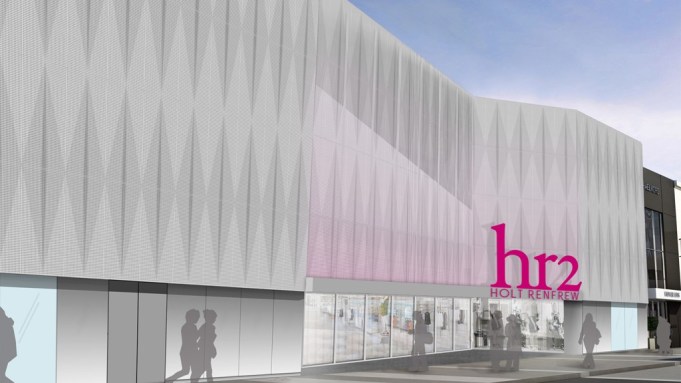 At hr2, Holt Renfrew’s upcoming secondary chain, there’s a clear mission: capture the contemporary market in Canada before the competition does.

Yet hr2’s leader and vice president, Heather Arts, says there’s been no rush to pounce.

“Hr2 is something we’ve been looking at for over two years internally. It’s not just a reaction to the expansion of all the competition from the U.S.,” said Arts, who was previously Holt’s vice president of special projects. “We’ve identified an opportunity with vendors. They’ve got so much product. Holt Renfrew can’t carry it all under its roof. There is nothing like hr2 in Canada at all. It represents a great opportunity to grow with vendors with whom we have great relationships already.”

Arts said that even though retailing in Canada has ignited with newcomers from the U.S., there’s still a gaping hole in the contemporary market that hr2 intends to fill. In addition, while women’s ready-to-wear at most stores has generally been weak, the contemporary sportswear component is performing well and growing.

Neiman Marcus and Barneys New York years ago launched secondary divisions to tap the contemporary business. Barneys has its Co-op, and Neiman’s has Cusp, though neither has entered Canada yet. But J. Crew has already moved in and Nordstrom, which has a large contemporary business, will enter the market in fall 2014 with a store in Calgary and visions of up to nine full-line stores throughout the country. The Hudson’s Bay Co. is also spending big on modernizing and contemporizing; designer boutiques are slowly filtering into urban areas, and Intermix has already made a move across the border.

Asked how hr2 will be different from U.S. chains such as Co-op or Cusp, Arts replied: “The contemporary part will be similar. The difference will be the experience when you come into the store.” Janson Goldstein, the architectural and design firm, which has worked with Holt Renfrew in the past, has developed “a wonderful concept” that will romance the product, particularly with the way hr2 plans to “curate” the product, Arts said.

As for the challenges of launching a new retail division, Arts replied, “At the moment, there really aren’t any. Our vendors have been very receptive. They trust us to get it right. We will display them carefully, at a very high level.”

In the rundown of hr2, Arts said the plan is for:

• Merchandising will be head-to-toe, and more by casual and career lifestyles and evening merchandise.

• Space will be devoted to seasonal themes, brand highlights and daily shipments.

• Buying, operations and planning teams have been created, separate from the Holt Renfrew team.

• Hr2 will not carry any of the same merchandise sold at Holt Renfrew stores, though the new retail division will be stocked with lower-priced or secondary labels from many of the same designers and brands that supply Holt Renfrew with their top-priced lines. There will, however, be a strong association with Holt Renfrew considering signs and logos will say hr2 with Holt Renfrew underneath. Hr2 shopping bags will have the same white and magenta coloring but in reverse from Holt’s.

• The stores will be designed to be contemporary, clean and minimal, so the merchandise stands out.
“The decor down to the fixtures, and the ambience, will be totally different from what’s out there,” Arts added, citing such design elements as a polished concrete floor, a 20-foot long runway of mannequins, sculptural lighting resembling mobiles, digital signage (as opposed to banners or paper signs) and an “inspirational wall” that could feature art installations.

• Flexibility on the selling floor to frequently adjust the displays rather than having hard shops. Hr2 will receive daily deliveries as product will be expected to move fairly quickly. “We will be out more frequently in the market than just the regular seasons,” Arts said. Those markets will include New York, Europe, California and Canada.

Holt Renfrew executives would not say how much volume they expect hr2 to generate but it should be significant considering the planned size of the stores and the success other retailers are experiencing with contemporary sportswear, where there’s been more fashion newness, novelty, sales growth and lower prices compared to other women’s areas.

Arts said she sees potential synergies between Holt Renfrew and hr2 and expects the two businesses will share information on brands and enter some showrooms together in some instances, but stressed that the merchandise at hr2 and Holt Renfrew will be totally different. Arts also said hr2 stores will be situated “somewhat of a distance” from Holt Renfrew stores to help reach a new customer, though she expects Holt Renfrew customers will shop hr2 as well.

Hr2’s target customer will be predominantly female, 25 and older, “who really appreciates great brands, maybe aspires to luxury brands. But hr2 will be providing more affordable and attainable fashions, and could lead to her shopping at Holt Renfrew as well,” Arts said.

“One difference between ourselves and the people we are competing against is that we are going to have merchandisers based in the stores [three per store] to maintain the look and feel and constant flow of product, so it maintains our standards, so sales people can focus on working with the customers. These individuals will learn and share certain practices with our team at Holt Renfrew.”

With the hr2 windows, “We are going to do something a little different visually, working with Chicago-based Bruce Mau visual firm, which helped design the logo, signage and packaging. “Signage will be digital, with not a lot of print. We are not going to clutter the front with a lot of signage.”

Hr2 will make its debut in March with a 30,000-square-foot store in Montreal’s Quartier DIX30 shopping center. Another location is planned for Ontario early next year.

“We are committed to this concept and pretty confident it will succeed, so we are looking beyond those,” Arts said. However, once the first two units open, “Give us some time to catch our breath [for tweaking the stores] before we go forward.”

The company expects to open hr2 stores across the country and about the same amount as Holt Renfrew. “We see ourselves as a national chain by the end of 2015. There is still a lot of great real estate out there. There’s a lot of development and growth,” Arts said. “We are pretty open to different types of locations,” from malls to street locations to lifestyle centers.

An hr2 Web site is not currently in the works, though “it’s something potentially down the road,” Arts added.

Hr2 pricing, she said, will emphasize “great brands at great value….Consumers will understand the value they are getting. What you see on the ticket will be the out-the-door price. We are not going to be screaming ‘40 percent off,’” though there will be end-of-season sales, and normal markdowns. The advertising will be more institutional and “won’t be screaming out brand names.”

Asked if she felt anxious at all about the project, Arts replied, “It’s definitely one of the highlights of my career. My experience has really focused on starting up businesses.”

She noted she was with Winners as a senior vice president and general merchandise manager when that business started up in the Eighties, and was also part of the team that started up Lowe’s in Canada, as a merchandising director.

“I am not nervous,” Arts said. “Maybe the night before we open, I will think differently.”